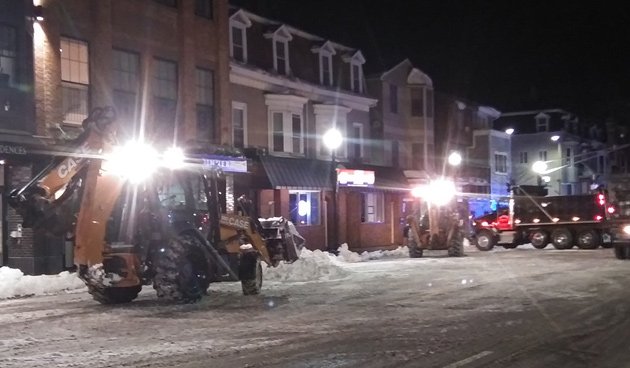 Eileen Murphy watched a crew clear the asphalt of snow along East Broadway in South Boston tonight, to drive it over to one of Boston's nine snow farms.

Get rid of it before it freezes on Friday.

Why do they call them “snow farms”?

the snow goes to the farm to live out the rest of it's long, healthy life.

How about cleaning up the neighborhoods?

Areas with high foot traffic should be prioritized.

What are we doing? We live in MA, a cold, dark, snowy corner of the country. The side streets are a mess, 6 foot piles of snow, then stinky, polluting front loaders and dump trucks trucking snow off to snow farms. People are mad because it snowed two feet, the sidewalks are impassible.

What’s the end game? What are practical, sustainable, sensible goals and supporting strategies for dealing with this? Does it involve spending a lot more money and burning a lot more diesel, re-orienting what we always do or doing less?

(I mean this in all seriousness. If you have a snarky, sarcastic remark, either keep it to yourself or come up with a better way to express yourself.)

Doing less is not an option.

Doing less is not an option. People need to be able to get around and services need to keep operating. If things are left without being resolved it will only get worse if we get hit with another storm.

Every few years we get a storm where we change how we do business. In 1978 it was prepping better in advance and trying to gauge traffic during major storms. in 1996 it was bringing in some melting techniques to get rid of excess snow. In the early 2010s it was following the Monrtreal protocol and moving big chunks of snow out of the way to make way for other big snow drops.

We did much better this time around than in the past. I remember when a well placed storm like this would wipe out urban schools for a week.

I keep hearing about these anti car and small town fantasies for Boston. That somehow only the handful of people who decided to move out of their parents homes in Newton to move to the big city living in 4k lofts should be able to access the city within a month of a major storm.

I want to make a sarcastic remark

But you asked for us not to.

At the end of the day, there is no real option that is not "sustainable." Some might not like Boston's technique for taking care of snow, and a lot of the gripers would look north to Montreal as a means of "taking care of" the snow, but that involves more "stinky, polluting" trucks either melting or trucking the snow. Either way, it's not that good and would end with whatever pollutants are in the snow eventually making their way into the environment anyway.

As far as sidewalks go, the most green method would be for the City to keep on not clearing the snow. Most of my neighbors use the carbon neutral option of snow shovels. I am fortunate to have an electric snow blower, which is not as effective as the large, gasoline powered models, but it gets the job done most of the time with less greenhouse gas output.

The greenest option, which would have the worst side effects, would be to do nothing, and by that I mean literally nothing. No snow removal at all. No trucks. But that would entail deciding that vehicles would not be able to operate in the city. To be clear, that includes buses, delivery vehicles including deliveries to supermarkets, and of course police, fire, and EMS.

At the end of the day, the system we have by and large works, so that's why it's the way things are done.

How do you figure that? How was the electricity produced? Probably not as green as you espouse.

But considering that 20% of the electricity mix is nuclear and a fair amount is hydro from Quebec, and also considering that natural gas is slightly greener than oil, I'd say that there is less greenhouse gas output. Not none, but definitely less.

Montreal uses trucks, but they do it efficiently. They have a truck that drives along picking up up snow in front and dumping it into a truck behind it. So they can drive along and do a street in one pass. Around here we don't have specialized equipment, so we drive a shovel back and forth to the end of the block to dump each shovelful of snow in another truck. It's a big waste of time and gas.

But to the main point

The trucks used in Montreal use fossil fuels, so they are hardly "sustainable."

Not saying that what Montreal does is bad, but they use more of the dinosaur juice to get it done. Boston not doing this (i.e., the City has never removed snow from the street in front of my house except, which is a different exercise than pushing the snow to the side of the road) is more ecologically sound. The "snow farms" are only put into place after major storms.

The base level argument is that we shouldn't live anywhere where we need to use so much carbon based energy to survive, but that's not a helpful lens. So the answer is that the city needs to at least own snow removal in any and all downtown areas (i.e. everything from Roslindale square to Copley) instead of relying on landlords and tenants to keep the core walking areas of our city walkable.

Ideally, the city should just clear the snow and build that into the budget. The problem is that the city can't really support enough snow removal infrastructure to quickly clear snow so customers in outer neighborhoods would probably need to shovel their own walks if they want them to passable within a few days of a storm like the one we just had. I certainly wouldn't want to wait 3+ days.

For years the City removed snow, then stopped. Except for certain areas ie: in front of bars and the Seaport district, where you would never know it snowed two feet.
New York and Montreal remove snow, not just plow it into the neighborhoods.

I've never had any government agency remove snow from my sidewalk. The only possible exception was that time in the 1990s when a plow made a 7 foot high mound on the corner of my mum's property. She made them move that.

Still, we even cleared our own sidewalks in 1978. They did have college kids shoveling, but by the time they got to us, we were good.

Working through the night, PWD crews & our contractors removed 800 truck loads of #snow throughout the @CityOfBoston. Pics below from Warren St. in #Roxbury, Cottage St. in #EastBoston, River St. in #HydePark, Cambridge St. in #DowntownBoston, and Hanover St. in the #NorthEnd. pic.twitter.com/yYCkOFmnYy

I really wish they would send

I really wish they would send someone around a few days after the storm and get rid of the big piles of snow between cars. They take forever to melt and make parking a mess in the neighborhoods for a long time after snow storms.

I have a proposal

Let residents do it themselves. In return, they can have the exclusive right to park in the spot for, say, a few weeks or until the snow melts, whichever comes first.