In Roxbury council forum, one candidate calls for steps to increase affordable housing and jobs for local residents; other blasts illegal immigrants, gays and ISD 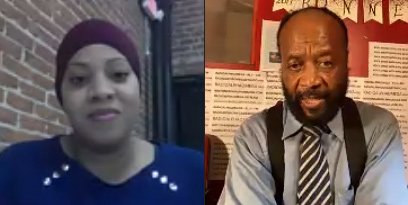 Anderson and Owens in Zoomed forum.

In a forum for District 7 (Roxbury, South End, Back Bay) council candidates tonight, Tania Fernandes Anderson said she would work to increase affordable housing in the district by boosting the minimum number of "affordable" units developers have to provide - from the current 13% to at least 33% - and by making such units actually more affordable by changing the formula the city uses to determine what's affordable to only include the median income in Boston, not richer surrounding communities.

Her opponent, Roy Owens, spent much of his time complaining about "illegal, undocumented immigrants" stealing homes, jobs and pandemic aid from long-time American citizens in the district and said City Hall, in particular, ISD and the BHA, are deliberately trying to drive Blacks out or Roxbury by harassing homeowners and by restricting the number of Section 8 vouchers available to citizens.

In the forum, sponsored by Roxbury Main Streets and the Boston Jobs Coalition, the two candidates in the November final agreed that Mass and Cass is a crisis that needs far more attention than it's getting currently.

Anderson called for more social workers and other resources, including housing, counseling, recovery services and safe-injection sites - but said they need to be spread out, not all concentrated in one small area. She added that as a councilor she would work to get more state resources for the problem as well.

Owens called for a regional commission to solve a problem caused in part by people winding up at Mass and Cass from across the area. But he said government needs to get over the separation-of-church-and-state thing and start giving local churches money to work on the problem. He also said government needs to stop closing roads near churches on Sundays - something he has been complaining about for years, long before anybody had ever heard of Methadone Mile.

Both candidates agreed it's time to make the School Committee elected again.

Anderson said she would return to Chuck Turner's round-table idea, of bringing together people from across the district to seek advice and allyship and even "truth and reconciliation at some level," in a district whee there is still some level of "unspoken segregation." She spoke of bringing together the unique assets of the Back Bay and the unique assets of Roxbury to create a better district.

Owens answered by railing against gentrification, which he said is being brought about by "tens of thousands" of undocumented immigrants. Even the workers at the local Burger Kings and Walgreens no longer look like the citizens who grew up in Roxbury, he said.

He returned to that theme when asked about how to spruce up Nubian Square. "Our vote is being depleted," he said, adding part of the proof is the growing size of "the Caucasian community" in Roxbury.

Anderson responded that she would work to employ local small businesses in the square to provide needed services - including hiring local artists to create projects in the area. "We need to integrate art" with 21st century businesses, she said.

The next question was on increasing employment in the Black community.

Anderson said she would work to ensure local businesses with city contracts are meeting their commitments under city policies for hiring certain numbers of minority and women employees. She added that part of that must also be to work with companies getting city contracts to hire minority candidates to oversee hiring in the first place.

Owens accused the city of limiting employment at local businesses by making it near impossible for them to expand - even as they invite suburban "outsiders and speculators" in to take over the neighborhood. And he accused government of setting aside "millions of dollars" for illegal immigrants even as "people who are already citizens" are being denied jobs.

Wow. This guy really doesn't want to get elected.

This is probably not going to help his cause.

But he said government needs to get over the separation-of-church-and-state thing and start giving local churches money to work on the problem.

Well, first they have to get over the Constitution thing.

Oh please, this is what is

Oh please, this is what is actually in the constitution thing, “Congress shall make no law respecting an establishment of religion.”

Literalists are such a joy

Sure, let's not pretend there aren't 200 years of court rulings on just what that phrase means.

US law is based on both case law and statutory law. This is the whole reason there are courts.

The government already gives churches a TON of money by not having them pay taxes!

Maybe not in Boston

But he sounds like the typical GOP candidate in other parts of the country. This article read like a recap of a 2024 presidential debate. (Minus the section 8 stuff.)

Imagine being the candidate

finished in third place, by a margin of 37 votes. Not quite as close as Julia Mejia's win two years ago, but damn, it must really sting her to watch this clown get a public platform to spew hatred.

Over 900 District 7 ballots cast in the preliminary election had no votes for district city councillor. That’s a big reason that a small but organized voting block was able to put Owens into the top two.

I know that most people who will cast a vote in November and who are paying attention to this race will vote for Tania Fernandes Anderson, but I can’t shake off the fear that even more voters are only interested in the mayoral race and maybe the at large race and they will blank the district race. That Owens possibly has a shot.

I am equally concerned about turnout in the mayoral race, that all the expressed support for Wu is not going to translate into actual votes cast (which is what happened with Campbell and Janey in September). There is a well-funded get-out-the-vote machine backing Essaibi-George.

District 7 voter and quite a fan of Angie. She's quite the leader in our community. I can probably round up more than 37 Angie-supporting neighbors on my social media feed who intended to vote but didn't get around to it. Meanwhile, 99% of this bigot's cult followers made sure to vote. Also, the huge field of pretty awesome candidates with similar (normal) platforms unfortunately helps the singular person running on a delusional assclown platform.

Another reason to use ranked-choice voting

Cambridge has been doing it for about 80 years and it seems to work well. Boston should get on board.

...that RCV was voted down.

That was at the state level

Not sure about Boston, but Somerville residents voted heavily in favor.

“They took our jobs!”

“They took our jobs!”

Imagine having to debate this guy

Sounds like she kept her cool despite her opponent being half off his rocker.

(Adam, typo in her name in the caption.)

The soul of the late Dapper O'neil has been transplanted to Roy Owens. The hate vote in the city was born a couple of hundred years ago with the "No Nothings" who despised Irish and Italian immigrants and if Owens gets elected it will rise again.

He may sound crazy, (and may in fact be a little crazy),

but people can be driven crazy by living through a whirlwind of change, tacitly approved by other more powerful people who who are making huge profits. The blacks in Roxbury are being displaced today as fast as the Jews in Mattapan in the late 60's, and other working class whites in parts of Dorchester soon thereafter.

No, he doesn't have that excuse

He's been spewing hatred for at least 30 years now.

Well I was gonna ask:

How can a person of color be so ignorant and stupid? I mean I get stupid comes in all shapes and sizes, but to be that unaware of the fact that you are doing exactly what others have done (and still are doing) to people of your color AND why you seem to think its acceptable?

"Treat people as you wish to be treated"

From this white dude's point of view, every time I see a black or latino republican I ask my self WHY WHY WHY would you be that way? I get 'being conservative' however, most people in your party would rather see you vanish. How can someone associate with this? (and dont EVEN get me started with Clarence Thomas...)

I just do not understand this and probably never will. It just seems like you are just shooting yourself in the foot.

@cybah thanks for asking that question. I am also white but I am a person with a disability (legally blind). I frequently do not see eye-to-eye with some of my peers within the disability community, even when it comes to things I think are not moving our movement forward. We disagree on policies, approach, tactics etc. Some of that is informed from our upbringing, or how long we have been experiencing our vision loss, or more traditional political beliefs. It certainly is frustrating and at times uncomfortable but I try (not always successfully) to look at it on an individual basis. Cheers

It seems simple to me

Every community has their LGBTQ, and every community has those who hate them. There are no end of causes and excuses, and I'm convinced it will never go away, because every society needs its perverts to hate and revile. Moral panics are a powerful tool of political advancement and social control. They are useful, and they will never go out of style. And, to be honest, the sooner we stop trying to make sense of this or any other kind of stigmatizing, and start understanding how useful it is to people with an agenda, the sooner we'll be able to really deal with it.

A lot of people live through change

A lot of people live through change and aren't "driven crazy" by it (convenient excuse/euphemism for hate).

But he still really ends up being a one-issue candidate

OK, maybe not literally one issue, but basically dude wants Boston to be a fundie theocracy.

His opponents over the years have almost all been Black folks who worry about gentrification and support schools and social services and strong communities and whatnot. Except the rest manage to do so in a way that affirms LGBTQ folks and non-Christians.

Well at least he answered the

Well at least he answered the questions.

Are those Dr. Bronner’s labels on the wall behind him?

Print is too large, and all goes the same direction. :-)

How a former Saudi official got enough money to buy eight luxury condos in Boston to remain a national-security secret
Green Line trolley derails between Copley and Hynes; no injuries, at least
Orange Line seat-hog rage at Back Bay sends one to the hospital, shuts service
Lego bricks and mortar: Company to move US headquarters to Boston
Back Bay medical assistant charged with second patient sexual attack
Medical assistant at Back Bay health center charged with raping patient in exam room