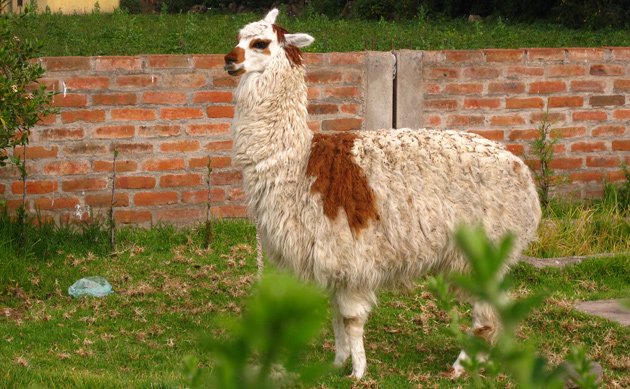 An alpaca, although one in Peru, not Middlesex County.

The state Department of Public Health yesterday announced the state's first animal case of West Nile Virus: In an alpaca, somewhere in sprawling Middlesex County, a week after four human cases had been confirmed in the state.

With both people and animals now getting infected with the mosquito-borne virus, in a summer that has seen higher-than-average amounts of mosquito-pool-generating rain, the state has raised its risk level for the virus from moderate to high in 27 communities: Boston, Chelsea, Revere, and Winthrop; Lynnfield and Saugus in Essex County; and Arlington, Bedford, Belmont, Burlington, Cambridge, Everett, Lexington, Lincoln, Malden, Medford, Melrose, Newton, Reading, Somerville, Stoneham, Wakefield, Waltham, Watertown, Winchester and Woburn in Middlesex County; Brookline in Norfolk County.

The virus typically produces mild flu-like symptoms in otherwise healthy younger people, but can prove more severe in people with impaired immune systems or who are over 50, the state says.

While we advise everyone to take steps to avoid mosquito bites, this is especially important if you are over the age of 50 or have an immune compromising condition. It is also important to know that as overnight temperatures get cooler, mosquito activity right around dusk and dawn may be more intense.

Peru, MA could just as easily have alpacas yanno. /pedantry

...not with THAT neat and tidy wall.

Take a look at the photographer's online albums

Must have been Peru Vermont

Must have been Peru Vermont

Too much water = skeeters

Too many skeeters = arbovirus outbreaks.

WNV can be bad or just annoying, but EEE is a serious scourge.

Here's some info on beating the skeeters: https://www.mass.gov/info-details/mosquito-borne-disease-prevention

There is an alpaca farm in Sherborn-

Exact address seems unnecessary but it's in the northwest quadrant of the town, somewhere between Route 27 and the bottom of Speen Street. I don't know if it's the only alpaca farm in Middlesex County, or if some member of the landed gentry has some alpacas out of sight on their ancestral estate in Weston or Concord or Carlisle, but it's certainly the only alpaca farm I've come across in Middlesex County.

There are several alpacas on

There are several alpacas on a property right next to the Whipple Hill conservation area on the Arlington-Lexington line (on Summer St.). Used to see them all the time during my morning commute.

Time was, you could rent an apartment, then grab some donuts for the celebratory road trip in your Chevy Vega
BPD captain who had been on paid leave for more than two years cleared of most charges
Rats running amok through Boston; residents, councilors demand action
No matter where on earth they roam, people will know Boston is their home
Court to Quincy: Boston can rebuild its bridge to Long Island
All diseases skillfully treated