The Pond: A drama in three acts 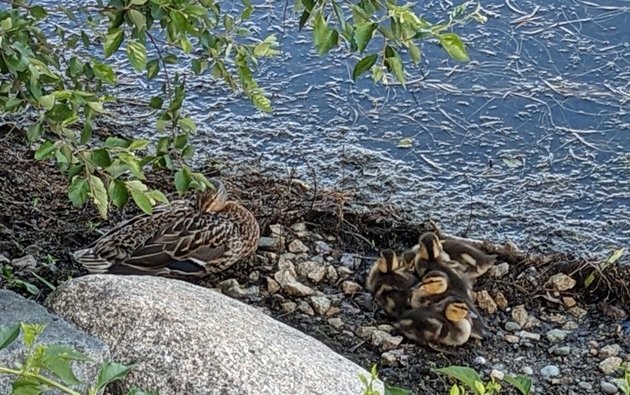 The mama duck and her seven ducklings had settled in for a snooze late yesterday afternoon among the mud and rocks along the Perkins Street side of Jamaica Pond, just up from that outlet tunnel. As the ducklings huddled in a big fuzzball, mother burrowed into her own feathers - but with one eye still on the water.

Then a heron landed maybe 8 or 9 feet away. At first, it stood there, seeming to eye the ducklings.

Mama quickly woke up and began keeping both eyes on the carnivore. The heron did its Groucho Marx thing and began walking in the general direction of the ducks. Slowly, it came closer and closer. Mama seemed to be getting really worried. The beast with the sharp, stabbing beak came closer still ...

And then it kept right on walking, past the nestled ducklings.

Phew, safe, right? No, because from the direction where the heron was heading, a King Jerk male duck now approached, angrily quacking at the mother and her brood and pointing his stupid beak right at them. This time, mama got her babies into the water and tried to get them away from Mr. Crankypants, who kept chasing them.

Finally, the family was far enough away that the lug stopped chasing them. And then he kept on going! So the mother and babies weren't in his preferred resting spot or anything, they just offended his sensibilities. Jerk.

Not long after, the mother led the ducklings on a long trek to the other side of the pond, near the turtle log. Maybe she'd find some respite there.

These Drakes Rights activists are the worst.

It’s hard out here for a Mama

It’s hard out here for a Mama Duck! Quack, quack!

There were two herons at the pond yesterday

The one that seemed at first to be heading towards the ducklings and another one that was perched on the log on the Pinebank side that would normally be full of turtles sunning themselves, but no way were they going to stay there with Beak o' Death right there.

The two almost came beak to beak not long after the duckling incident. But herons apparently are solitary creatures, so the one that had been on the log took off.

The Revolution Will Not Be Televised

Heron--as in, "hey, there's a heron my egg salad sandwich."

I'm just going to throw this out there

Maybe the "crankypants" duck is the father, and he felt the area where the ducklings were was unsafe so he was trying to usher them to safety.

Conversely, he took long enough to get there to "protect' the ducklings.

for this heartwarming tale. Nature is tough and fascinating.