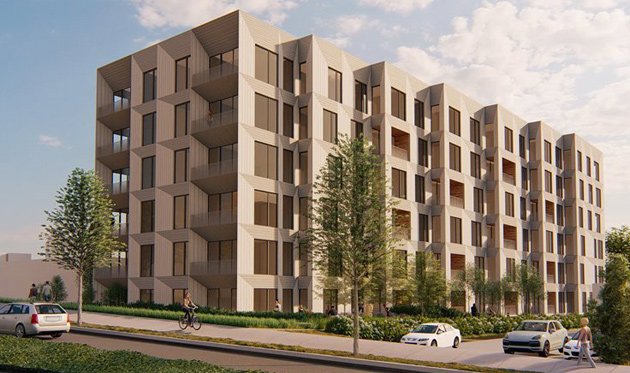 Rendering of building that gives most residents a view of the Charles by Howeler and Yoon.

The Zoning Board of Appeal today approved a six-story, 102-unit apartment building off Soldiers Field Road near Leo Birmingham Parkway that was designed like a "prow" to give most of the residents views of the nearby Charles River.

Some 17 of the units will be rented as affordable, up from the roughly 13 developer Steve Ballas of Chestnut Hill would have normally been required to set aside. People who rent these apartments can make no more than 50% to 90% of the Boston area median income.

Ballas's attorney, Joe Hanley, emphasized that this was not one of those "compact" proposals with tiny unit, but a building with "very vast" apartments, such as the roughly 55 one-bedroom units with an average size of 897 square feet.

The building will have room for a small cafe as well as 62 parking spaces and a Bluebikes station.

The only person to object to the proposal was an attorney for a neighboring apartment/condo project under development, in one of the many fast-growing sections of Brighton, who said there was no real hardship that required variances for the building's height and size, since Ballas's desire to maximize profits is not legally a hardship.

Board Chairwoman Christine Araujo, however, silenced him, saying that developers who themselves had earlier won variances from the board were in no position to complain about another developer getting a variance. She then called for a vote, and the board voted in favor unanimously.

For those others who were unable to imagine how the picture above could look like a "prow," the building is shaped like a hydraulic service plug.

But seriously: a stepped, truncated cone (with the narrow end facing the river).

The floor plans make it a bit clearer

The floors start out wide and narrow as they get closer to the river. I think there's also a specific name for a design that includes those windows that stick out like that to increase people's views of a particular area, but darned if I can remember it (there's one building on Washington Street in Downtown Crossing that was built like that, another in the Seaport facing downtown).

The Sonesta in Cambridge.. the older highrise is built in this manner so each room has a river view. 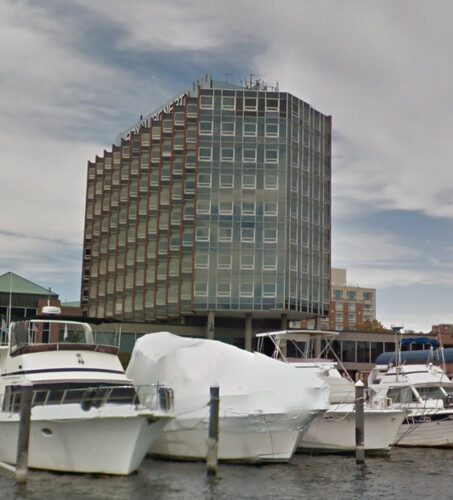 Side note, I was watching a 1984 episode of "Press Your Luck" (Game show). One of the prizes was a "Boston Getaway", and the sponsor hotel was the... Royal Sonesta. (FWIW, Airline was Eastern Airlines)

My educated guess says that when the second tower opened (the newer tower) in 1984, they bought ad space, in this case a game show, to promote the new hotel's tower.

what a world it would be if the ZBA actually looked at hardship? We might have updated zoning to address the issues all of these variances are getting around.

Instead, they give out variances left and right and a lot of zoning attorneys make big bucks.

17 more affordable units than were on that site before. Is the glass never half full for you people?

Time to move the donuts across Cleveland Circle
No Freudian slip: Board approves new apartment building called the Sigmund off Soldiers Field Road in Brighton
New sign, who dis?
Oak Square gets some time in the roaster pan after power goes out
Some passengers on a Framingham-bound train forced a door open to escape after nearly two hours stuck with no AC in the sun in Brighton
Brighton food-truck operator charged with pandemic-relief fraud; used federal grants aimed at keeping his business afloat to play the stock market, feds say