The Filene's Hole of Jamaica Plain will remain unfinished even longer after board declines to let developer add a floor, more apartments to unfinished building 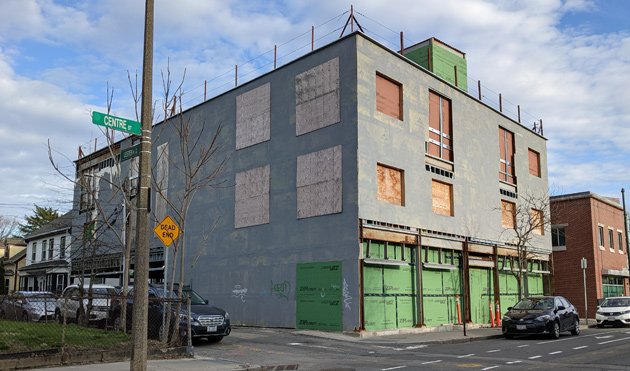 The Zoning Board of Appeal today rejected a developer's request to add another floor and double the number of apartments at 632-638 Centre St. in Jamaica Plain, which had been a hole in the ground for years before a developer finally got permission to build a three-story building, then stopped to try to get permission to finish the thing off as a four-story building.

In February, the BPDA board approved Andrew Zuroff's proposal to add a floor and increase the number of apartments from 9 to 18, but the zoning board today sided with residents who said that approval would be rewarding somebody for something they shouldn't have done.

Joshua Brandt, who lives on Greenview Avenue - the dead end on one side of the building - told the board he is "pro-density and pro-development," but urged the board to reject the proposal because of what he said was an abuse of process that has left Centre Street with a blight for years now.

"To reward a tactic of building something you don't have permits for by ultimately granting those permits is really dangerous precedent for this board to set," he said. "This is a process the [board] simply cannot reward."

Board Chairwoman Christine Araujo said the vote means that Zuroff can still finish the building off with three stories and nine units, for which he has a building permit.

What was the abuse?

What was the abuse? Did they start building a 4 story building then try to get permits?

Hard to say, but they did

Hard to say, but they did build all three floors with a steel frame. At three floors, you could easily, and for less money, build from wood without affecting the final building. A lot of the four and five story buildings being built today are steel for the first floor only and then 3 or 4 floors of wood above. That the first floors were steel does suggest that this was always their plan.

Planned For Four Stories in March 2015

This was going to be a four-story building back in 2015. Nothing is fishy here. The steel frame was necessary to build a four story building. He was hoping to get it up to four stories well over 5 years ago, but the NIMBYs, excuse me, neighbors kept knocking it down. It's been a 5+ year battle of four to three to four to now zero story building. The only thing holding it back are the neighbors. It's outrageous. Lots of projects change because they are not financially feasible, let alone the costs of a 5-year permitting and unsupportive community process.

This project had a building permit for nine units on 3 floors.

The developer built a structure for 18 units on 4 floors and got stalled as a result causing this terrible blight.

Imagine if every developer started building whatever they wanted - regardless of what was permitted. It would be an absolute nightmare.

There is really no advantage

There is really no advantage to the developer to do this. First of all time is money for the land owner. Second, you are never guaranteed to get the addition permit, so you end up throwing money away on engineering and architectural work for a project you can't build. Third, construction bids don't last forever and generally go up, so the sooner you can get things done, generally speaking, the cheaper it is. Last, "the developer built a structure for 18 units" really makes no sense. It's legal to build all-wood structures as tall as 6 stories around here. The fact that this structure was made of steel is in no way an indication of the developer "intending to make it 4 stories."

Zuroff had abutters meetings in Jan/Feb 2015 because he planned to ask for Zoning relief to build a "4-story, mixed use building with 14 residential units (1 and 2 bedrooms ranging in size from 532 square feet to 824 square feet).". There were many concerns raised by neighbors at the meetings. We were told by his legal reps that he would come back. Many of us assumed that this would be a normal community process. In March 2015, Zuroff's then attorney emailed those who had attended the meetings that Mr. Zuroff had decided not to pursue the appeal. We were subsequently informed that he planned to build a 3-story building as of right. We reached out in summer 2015 to communicate that we respect his right to develop his property and that we would like to work cooperatively with him as neighbors – however, Mr. Zuroff declined (via his lawyer) to discuss anything with us then and did not communicate anything to neighbors about his plans, has not communicated or coordinated when Lester Place adn Greenview Ave have been blocked for demolition/construction, etc.

I agree that there is no advantage for a developer to do this, start the building and leave it as a hole in the ground and blight on the nieghborhood, but that has not stopped this developer from doing precisely that. It doesn't make sense on any level.

This is why I think it only

This is why I think it only makes sense to focus on what kind of building would most benefit the neighborhood, and not on punishing the developer for not obeying the process. "The process" such as it is, is broken. It should never be easier to build a 9 unit, zero-affordability project, and yet it is. Now that this developer has turned around and decided to build a better project, they should be rewarded for seeing the light, not pushed back toward the bad project so that we can all feel better about seeing them punished.

Love to hear your opinion on this, Adam. You go to a lot of these meetings. Are you surprised by this ruling? I don't hear of them rejecting things often so this surprised me.

Yep, unusual at the zoning board

But not because of the way the board voted but because you don't usually see developers start work on a project with a permit for X size, then stop everything in the middle to ask for a larger size.

Mid-project changes do happen a bit more frequently with larger projects before the BPDA - the Winthrop Square tower is one example - but typically it's to reduce the size of a project or change the uses (like in that case, from condos to apartments).

Well, it's easier to kick

Well, it's easier to kick down and kiss up. Local pols know this well.

Not for nothing, but the site

Not for nothing, but the site isn't even secure. I was curious as a passerby, so I walked right up to the project. No secured fence at all. I walked right inside the building. The homeless must love it.

I'm confused. This article from February says this project was approved.

It was approved by the BPDA but ...

It also needed approval by the Zoning Board of Appeal.

Four Stories Is Not That Tall

This almost never happens. When an Article 80 project is approved by the BPDA, it is then primed for approval by the ZBA.

Was any of this a case of NIMBY'ism from the neighbors? We don't know the Applicants' financials. Maybe 9 units + ground floor commercial didn't pencil out several years ago in the height of the construction market being as expensive as it was (and still is). We need more housing. That we know. Demand is still outstripping supply. Height in the commercial part of a neighborhood seems most appropriate. It was only 4 stories being proposed. 18 units would have gotten us some deed-restricted affordable units but not anymore. I understand that we don't want to set a precedent going forward, but every project and its circumstances are unique. What gives here?

The developer is an asshole

The developer is an asshole who hasn't given a shit about the neighborhood this entire process. Leaving a giant pit in the ground for years, illegally blocking off the sidewalk for a construction project that isn't happening, trash, noise, building the structure so it's ready to go to slap a 4th floor on it despite knowing he only was approved for 3 -- if the guy sold the building and permits to somebody else and they brought up the 4th floor question it would probably be different. But telling somebody who's been fucking up your neighborhood for years to go screw is less NIMBYism and more about not rewarding shitty behavior.

And yet, who are we really

The developer, who has to

The developer, who has to walk away with less money

So, great, the developer gets

So, great, the developer gets a few less dollars this one time and the rest of us have to deal with having half as much housing and less valuable foot traffic on an important commercial strip for decades to come.

Yes, there are some NIMBY's

Yes, there are some NIMBY's that block things. There are also plenty NEWBIE's that move into a place & then want to change everything about it whilst blaming the NIMBY's. It's called balance.

How about the people that own the houses behind that building now? Not so great for them.

I am all for building and affordable housing...but man what I wouldn't have to have Cousin's back:)

I don't know about you, but I

Give the builder a deadline. Let’s speed this process up! That eye sore, boarded up, half built thing seems like it has been there forever.

City should declare it blight

City should declare it blight and start the process of eminent domain. Never understood why Menino didn't do that with the original Filenes hole after Vornado openly said their strategy was to leave it unfinished to extract more concessions from the city.

If you think this permitting

If you think this permitting process is taking a long time, wait till you see how long a property owner can tie the city up in court over an eminent domain case...

Today's duck lesson: Redhead ducks are not ruddy ducks
MBTA proposes new garage for battery-powered buses at Arborway yard
Sunset runs on Dunkin'
Curley School's first day back to end with a Covid-19 vaccination clinic
Jamaica Plain man on probation for child-sex crimes charged with getting a girl to pose naked for him online
State to set up temporary housing for Mass/Cass homeless at Shattuck Hospital campus in Franklin Park