Why are there so many Dunkin’ Donuts in Boston? 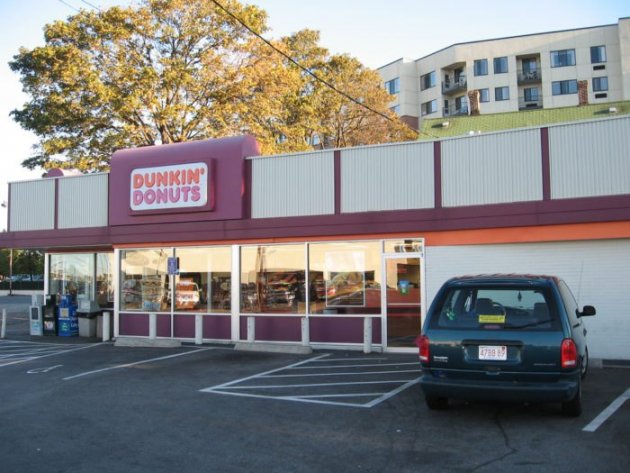 I want to know why are there so many Dunkin’ Donuts in Boston?

Neighborhoods:
Boston
Dunkin' Donuts
Ad:
Like the job UHub is doing? Consider a contribution. Thanks!

Are you from here? Is this a trick question?

So, how many DDs are there in Boston?

to coffee and sugar

It was started in Quincy, MA.

It was started in Quincy, MA. The original is on the Southern Artery there,

They started in Massachusetts. The first is in Quincy

Dunkin has a picture of the first location here:

And it is still operation

And it is still operation today.

I think the OP knows more than they let on

The picture in their post is, in fact, that first location (though not with its current signage.)

You are right! I did not see

You are right! I did not see that.

... that it is now owned by a skeevy operation headquartered in Sandy Springs, Georgia.

about lobbying to kill the $15 minimum wage provision in the most recent COVID rescue package, if I'm not mistaken.

When did we allow...

This isn't the UHub News side of things. This is a side project of Adam's called "Boston Answers" where anyone can ask a question.

I think adam hits a checkbox somewhere so it appears on the main page.

I know with some user articles he has to do that.

Donuts were artificially introduced to the New England habitat sometime in the 1920's as a means of maintaining the burgeoning croissant population. But, they proved to be an invasive species in themselves and rapidly spread across the region causing obesity and dropped Rs. Ecological disaster would have been imminent had a local innovator named Duncan not realized that donuts, once dunked, could no longer reproduce. Duncan went on to testify to the Massachusetts Senate, and demanded that, as a public health measure, at least one facility for dunking donuts should be provided in the commercial heart of every neighborhood. The rest is history.

I thought it was all a German plot to win World War II by making Americans too fat to fight.

There's a lot of people in Boston who will spend money at Dunkin', so there's a bunch of Dunkin' in Boston to accept their money. Supply/Demand/yadda yadda.

Two factors: franchising and its origin

As others say (and you seem to know), it started in Quincy. But the other big reason there are so many in the Boston area is franchising. The modern franchise restaurant/service model basically started in Quincy as well (with Howard Johnson's). By jumping into franchising in the 50s, Dunkin Donuts could put their logo on donut shops anywhere someone wanted to build one. Of course, most people familiar with the name are going to be local to where the original stores were located. And moving about the country to live and work is a more modern occurrence as well.

However, Boston isn't even where the greatest number of Dunkin Donuts exist in a city. New York is by far the winner there and Chicago is also up there.

While both points are great.. but remember what happened in the mid 1990s to Dunkin Donuts....

"The Commissary" (aka streamlining)

Prior to the mid 1990s, most Dunkin Donuts stores made the donuts "in store" (in the back). Sometimes they *might* share a kitchen with a smaller location (think gas station).

In the Mid 1990s, Allied Lyons, then owner of Dunkin Donuts, championed the commissary concept. What this means is there was now a "Donut Factory" somewhere that would make donuts and vans would deliver them to stores.

Once this happened, Franchises EXPLODED. Because you no longer needed to have facilities either in or nearby to make donuts. They could be trucked in from other locations. One commissary for a franchise could serve up to 20 stores or more if done right. So much cost savings, considering that a kitchen could run above 500k (in 1992 dollars).

However this caused Dunkin to reduce the number of kinds of donuts (i.e. like the actual Dunkin Donut doughnut), Fancies (i.e. Bear Claw), Bagels, and Muffins. And reduce quality across stores. (Sorry, its gone down hill see below)

The other thing that happened was streamlining their business as a whole. Away went donut + sandwiches that had low ROI & high overhead. (remember Chicken Salad?) And to automate more of the process to make things & have cost control. (i.e. Cream dispensers, Coffee Makers for Iced Coffee specifically) Plus many of these new automation machines were designed & manufactured for Dunkin Donuts. (vs buying off-shelf items)

Franchisers could save on costs & look at smaller locations that could do full service. (again think Gas stations, T stations, etc).

Effectively make it easier to open stores, faster, with turn-key solutions vs a hodge podge of stuff prior.

While alot of people cried when Allied Lyons (the parent of Baskin Robbins) bought Dunkin Donuts in 1990. What Allied did was streamline their operation. IMHO, I don't think Dunkin would have survived if it wasn't. And it worked... Allied grew the chain to 2500 locations by 1998.

And they keep streamlining. Until recently you could get tuna on a bagel and that kinda worked as real food when nothing else was around.

As much as people like to complain, the Commissary model just cemented the thing people like most about Dunkins: Consistency. A large coffee and egg and cheese looks and tastes exactly the same in Downtown Boston as in rural NH.

People care a lot more about predictability than they do quality.

Dunkin Donuts now is one hell of a tight ship. I look behind the counter and see stuff that replaced much manual work I used to do. They've take a page out of Ray Kroc's automation book. They also have become pretty innovative with what equipment you have in store, long gone are the standard microwave ovens, and in come small convection ovens that are multi purpose.

And yeah consistency was an issue.. I mean some dunks in the 80s were more of a diner than they were a place to get coffee and donuts. And it varied from place to place. The original dunks in my town (in the early 80s) served a full breakfast.

But the loss (for me) is freshness and the donuts themselves have gotten smaller. I mean its the same donut for the most part but.. meh.

why so many dunks?

I only go for the atmosphere.

There is demand for Dunkin Donuts, meaning there a love of the chain.

At Back Bay Station, there are 2 Dunkin Donuts locations. You can be in line at one and see the other one, 50 feet away. If you are put off by those two, you can leave the station on Dartmouth Street, take a right, walk to the end of the block, take another right, and a half block down there is another Dunkin Donuts. If those three don't do it for you, you'll have to go all the way over to Boylston Street, walking 3 and a half whole blocks, to get to the next one. At least in the pre pandemic days, all of them did good business.

Its really shown how many we *really* need

So many locations are closed, long term.

But yeah pre pandemic... like Duane Reade in NYC, you can spit in Boston and probably hit a Dunkin Donuts.

My fav are locations on either side of the roadway like in Everett on the parkway. One for the inbound traffic, one for the outbound traffic.

The Dunks between Clarendon

The Dunks between Clarendon and Darmouth on Stuart Street is gone. They are building where it was.

Where will I go now?

Which begs the next question...

There are two in Lynn basically across the street from each other on I think Boston Street or Western Ave near BayRidge Hospital.

The two in Back Bay.

The two in North Station.

And Starbucks is awful.

And yet they have closed *twice* in Davis Square

Once because the building they were in fell apart. Then again (attached to bfresh grocery store) when the pandemic began. A few months later, their signs came down and all of the fixtures were removed. It's still empty today.

We're also the only place I know of where McDonald's has closed twice.

Don't even get me started

I miss my ladies at the Davis Dunks. I loathe walking to Powderhouse or Porter Square.

And McD.. 3 if you include the one in Porter (was the same Franchiser, as the staff moved to the Davis one after it closed)

About 13 months ago I was there with the little one, who wanted a donut. That DD was kind of hidden.

He wanted a donut with sprinkles

And specifically asked for Dunkin Donuts. Interestingly, I turned around once I hit the Rosebud.

Overall, it was a good time at Davis Square. We did a bit of the path to Alewife.

Another DD sort of near Davis Square

Go down the bikepath towards Alewife, but turn right onto Mass. Ave. There's a DD on the left, a block towards Arlington from the bike path crossing.

Why do so many of the posts

about bodies dropping get no comments?

I always assumed they were installed as navigation

If we light the flame

Of the Big D (used to be both of them) - are we sending the signal down the line that we're being invaded?

I actually grew up kind of liking Dunks, until I moved here

We'd get them on occasion home in NJ, and a Boston cream donut was a treat for ~8 year old me. The bagels may as well have not existed, but it had it's place on Sunday mornings. Then I finally moved here and became a coffee drinker, and saw what they did to "coffee" which by that I mean made it a vehicle for diabetes more than caffeine.

The amount of times I have had to send back the coffee because it was half cream and sugar blew my mind. I eventually learned the lingo "1 milk, no sugar" but the default option could use a lot of work.

I only mention DC because I've been to the one near my work's DC office to notice the differences. Even in New Hampshire, the lingo is different. I just now specific it "Extra Cream, 2 Sugars"

Also, donuts were better in DC. I can't explain it, but they were bigger, fresher, and just better.

When I was a little kid, the donuts were baked fresh in

every store and used different batters for different styles (crullers vs. plain dunkin', etc.). They were really good. As the chain got bigger and more corporate, it focused on caffeine delivery and cut back to central-location donut baking with a single batter, with predictably unfresh, pitiful results. The donuts are pretty much unspeakable now.

You might as well ask why there are so many stars in the sky?