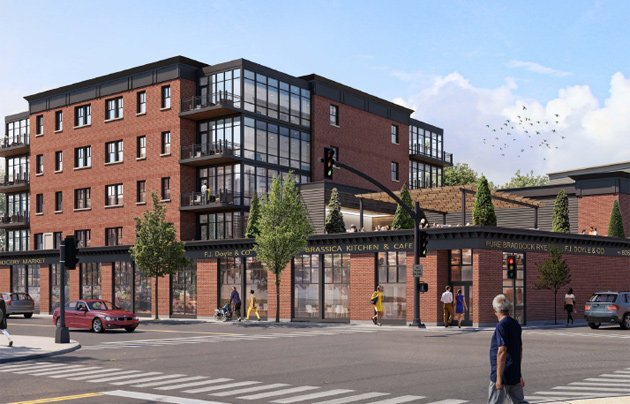 Rendering with birds by Scales Architecture.

Watermark Development has filed its plans with the BPDA to re-open a renovated Doyle's Cafe with rooftop dining, condos and a market on Washington Street in Jamaica Plain.

Watermark, which has focused on Jamaica Plain development, says the 23 condos it is proposing - 16 in a four stories above the restaurant and market and 7 in a separate building kitty-corner from the site on Williams Street - would help pay for the roughly $2 million in work required to modernize the 140-year-old Doyle's.

The upgraded restaurant would be run by Brassica Kitchen and Café, which now operates down the street in Forest Hills, according to Watermark, whose principals have a personal connection to the old Doyle's - founder Jeffrey Goodman , including son Lee, who is now a principal of the company, to Doyle's all the time.

Plans call for restoration of Doyle's original walnut bar and for the creation of a new, larger Kennedy Room for large parties and political meetings of the sort Doyle's was famous for. Watermark applied for city Community Preservation Act funds for the work, but did not receive a grant.

To build the market and new condos, Watermark's plans call for razing the house that now sits next to Doyle's, at Washington and Gartland streets. Three of the units will be marketed as affordable.

Watermark says it will be able to construct the market and condos without disturbing Stony Brook, which now flows in a conduit under part of the existing Doyle's.

I had no idea there were plans to reopen Doyle’s. I thought it was dead and gone forever. It would never be the same but it’s still a good idea.

I'm all for Doyle's reopening, but who'd want their windows to overlook a bar/restaurant terrace?

I hope all that glass will be triple-glazed and totally soundproofed. And even then. . . .

But it's okay! This will be

You can call it Doyle's, but it won't be Doyle's

Brassica has much better food

Brassica has much better food, service, cocktails and wine selection than Doyle’s so you are right. It will probably be much improved over the old Doyle’s.

Page 32, the "office" is set up with some interesting furniture...

That's a perfectly fine place to sit and work, especially if you're Sean Connery.

I usually hate the new buildings being built in Boston but this looks great! The style actually matches the neighborhood and resembles the refurbished brewery bldgs by Jackson/Bromley area. The windows may be a bit much (at least from a privacy perspective) but it looks awesome.

Will it look like that? Look at their rendering of Washington Street.

Soooo they just take the old name for use by the totally new and antithetical establishment that will cater to the new folks who move in above it. Sort of like trying to revive the "West End" name for a neighborhood that was destroyed by exactly the same types of tools who are doing this crap.

Nope. Give it a new name. Brand it as your own. You can't shit on the past and then try and get all nostalgic about it. #crapitechture

Shit on the past?

What, when the family that owned the bar and the building cashed out? But sure, the yuppies made him do it.

The staff were pretty damn rude and everything the kitchen served up came from a can or the the freezer.

I used to go with a sports league and despite packing the place 3 nights out of the week and everyone tipping well and being super kind, the staff seemed barely willing to hide how much they despised us.

Then don't call it Doyles. Doyles is done, it wasn't a particularly great place by any measure but it had a clear identity and a rooftop bar stuck onto more condos that the working class can't afford is absolutely not that identity. And if you can't see what's wrong with that you need to dig your head out of the ground.

This is a scary prospect for the future of Boston dining scene, are we going to have a bunch of "revivals" of closed landmark locations with completely transformed concepts opened under the stewardship of land developers? Are we going to have Eastern Standard reopen as a shell for yet another damn Smoke Shop? Have Legal Seafoods reopen Island Creek? I'd love these classic restaurants to have remained open but dredging up their legacy as some kind of freakish zombie is so disrespectful to the cultural landscape of the city I can barely process it.

So yeah, "cashing out" is fine and I wish nothing but the best for the former owners of Doyles and so many other shuttered establishments. But this isn't about that, this is about something much worse.

If people want to cash out, fine. Or if they want to stop running a bar after doing it forever, fine. But the place had a reputation. Old, townie, all the political crap on the walls...it was a landmark of a particular sort. The owners cashed out and moved on, their prerogative.

Tearing the building down and then rebuilding something but putting the old name on it although there is nothing there of the original establishment is just lame. We're destroying the old fabric of the city and if that makes people happy because there will be another trendy new restaurant there, fine. But don't try to cash in on the history that's being plowed under. Go ahead and create the new fabric of the city. I just hope its not a polyester weave.

People get way to hung up on the past here. Doyle's was iconic and it's gone. Maybe the new Doyle's regains what was lost or maybe it doesn't but keeping the name doesn't diminish what it used to be.

This kind of reminds me of all this stupidity about someone else getting Varitek's non-retired number. Who cares? He wasn't Pedro, he wasn't Yaz - he was a very good player and it's time to move on.

This headline is misleading. Doyle's will not reopen, but a new restaurant will take over the space that was formerly Doyle's (Brassica, currently across from Forest Hills Station). Stating that Doyle's is reopening is manipulative on the part of the developer who is pulling on the heartstrings of those of us that dearly miss the real Doyle's. I encourage the author to clarify the title of the article.

Nobody ever walks in the same river twice

Restaurants change their ownership sometimes. They change their menu, they change their building, they can change basically anything about them, and it's just a matter of convention whether we consider it the same restaurant. I suppose "officially" one distinction would be whether they acquired the name rights from the old owners of if they can just call it Doyle's because that name is in the public domain. But it's all pretty fuzzy. Doyle's in 2019 wan't the same as Doyle's in 1882.

But what about the subterranean river running straight through Doyle's?

Yup. Cornwalls is a good example of that. Same owner moves the bar across the street and it just isn't the same bar....literally.

We used to have a name for that place

Today's duck lesson: Redhead ducks are not ruddy ducks
MBTA proposes new garage for battery-powered buses at Arborway yard
Sunset runs on Dunkin'
Curley School's first day back to end with a Covid-19 vaccination clinic
Jamaica Plain man on probation for child-sex crimes charged with getting a girl to pose naked for him online
State to set up temporary housing for Mass/Cass homeless at Shattuck Hospital campus in Franklin Park