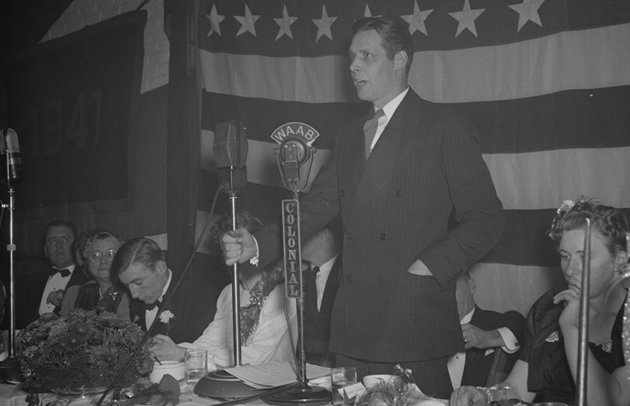 Maurice Tobin at banquet for BC quarterback Chuckin' Charlie O'Rourke.

Assuming Marty Walsh is confirmed as Secretary of Labor, he'll join Maurice Tobin on the exclusive list of Boston mayors to serve in that post.

Harry Truman picked Tobin, who had actively campaigned for him, as his new labor secretary after the 1948 election, although by then Tobin was no longer mayor. Tobin had won election as governor in 1944, despite his connection to the Cocoanut Grove disaster (he'd told the fire department to lay off his good buddy who owned the place) - then lost a re-election bid in 1946 to his Republican lieutenant governor, in an era when governors had to run every two years and the lieutenant governor could belong to another party.

Tobin, a Mission Hill native who had served as mayor between 1938 and 1944, was noted as labor secretary for winning an increase in the federal minimum wage - to 75 cents an hour. But Tobin, like Walsh a strong union advocate, failed to win elimination of the Taft-Hartley Act, which restricted union activities during strikes - and which required union officials to sign affidavits that they were not Communists.

In 1951, Tobin publicly attacked Sen. Joseph McCarthy for his witch-hunt campaign against alleged Communists in government.

Tobin left office in January, 1953, after Eisenhower's victory in the 1952 election. He died just six months later, at 52.

In 1967, the Mystic River Bridge was renamed for him. He's also remembered in the name of the Tobin K-8 School and the Tobin Community Center on Mission Hill.

Photo from the BPL's Richard Merrill collection. Posted under this Community Commons license.

Gee, I Wonder If Walsh Will Get A Bridge After Him?

However, I can't think of anywhere in the City a bridge is needed. Nope, nowhere.

We need a bridge there.

May I Have Your Address?

I need to mail you some obvious pills.

It’s one of 15 departments, and there’s lots of big city mayors other than in Boston (and state governors too) who might realistically get these jobs.

Why shouldn't more labor secretaries be from Boston?

I mean, on merit, sure

But mathematically speaking, two for US history for one of 15 jobs from one city of less than a million doesn’t feel like punching beneath weight.

Boston tends to overrate itself

There was a time when it was one of the larger metros in the US, but Boston proper is pretty tiny now compared to the largest cities in the country.

Some people haven't noticed that slide.

I mean, Lord's sakes, Boston is now only the 11th largest metro area in the country, booted out of the top 10 by Phoenix. But we punch above our weight class.

Phoenix has had such a huge influence on our country, and sent such a large number of historic figures to serve in the national government. I believe the number may even reach double digits! Perhaps it's the lovely climate.

they have outdoor restaurants that can be air conditioned just by throwing water on the wall. We don't have that in Boston. I blame Paul Revere.

Fewer Departments back then, too

There was no HHS, HUD, Homeland Security, Energy or Transportation when Tobin served.

The Dept of Labor has only been around for 108 years, there have been 27 Secretaries in that time. 2 out of 27 seems like good odds.

Have you noticed that in all

Have you noticed that in all the postings referring to Mayor Walsh as possible Secretary of Labor, no-one ever lists his accomplishments in the area of labor relations that would bolster his nomination.

No members of the firefighters union have ever spit on him

In Boston, that's something.

But you do realize he's a former union president, going to work for an administration headed by a man who professes to care about the labor movement, right?

Boston Globe ending its campaign to cover front yards, stoops with ad circulars
It's come to this, even in Boston
Longtime ABCD head retiring
When we say Boston (a poem)
When Mike Mulligan and his steam shovel came to town
State report blasts BPS day before state board could vote to take over Boston schools