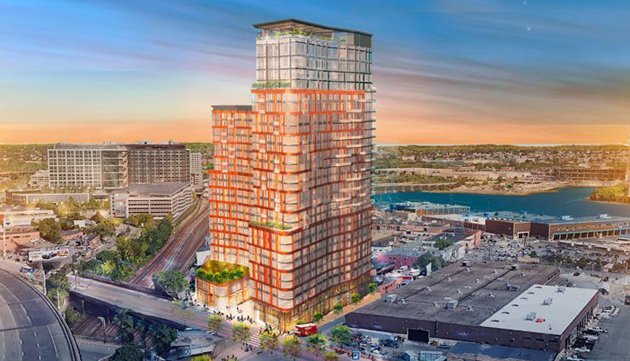 A developer has proposed replacing a pair of ramshackle houses on Mystic Avenue at the Somerville line with a 29-story, 695-unit residential building with a European-style "paseo" market and restaurant hall.

The building, at Mystic Avenue and Dorrance Street, would be 334 feet tall, compared to the 283-foot height of the Bunker Hill Monument and the hill it sits on.

However, through his attorney, developer Scott D. Brown told the BPDA today that the two Mystic Avenue parcels he hopes to use are the best possible place to put up a tower in the Town: As far away from the Bunker Hill Monument as you can get, why, the building would be right on the Somerville line. Also, it's surrounded by "massive infrastructure 'moats' " in the form of the I-93 deck and the Orange Line/commuter rail tracks that will minimize the building's impact on nearby residential areas.

And yet, the new tower will bring numerous improvements to the area just by existing, the "letter of intent" continues: As the tallest structure around, the tower will create a new "striking, elegant" landmark announcing to people coming from the north that they have made it to Boston. Also, the building's brightly lit lobby will face the Sullivan Square T station and "cast light into the nighttime gloom to enhance a sense of passenger safety at this presently isolated multi-modal transit station."

In addition to the Euro-hall, Brown is also proposing dedicated work-from-home suites, a fitness center with "both indoor and outdoor exercise experiences" and "world-class" resident lounges that will feature both panoramic views of the surrounding cityscape and smokestacks as well as "direct access to outdoor recreation and a pool deck."

The building would have 240 parking spaces in total for residents and employees and customers of the restaurants and other businesses in the Euro-hall.

The letter, on behalf of Brown's Fulcrum Global Investors, signals he will shortly file detailed plans for the proposed building, which will start a period of review and public meetings and hearings by the BPDA.

Such plans for such a large project typically include a detailed traffic analysis - potentially critical for the current overloaded traffic vortex that is Sullivan Square, although the letter suggests many residents will take advantage of the possibly less gloomy Sullivan Square station, with its subway platforms and numerous bus lines to destinations that include the Longwood Medical Area and Nubian Square.

One Mystic filings and calendar.

Saw this and thought, wowww. 334 feet tall. And the developer i never heard of. I hope they're prepared for 2 years of hand holding.

Would like it more if it was proposed for the other side of Route 99 next to the highway.

Don't judge until you see the trite of their jive.

The pavement there is a mess

The area between 99 and 93 is a disaster. Too many roads, none in straight lines, surrounding disjoint parking lots.

I'm not arguing against parking near a transit hub -- but the whole area is due to be redone. Realign the streets, consolidate parcels as necessary, build a single parking garage with well thought entry/exit/ped design, and make better use of that other land immediately adjacent to the good transit.

There's opportunity to create a few thousand housing units there, easy to live car-free with a combination of local amenities and an MBTA to take you to work (if that ain't local too).

There was a neighborhood

There was a neighborhood sanctioned plan (after years of meetings) that Menino agreed to with the Rutherford ave reconstruction, to make it more people oriented and many of the other things you mentioned. Once Wynn got the casino license in Everett he was able to drop money to kill that plan and Menino cancelled it, and we were left with nothing.

I've been saying this for years

The BRA has had a plan for Sullivan Square in place for years, but they haven't done much beyond reconfiguring the road network. It's way past time to get it rolling. I don't see why we can't have a large mix of high rise and low rise buildings housing thousands of people. It seems like a great spot for some tall buildings with very few residential neighbors being impacted. http://www.bostonplans.org/getattachment/60148791-0d78-4fe7-8a63-454bdf2...

I wonder which mayoral candidate he's putting his money behind. If he picks right this may just happen! He might have to rename it the Big Wu!

Don't judge until you see the green of their money.

Are you even familiar with the area?

While I agree with the "burn it all and start over" comment above, the vibe that I get from "nope" is more OMG OMG TOWER and not "I am familiar with the area and fear for the sanctity of freeway and train lines next to it".

My bike commute takes me through this blighted nocityland and change cannot come soon enough. Boston ignores the infrastructural problems here, as does Somerville. I once reported a developing sinkhole problem to both cities and neither bothered with it for a month. It isn't near anything but freeway, rail line, and train station. There is no neighborhood here. It is, in a short phrase, an abandoned and blighted junkyard shithole. I'm completely amazed that it hasn't burned itself down completely already.

Going to be a nice island waterfront tower before too long, too. Heh.

The square itself is a

The square itself is a wasteland of parking lots and too-wide roads, thanks to lack of city and state leadership when the overpass was torn down.

But the blocks to the east aren't a nothing zone. Here are some views of what's there:

Cafe: https://goo.gl/maps/qk7gWeJ3SMat3JwS7 Clearly this was once residential upstairs, as were the houses next to it. I'm not sure if it still is.

Loft/industrial space: https://goo.gl/maps/p5NHKNbUL7tc7BHn9
I'm sure the artists and craftspeople there wouldn't appreciate you calling their space a shithole. (Dismissing other people's space as a shithole reminds me of a certain person I'm sure you don't want to emulate.)

Plus the MBTA's biggest facility. It's not the prettiest, but you can't have car-free transportation without a transit yard.

Yes, Sullivan Square desperately needs a redesign. But think about the squares around Boston that you like spending time in, and notice how many of them don't have 29-story towers.

As laughable as these examples are just wait til you see what's around them.

That poor building used to house a shady-looking bar called Gentleman Jim's way back when people actually worked at Schrafft's, Hood and all those other places where one could knock back a couple of shots and some brews for lunch without giving it a second thought.

I'm all for any type of development in that part of the city which has been blighted for fifty years now, but without [major] infrastructure improvements the howling about the traffic there will never cease. I'm not advocating bringing back the beautiful overpass to Rutherford Ave., the ramp is still there, but maybe some creative thinking and state/federal dollars would be helpful.

If I hadn't seen the username

I would have wagered that MC Slim JB wrote that first paragraph.

It finishes construction at same time as the revamp of the Bunker Hill Housing Project, which seems like it will never happen at this point thanks to Charlestown Neighborhood Council and accompanying NIMBY's.

New North Washington Street Bridge delayed due to bad welds
Healey running for governor; can she break the Curse of the Attorney General?
BPS rejects parent proposal to shut Charlestown High School to make way for new school largely free of BPS oversight
LaMattina might run to fill Edwards's council term, but would vow to focus on constituent services and not run again
Edwards wins special Democratic state-senate primary, which means she'll be replacing Boncore
Inside a Charlestown church in the 1960s, but which one?