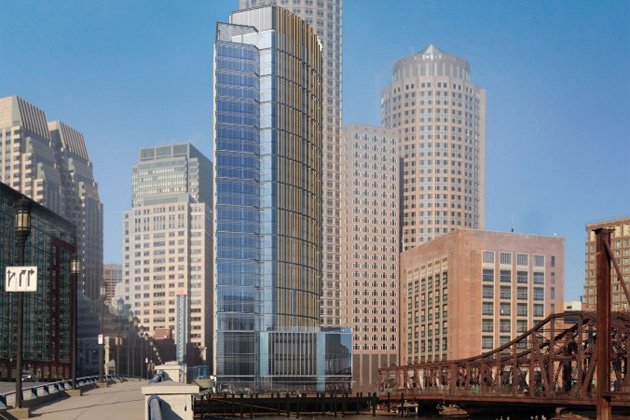 Rendering by Elkus Manfredi of the view from next to the Barking Crab.

A development team last week filed plans for a 25-story, 357-room hotel with 9,000 square feet of room for the James Hook seafood concern on what is now Hook's almost half acre of land on Atlantic Avenue between the Moakley Bridge and what's left of the Northern Avenue Bridge.

Hook and builder Moriarty Partners of Winchester, have been talking about the project since 2013 - five years after Hook's original building was destroyed in a fire. The filing last week sets off hearings and meetings that the companies hope will let them begin construction in early 2022, with completion scheduled for the fall of 2024.

James Hook, which has been selling lobsters and other briny products since 1925, would occupy much of the new building's first floor with both a seafood store and a restaurant.

The filing specifies that the new hotel represents the culmination of 400 years of Boston waterfront history:

This proposal for a new, high-profile, landmark hotel building on Hook Wharf (Project Site) represents today's highest and best use of a premier location on Boston's 400-year-old, continuously-evolving, active urban waterfront. Wharf structures have had a notable impact in the shaping of Boston's waterfront since the 1700s. Over many generations, merchants constructed wharfs and piers along the Boston Harbor to connect Boston by water to the world beyond. As Boston grew, these structures were slowly incorporated into the land, with roads between warehouses and other mercantile buildings radiating from the waterfront into the city. From its early incarnation and growth as a thriving commercial port, its shoreline ever evolving as a result of those commercial demands, Boston's waterfront now provides the opportunity to implement and build upon a succession of planning efforts informed by rigorous public engagement.

The filing says the project will include improvements for the public:

The Project will establish a new Harborwalk connection at the water’s edge while also providing new public open space along the Fort Point Channel between the Evelyn Moakley Bridge and the planned replacement of the Old Northern Avenue Bridge.

The filing also specifies work to benefit both landlubbers and seafarers, including a new Harborwalk segment and open space between the Moakley Bridge and the Northern Avenue Bridge replacement. Also planned: Docks that will not only allow for water-taxi service but will let fishermen tie up and deliver fresh catch to Hook - and recreational boaters to slip into a berth for lunch or dinner at the Hook restaurant or to pick up some food to go for final preparation in their own galleys.

The filing says the developers are looking at ways to mitigate flood issues as sea levels keep rising, not just for the building itself but for the surrounding waterfront.

In addition to the BPDA, the project will also need the approval of the Boston Conservation Commission and the state Office of Coastal Zone Management.

Build the project yourself. Profit.

This site has the option for

This site has the option for comments: therefore no need for people to clam up.

But there is a world's of space between shut-your-pie-hole and buy-the-property-and-do-the-redevelopment-yourself. Even the developer recognizes this:

The first comment about the use of the space or the architecture seems safely in that zone.

We have a long history of public oversight of private development (let's start with basic zoning laws). The real question is: Why are you so upset about it?

Somehow he's pissed that Rem Koolhaas has not stepped up and designed something that satisfies his taste.

I love people who are defense bill boondoggle with other people's money and ideas for a site in this city. These are the same people who say "Somebody Should...." or "It is a shame that place is closing. I haven't been there is 20 years but they should keep that place open".

It would be great if we could have the Oslo Opera House on the site or the Bank of China building in Hong Kong here, but you have a tight site, needed public benefits, and rising sea level concerns to deal with and try to make money on the site.

If you want something there that satisfies your design desires for the site, buy it and build it. If not, too bad.

If you want something there that satisfies your design desires for the site, buy it and build it. If not, too bad.

These are not the only options.

When John replaces Don, and becomes dictator, we'll follow the demand that the inferiors shut up. Otherwise, instead of being a crank, try sharing how fortunate you and everyone is to live where clams can be found fresh and tasty.

What were you expecting

Apartments that cost seven figures to build rented out at no more than $600/month?

too bad a better restaurant

too bad a better restaurant than hook won't be in it.

James Hook has fantastic lobster rolls, chowder, and fresh seafood and lobsters. Can’t be beat. That family works hard and does great.

The Hook building has character, and is somewhat unique to the waterfront and Boston.

The proposed tower (like much of the new waterfront) looks like all the other towers here. And in Cleveland. And Houston. And Bangkok. And Berlin. I'm not saying we should preserve every 2 story wood building (and no @JohnC, I haven't bid on the land myself) , but it feels like a bit of a loss for the city.

The Hook building burned down years ago

It's not there to be saved now.

The look today. Nothing especially "Boston" about this any more.

Get on it UHubbers! You can do it.

The last place you can get out from the 93 tunnels is at the Hook lot. They had better build in footings that allow for new rail tunnels directly underneath. Better planning = Lower taxes. Take a look here for the NSRL plans:
http://www.northsouthraillink.org/construction

Boston could stand 2x the

Boston could stand 2x the development and 300k more people. This town is empty and sad. More people, more social and economic diversity, more vitality would be so welcome.

At least they need to save the lobster weathervane!!

And also the classy wooden sign with "J. HOOK" that faces the channel.

Walling off the harbor with Dubai style buildings sort of destroys the waterfront. Smaller buildings at the edge. Larger buildings farther back. Much nicer.

As a pedestrian, all buildings wall off the view of the waterfront the same.

But unless you are taller than a one-story building, it doesn't matter how tall the building is -- you won't be able to see the water.
In terms of "walling" (which I agree can be a problem), what matters more is how wide the building is and how much it invites the public to travel around it and along the waterfront. Some of the buildings along Fort Point Channel technically allow public access but are inhospitable enough to discourage it. A design that creates inviting space (the Intercontinental waterfront comes to mind) would be great.

For sunlight, airflow and the oppressive feeling of being in an urban canyon.

I actually like urban canyons sometimes, especially in a major city's central business district. If I want waterfront with less height I can go to the Navy Yard, Lovejoy, East Boston, Dorchester... literally anywhere other than right downtown. There's lots of waterfront to choose from in Boston.

Cross the bridge there and you can easily walk right along the waterfront in the Seaport.

In the old Boston Garden balconies

we used to say "'sit down asshole", to those who were ignorant enough to stand at the wrong time. This is pretty much the same situation. I'm in front so I'm going to just build up and screw everyone else. There are at least 91 reasons why this proposal will not be built.

Truck driver Sumner storrows
Black Friday nightmare in Downtown Crossing
Basketball trainer charged with sprinkling drugs on woman's drink, raping her, leaving her bleeding and covered in bruises
One of our turkeys just gave up and got itself ready for Thursday
Rhode Island man, trainer of NBA stars, charged with drugging somebody's drink in downtown Boston, then raping her
That is some slide