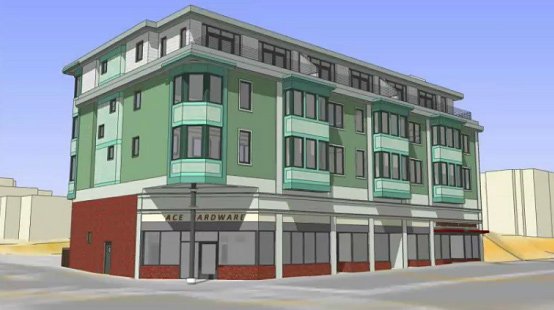 Update: The colors in the rendering are not the final colors.

The Zoning Board of Appeal today approved a proposal to add three floors of apartments to the building that now houses Ace Hardware and several smaller stores on Washington Street at Metropolitan Avenue.

However, the board agreed to ask BPDA designers to work with owner Josef Porteleki and his architect to figure out how to increase the 14 parking spaces he now has behind the building, after residents of the Metropolitan Avenue dead end there said people already block their short street by parking illegally.

Porteleki's proposal calls for his new tenants to share the existing 14-space parking lot behind the building and off the Metropolitan Avenue dead end with the stores on the block, which he said would work because most of the stores close by 5 or 6 o'clock anyway. He added that building is on three bus lines.

The mayor's office and the offices of city councilors Ricardo Arroyo, Michelle Wu, Michael Flaherty and Annissa Essaibi-George all supported the proposal.

Three residents of the dead end all said they wanted to support the project. "I love Joe!" Sarah Holden said.

But they said they were very concerned about what they said was already a bad parking situation there, one they said would only grow worse if residents parked their cars there all day during the week, which would force still more people to try to park illegally on their street.

Porteleki said the problem is really the gas station across Metropolitan, which he said parks cars on the street and uses it for tow-truck access to its lot. But he agreed with acting board Chairman Mark Erlich to look at squeezing more parking in behind the building.

That rendering just looks odd. Like the building was dropped into a parking lot of a strip mall in Phoenix or West Texas or some arid concrete place.

It's unfortunate that they are being asked to sacrifice parking for their business to add more housing to the neighborhood. Granted, I often walk here for small stuff but they serve a larger community and do sell heavy stuff that requires a vehicle. That building above Redd's/Chilacates seems to have gone up without parking issues - should be the same for this one. There's a bus stop literally outside the door!

As a resident of the dead end

As a resident of the dead end side of Metropolitan Ave for the past 24 years I can tell you that most if not all of the residents on the street love Joe and want to support him. That being said you have no idea what it’s like to try to get down the street off of Washington street when cars are parked along his building. Especially when someone is leaving the street in the opposite direction. You can’t period. I’ve almost been hit by vehicles coming down Washington street because I had to stop because I couldn’t get down the street. I have filed numerous 311 reports.

I just wonder if more people would park on Washington though? Or is the entrance for residents going to be in the back?

It's unfortunate that parking

It's unfortunate that parking comes above everything else. It's why this city/country can't move. Too many cars and not enough transit infrastructure.

Rendering is not final!

The colors and design details are still to be determined. It will certainly fit better with the surroundings in the end.

Continues the approval of ugly ass developments. I'm glad the ugliness is citywide and not just in Southie and Dorchester.

I don't want it to be pretty

I just want enough built to drive down housing costs. Let's talk about whether we should make some bullshit regulation to make people have pretty houses after we achieve that.

Citizen complaint of the day: Fireworks season already?
A beam in thine own street
Power blinks out in East Boston, Roslindale
Mom was driving kid with loaded gun in his pants down Hyde Park Avenue, police say
In one Roslindale house, sharks live in the walls
As Roslindale laundromat is remodeled, its past is revealed