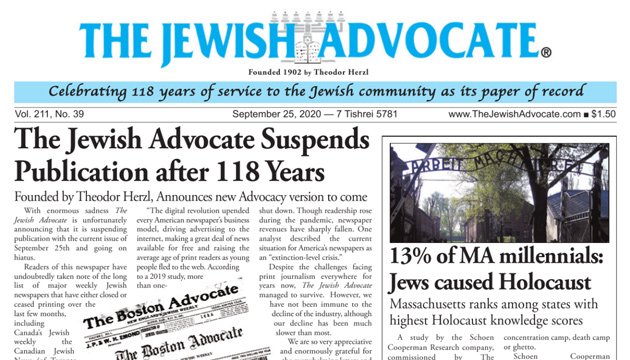 The Jewish Advocate announced this week that its issue this week will be its last in print.

The newspaper, based in the former Boston Post building on School Street downtown, was started in 1902 by Theodor Herzl, who was also the father of modern Zionism. The paper said that in the past, contributions from readers and non-profit groups had helped it weather an ongoing decline in ad revenue, but that the Covid-19 pandemic, which accelerated the collapse of the print ad market, just proved too much.

Please know that we have done everything in our power to continue for as long as possible and it is with tears in our eyes that we concluded that our decision to suspend publication is a sad but necessary response to this crisis.

The Jewish Advocate added, however, it will try to continue online as a new Web site that will

Advocate for Jews, the Jewish community and for the State of Israel, so as thereby to continue the mission envisioned by Theodor Herzl in founding The Jewish Advocate 118 years ago “to inculcate Judaism into the community and progress the cause of the re-establishment of the Jewish faith and a Jewish state.” It is our intention to also provide an independent forum for primarily Greater Boston news about our community and various organizations, and importantly, debate and discussion of the issues, organization and programs in our community.

Earlier this year, the Jewish Journal, based in Salem, said it might have to shut as well, but it raised enough to stay afloat.

Right in the middle of the High Holy Days, midway between Rosh Hashanah and Yom Kippur.

grandma would have been very upset

If she was still here to hear this news.

That headline/story on the final printed issue.

We're doomed. This is what generations of devaluing education looks like.

I was aware of the existence of the Jewish Advocate and it's office in downtown Boston, but sadly I never read an edition until today.

Below is a link to the article in question about the frightening ignorance of the Holocaust that exists in Massachusetts. This is horrifying, and unfortunately we see this kind of ignorance in full display across America. I suggest everyone should read this.

How many frightening instances of ignorance of other the examples of man's inhumanity to man exist in Massachusetts?

Surveys conducted by advocacy groups should always be taken with a grain of salt, because you know they are motivated to arrive at certain conclusions.

First, this org's survey created a "holocaust awareness score" partly based on whether people knew that 6 million jews were killed in the Holocaust. If you thought 2 million jews were murdered in the Holocaust, that was considered a fail. I don't think that makes sense. There's an old joke - after a science talk about the Big Bang, a man walks up to the scientist and asks, "Excuse me, did you say the universe was going to end in 4 billion years, or in 14 billion years". The scientist answers "14 billion years". The man says, "Oh thank you! That makes me feel so much better." That's like needing to know the exact body count of the Holocaust.

Second, for the claim that millennials thought that Jews caused the Holocaust, exactly how did they phrase the question? The website for the study tabulates a lot of results, but glaringly does not share the questions they asked, or the methodology for how they grouped responses. My guess is some people with near-zero Holocaust awareness were asked "What caused the Holocaust" and they response was "I don't know, something involving Jewish people?" Meaning the accurate interpretation of the response is "I don't know", not "Jews caused the Holocaust". This is analogous to how they traditionally do police lineups, where the witness picks one person out of a group standing together, versus how they should do lineups, where the witness is shown an indefinite number of people one by one, and flags one only when recognition hits them.

Even though many people have little interest or knowledge of world history, I think it's worse when people try to exploit that to push their agenda.

I ask because I don't have children and my K-12 education was many years ago.

Does the typical history curriculum in Massachusetts public schools include the Holocaust?

Is teaching the Holocaust mandated in Massachusetts or in any cities or towns?

Even if it's not mandated, I don't understand how you can teach about WWII without talking about the Holocaust.

If you don't know your past

If you don't know your past how can you decide how to guide your future?

And that other headline: We MUST never forget.

I worked there as a copyeditor for two years around 2002. It was dying even then; it had just been purchased by a British Jewish conglomerate and they had no clue how to run an American newspaper. They kept insisting on celebrity-tabloid-type articles and seemed to have no understanding of American Jewish culture, never mind Boston Jewish culture.

But even without that, they kept running into the problem that the young folks were just not interested in subscribing; they associated it with their old fogie parents and their old-world values, or something. The entire staff turned over twice while I was there.

Then the internet came along, of course. After I was laid off, I read that they eventually stopped paying the reporters as well as the copyeditors and pushed for volunteers to do the work. Looking forward, unless they attract some new voices and ideas, they will be just one of a zillion web sites to choose from out there.

Sad, really; my mother and grandmother talked of it fondly. It's a shame it could never become the multi-generational local Jewish voice that it should have been.

When I was editor (2014-2015) we tried to reach out, including getting the publisher to allow some articles to appear online as a way to lure in new readers, and running articles that reached out to all areas of the Jewish community. Unfortunately, while the publisher claimed that what he wanted me to do, he really didn't.

As for paying writers, he was already trying to get a lot of stuff without paying, but I was still paying freelancers and looking out for their interests. My understanding is that at the end, only one freelancer was still getting paid.

Good for you for trying!!

Good for you for trying!! Same publisher? *checks masthead* Yup, not surprised. Again, such a shame.

.... not to mention the political slant

The Boston Jewish community is lively and diverse, theologically and politically. Unfortunately, the paper chose to cater to the hard-right. You can't sustain a subscription base that way.