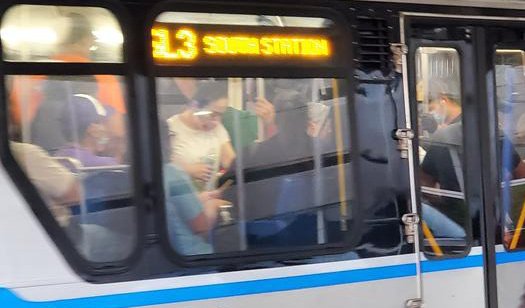 Can you add additional SL3 buses to south station in the early commute? The 540am bus looks like the red line for a Redsox championship parade.

Wasn't "return to regular schedule" supposed to be in Phase 3?

If I understand correctly, the MBTA was supposed to return the bus routes from the "emergency" Saturday schedule to the regular 2020 FY schedule in Phase 3, but the MBTA has not said when that schedule will return.

I can understand if there is little demand on certain routes, or the Saturday schedule works out better than the weekday schedule, but as rapid transit and commuter rail has been brought back to normal, why haven't the buses followed suit? (Exception: the key bus routes, which now have an increased schedule back to normal.)

- Does the MBTA fear that there won't be enough buses or drivers to space out people? The MBTA is receiving new buses and retiring older ones; wouldn't it be prudent to use the older buses for extra space?

If restoring the regular bus schedule is being held until Phase 3, Step 2, or even Phase 4, the MBTA and the Governor should say so! Riders who don't want to ride perpetually crowded buses see right through the "we'll have the bus supervisors figure it out" excuse.

The crowded trip in the photo

The crowded trip in the photo seems to be the first trip of the day. Even returning to a regular full weekday schedule would not reduce crowding on that trip. Looks like they either need to add an even earlier trip, or have an additional extra second bus leave right behind the first. From what I have seen, most of the non-key bus routes still seem to have low ridership. I don't expect them to return to a full weekday schedule for buses until schools reopen (assuming they do) in the fall.

I used the Silver Line through the Seaport daily for several years, but I am trying to avoid it as much as possible now.

I am not sure if headways have been modified on SL1, SL2 and SL3, but it sure feels like it, as 10 minute waits in the South Boston Waterfront Transitway seems to be normal for ANY bus inbound, at least at the times I take it.

The SL3 is always crowded, and more trips need to be added. Last night at 11pm, a half-dozen people were waiting for SL3 at South Station, and more than a dozen at Courtyard Station.

I don't think they are even running the short-turn SLW right now.

With street running coming this fall for Transitway work (and it needs a bunch for being less than 20 years old), there's even more reason for me to avoid it.

But hey, we've only been waiting 10+ years for the outbound countdown clocks. I wish it would just be converted to light rail, as soon as possible.

Because it's a saturday

Because it's a saturday schedule, the silver line way short turns don't run as much.

this whole thing about aerosols lately makes me think MBTA vehicles are a petridish pretty much.

And the mask requirement, they won't enforce.

I just love sitting next to someone coughing up a lung with no mask on and there's little I can do it about it except take matters into my own hands.

Yeah.
I was a little out of my regular orbit last week - a couple of CR trips between South Station and Whitman.
On the plus side - smooth rides, bang on time, and not crowded.
On the down side - conductors never came through, so no fare collection (first trip, like a dope, I had promptly activated my e-ticket; second trip I took a paper ticket, so I have 30 days or something to get some use out of it) and no mask enforcement. Delightful when a couple came into our nearly empty coach, no masks, sat directly across the aisle from me, her on his lap, and started swapping spit.

Is this anyway to run a railroad? Sooner or later the MBTA will have to enforce their own rules and when they do grab some popcorn and enjoy the show.

SL3 starts in Chelsea, 111 starts in Chelsea, 116/117 cuts through Chelsea... All these lines are crowded no matter what you do. They are filled with essential workers and front line workers who can't work from home. They are crowded during a pandemic, during snow, early in the morning, late at night. Plain and simple they should never be cut or reduced, especially if you want people staying apart.

This city should have a subway but it doesn't so we use what we have. If the state wants to save money by cutting down buses they should look elsewhere. I've been watching the crowds waiting for mass transit around here and demand never really slowed down.

Boston to Lynn, stopping at Chelsea in between? Is it possible to reverse a train in or near Lynn?

The Commuter Rail line isn't all that crowded in Chelsea but that may change with the big move to Market Basket.

Mostly what we need is for the MBTA to not treat all bus lines the same. Some buslines let up on off hours and others do not. I've been on buses from Downtown to Saugus where I have been the only one on it... That's never happened with the 111.

The other thing they need to stop doing is raiding our buses when they need shuttles for other locations. It happens often and when it does you can really feel the impact on overloaded buses.

MS-13 member admits to helping kill a teen in a Lynn park
Jazz musician Chick Corea, Chelsea native, dies
The Burbs Are Hot in Boston - Here Are 4 of the Best Suburbs to Live
The Clauses visit Chelsea
Suffolk DA moves to vacate 108 drug cases that involved evidence that might have been mishandled by disgraced state chemist
Alpaca is served