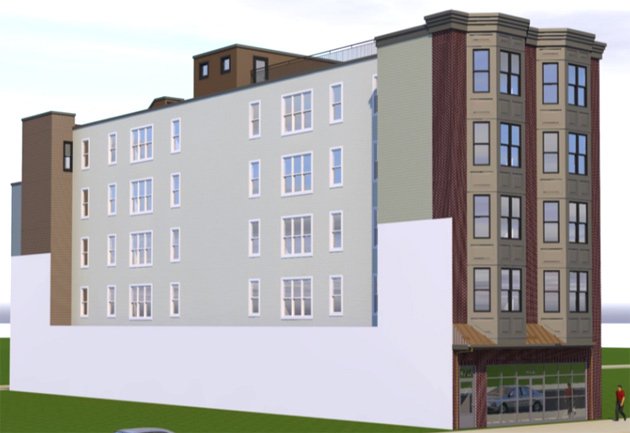 Charles McCarthy and Patrick McDevitt of East Way Development LLC have filed plans with the BPDA to replace the building with Ottavio's Barbershop at 472 W. Broadway with a five-story building with 16 "compact" condos.

The units, all with two bedrooms, would be around 615 square feet, under a city "compact living" pilot that lets developers build units smaller than normally required on the theory they will sell them at reduced prices.

The proposed building would have 11 parking spaces - in a garage with "a three-tier semi-robotic auto lift." The compact-living pilot requires parking in buildings more than a half mile from a train stop - the building is at least 0.7 miles from the Broadway and Andrew Red Line stops.

In addition to the BPDA, the zoning board would also have to sign off on the proposal, which is denser and on a lot that is too small than allowed under current zoning.

Two of the units would be sold as affordable. The first floor on the Broadway side of the building would be used for commercial space.

In their filing, McCarthy and McDevitt describe the $9 million building's exterior esthetic, which they say was designed to fit in with both existing buildings and with new buildings approved at 480 and 457-469 W. Broadway:

The exterior finish materials proposed for the West Broadway side will be consistent with much of the older housing stock around Perkins Square: brick veneer, bay windows with metal/wood panels,and accent metal roofing. The exterior finish materials proposed on the Athens Street side reflect a more industrial, streamlined aesthetic: colorful lightweight concrete panels, stacked brick patterns, and natural wood lap siding. The materials and architectural massing have been designed to visually reinforce the contextual mix of housing types and architectural styles in the neighborhood.

They hope to begin a year of construction this fall.

I'm actually very impressed with this. It fits the Victorian "character" of the neighborhood, is a dense mixed use project, and has a parking ratio less than 1.

All units should be...

.... low and affordable housing. The parking areas should be more housing or storage or common area. There should be a loading dock rideshare pick up and drop off area that does not cut off pedestrians or bus bike lanes.

should all units be "low and affordable" housing?

Because this is what Bostonians need..

... as opposed to what outside developers and some politicians want for their own benefit.

Can't tell if this comment is a joke or not

Each one of those units costs $562,500 to build. Sounds like someone slept through his math class, or thinks there’s a magic hammer and sickle one can wave and make math disappear.

The units would cost a heck

The units would cost a heck of a lot less to build if the robotic parking garage were removed. Not only would that horrible expense (and its ongoing maintenance be eliminated), but they could also use that space to add more units, or maybe some profit-generating convenient retail.

So what you're basically saying is...

They are being built and will continue to be.

Yes, housing will be built, you are correct. These comments are sad.

No, it's economic reality in Boston.

The construction cost alone for this project will be $6.2 million and that doesn't include the cost of the land or all the legal wrangling. With 16 units we're talking about $400,000+ per unit just to get it built.

Further, the parking requirements are set by the city and this project is already one space short of what is required for the number of units proposed. Do you really think nearby residents will be eager to have more people competing for on-street parking? I don't. I think they'll try to derail it just like so many other projects in other neighborhoods.

There should be zero units on the ground floor, and it should either be garage or common areas that can be hosed out.

Re-check your topo map. 472 West Broadway is above the 50' contour.

Zoning already requires no habitable space on the ground floor in areas subject to coastal flooding. Look at any new building near the beach.

I feel the windows on the building's side facade effectively guarantees the lot next door would never get developed to add a few floors.

This is a good example of how NOT to do development in Boston.

This is why we have zoning.

This is why we have zoning. They set the rules in advance as to whether windows are allowed, and what height can be built at what distance from the property line.

These windows appear to be set back a few feet. It wouldn't be pleasant to have your view turned into an air shaft, but that possibility should be one of the first questions a prospective buyer would ask the real estate agent.

Some zoning codes such as NYC's allow windows on the property line, with the expectation that some day they might get blocked if something tall goes up next door. They wouldn't count for legal requirements for windows in a bedroom, etc.

Ottavio and his barbershop

Ottavio and his barbershop will be missed

I thought the rule of thumb for builders was roughly $250,000 per 2 BR unit. Does the $400,000 reflect inflation or some kind of special components like the parking lift?

Citizen complaint of the day: Fireworks season already?
Citizen complaint of the day: Naked man in the window doesn't meet my attractiveness standards
Developer proposes complex on Dot. Ave. in South Boston that includes a 20-story residential building and, of course, life-sciences space
Developer takes wraps off design for proposed lab building in Flynn industrial park
Massport hopes to open Boston Harbor to larger container ships this fall, but not Ever Given large
2,000 lawn flamingos flock to the Seaport