Oh save us! Dead train near Davis 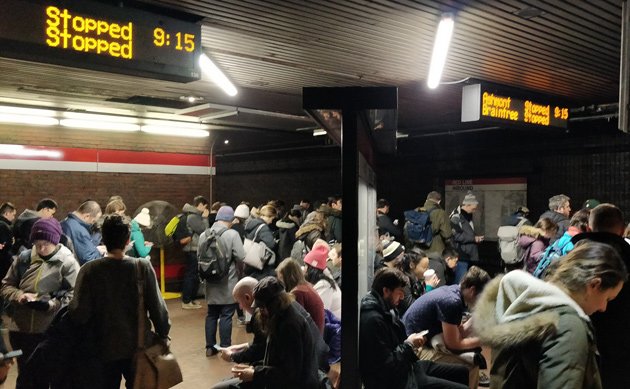 Been at Davis for 25+ min. Sign has said the same thing the entire time. No trains either direction (I'm guessing because our train is stuck at Harvard or Porter). Where can I get a refund for my hiked fare @MBTA? Ideally compensation for the Lyft I will have to inevitably take.

The MBTA initially blamed a train with "mechanical problems" at Davis, but commuters report no sight of trains there, as Yael reported a few minutes earlier:

For the last fifteen mins no train at Davis and the signs say the next Ashmont and Braintree trains are four stops away. I think it's more like a standstill than a ten min delay

Announcement said we're standing by due to "a disabled train heading into Porter and uh Davis", but we're southbound and past there at Harvard. Should I just be giving up here?

Gail Waterhouse checks in from a despairing Harvard Square:

We’re stuck at Harvard where they told us the train is “standing by” due to a disabled train between Porter and Davis.

Stefan Economou is stuck at Central:

At Central, platform is stacked and trains not moving. Announcement is inaudible. Avoid Red Line if possible.

EMS had to pile out at Central:

We just got kicked off train at Central . No one knows what to do. I can walk to my destination but there's a crowded platform of people who need information.

Dylan Manley just finally gave up and decided to risk the tender mercies of, um, the Orange Line:

I just finally bailed to take the 89 to Sullivan and get to downtown that way. Let's see how well the orange line is running....

Ya this bad boy just rolled by pic.twitter.com/vQtFSXGWSg

No shuttle busses.
No employee telling people that maybe people should take a bus instead.

It would help at least plan for the situation if the T told its many employees what to tell the riders in these situations. The consistent failure of that is why people are fed up. If there's a problem, communicate it. Ideally there wouldn't be any problems but they will happen. The LEAST the MBTA could do is tell its employees to explain to the riders what to expect during these failures.

It would also help if the conductors could manage to sound slightly less angry at the passengers who are, you know, trying to get to work. The other day a train pulled in and a conductor angrily barked, "SECOND CAR OUT OF SERVICE. MOVE AWAY FROM THE CAR" as if she'd been saying that for 10 minutes already and the people on the platform were just trying to make her life difficult.

And when trains are really far apart, repeating "There's another train directly behind us" just makes people madder.

So a Red Line train that's been stuck in a tunnel for an hour (the one that caused the whole problem, or a different one? Dunno) finally gets moving and pulls into Porter and then keeps on going without letting passengers off.