Boston has tons of statues, but only a select few are giant heads rising from the ground. The other day, we went on a tour of the city to take a look at some of these bad boys and girls:

A bird rests atop a human head with fish scales floating in a puddle of water. The sculpture suggests that both mankind and the animal kingdom can influence each other and adopt each other’s characteristics. We are reminded of the delicate ecosystem we belong to and subsequently impact.

Next, we headed down Dorchester Avenue to Ashmont in Dorchester. Just before the T stop, there's a small plaza, with a giant sleeping head:

"Sleeping Moon," by Joseph Wheelwright of Uphams Corner, was installed in 2010, as part of extensive renovations to both the T station and the neighboring Peabody Square:

The moon, the original timepiece, seemed a good companion to the much-loved iron clock in Peabody Square. "Sleeping Moon" 'floats' close to the ground atop a mirrored post, as if waiting to assume the heavens. Its light green patina surface with black and gold details is alive with craters, mountains, and rivers, inviting viewers to examine the details on all sides.

Over on Crawford Street, across from Hollander Street, in Roxbury, another giant head sits next to the National Center of Afro-American Artists:

Symbolizes the abiding creativity and spiritual strength of black people since the birth of civilization in Africa, humankind's original home.

Big baby heads in the Fenway

On the Fenway/Muddy River side of the MFA, you'll find two giant (as in eight-foot-tall) baby heads, one "Night" and the other "Day" (one with its eyes closed, one with them open) both by Spanish painter and sculptor Antonio Lopez Garcia (hmm, what is it with Spaniards and giant-head statues?). Installed in 2008, they both honor his granddaughter, Cameron.

Now, if you ever get to feeling sorry for the big baby heads in the winter, because they look so cold, sorry, but the MFA frowns on you knitting caps for them, and will remove them as soon as possible, as roving UHub photographer Steve Chase discovered a few years ago.

Abstract maestro on the Esplanade

Down on the Esplanade, in contrast, the Esplanade Association delights in caps made for Arthur Fiedler's giant head, at least right before and right after memorable Boston sportsball happenings:

The Arthur Fiedler Memorial is the work of Ralph Helmick of Newton:

This portrait addresses the mystery of personality and public perception.

Arthur Fielder, the longtime conductor of the Boston Pops Orchestra, was a man whose media image and private persona were at odds.

The sculpture’s esthetic approach engages distance and “knowing” in a dynamic way.

A layered image, it reads most coherently from afar, becoming more abstracted as the viewer draws near, providing a visual parallel for the character of the man.

The final big head on our tour was at Stimson and Grove streets in West Roxbury, where we find this incongruous Easter Island mini-moai, currently sharing yard space with Halloween decorations, but on display year round:

Its provenance, at least publicly, is unknown.

There are even more giant heads in Boston:

Liam alerts us to a statue at the Harvard Business School in Allston called Inés, by yet another Spanish sculptor (OK, what is going on with Spain and big heads?):

Shown with her eyes closed in a state of meditation or dreaming, her serene expression inspires contemplation. Like a hologram, the sculpture changes and shifts perspectives when viewed from different angles.

Brandy gives us a head's up about Gates of Transcendance at the HarborArts Shipyard Gallery in East Boston, which at first glance seems to show somebody with a splitting headache, but is really about much more:

It addresses the idea of transcendence in a number of ways, which the viewer can experience from multiple views. When you face this monumental portrait, you tend to think about life as a whole and its big challenges. From behind the sculpture, you can look through the eyes, as if looking through someone else’s eyes, to see a different perspective. Walking through the Gates of Transcendence is like taking a symbolic journey, breaking free from the habitual facades we all sometimes adopt, and into a clear new view of life.

Did we miss any Boston big-head statues? Let us know in the comments.

I believe the fist

Oh, it's back! There was construction on that house and it was gone for almost a year. It makes me laugh every time I drive past it, so I'm glad they returned it to its original spot.

I think they were storing it in the backyard

But, yeah, you're driving up Grove and you just happen to look over and, wait, what, was that an Easter Island head?

Moai or Mo'ai for the "Easter Island head" may save a half line when editing.

It's definitely made of

It's definitely made of styrofoam, so giving it the honorific of the actual religious statues on Easter Island seems kind of disrespectful, honestly.

Some good head in Boston.

Some good head in Boston.

How about Ho Chi Minh's head?

That would be the biggest in Boston, no doubt

But it's a painting, not a sculpture.

What about the big heads in the Encore garden/park? They were there at opening; I'm not sure if they are still there.

*Not technically Boston, but a stone's throw from it.

The Alchemist on Mass. Ave.

How about the pirate who only

How about the pirate who only comes out at night at South Station?

The giant heads at Encore

are a permanent installation, to my knowledge. Here is a photo I took in July: 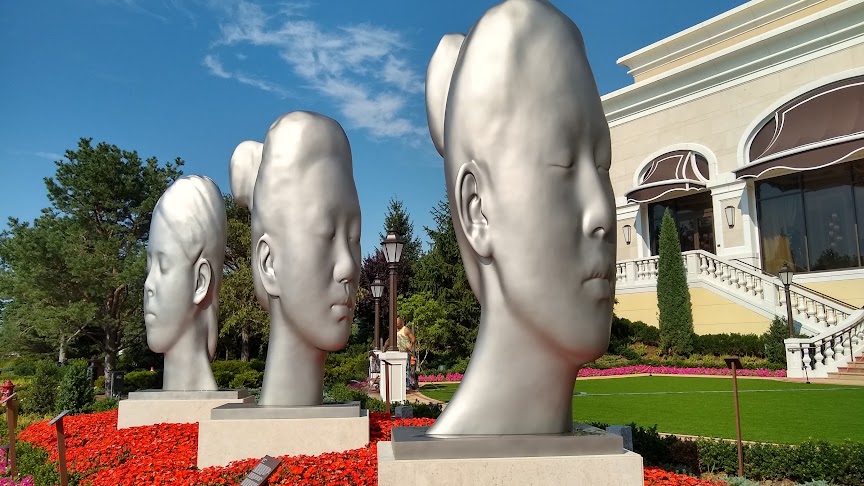 The artist is Jaume Plensa (yes, another Spaniard, born in Barcelona). The heads are named Laura Asia, Rui Rui, and Paula.

EDIT: This is the same artist who made the sculpture at Harvard Business School.

Unreal, like they were photoshopped into the real world. Wild use of perspective. The HBS head has a similar unreal quality.

The Olmecs would be proud of us

Giant heads in a variety of tasteful parks throughout the city.

Get a head in Eastie

Donald McKay in the Greenway

The African Head and the Fiedler head in person.

There's a set of giant heads inside Jackson Sq Station too

Can you link to either a photo you took, or someone else's?

Art on the Orange Line

which park is he in now?

I wouldn’t say I was missing it, Bob.

Before two-alarm Back Bay fire, firefighters were kept busy with flaming trash, Christmas trees and wreaths
Somebody was running around Back Bay alleys lighting trash on fire, might be to blame for fire in Beacon Street building
Back Bay bald eagle bops along the Charles
Two chefs to team up on Italian seafood place in the Back Bay
Of course 2020 would end with a storrowing
State seeks storrowing-stopping signs