Citizen complaint of the day: Be careful walking on Mass. Ave. in front of Horticulture Hall 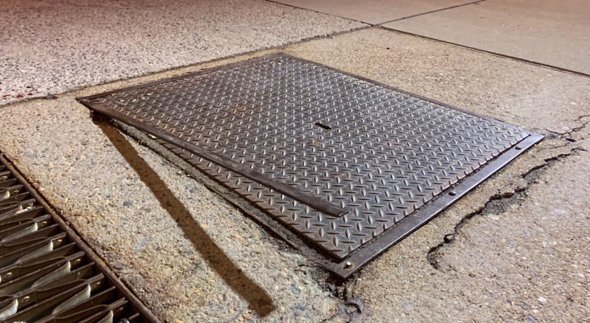 A concerned citizen files a 311 complaint about this strip of metal on Mass. Ave.:

I took a terrible fall on Friday evening, tripping on this metal rail. I think it should be attended to, at least bent down. There's a lot of people around there for the Symphony.

What's in Horticulture Hall these days?... Shakespeare & Company used to be upstairs.

is one of the tenants. Mass Hort sold it years ago, I think to the Christian Science Church.

The decline of Mass Hort is a

The decline of Mass Hort is a tragedy and a textbook lesson in mismanagement of a non-profit cultural organization.

Sadly the BSO across the street is quickly heading for the same fiscal calamity.

Say more about this please?

The board of directors is so

The board of directors is so old they can't oversee the organization properly anymore which has resulted rudderless management.

Donors are dying off, experienced musicians have been leaving along with long time staff.

Over the past decades musicians were asked to take a pay cut while the development office lavishes itself with pay raises and promotions to get around pay freezes.

Part time and some full time staff denied basic benefits while the development office has on the job yoga courses.

Same personnel crap that nearly killed the Boston Ballet and MFA. The development office tasked with bringing in money spending most of it on itself as fast as they can take it in while hemorrhaging existing donors.

Cutting costs on stupid stuff like reusing gross paper programs and outsourcing the food service to a contractor than pockets so much of the profit the organization is losing money compared to when it was in house.

More than half the payroll going to the development office while building maintenance and basic operations suffer.

Buckets of money thrown at Tanglewood for programs and venue improvements that do not have profitable return on investment.

Discounts are being given out left and right such that ticket revenue is gutted.

The BSO needs bold vision from someone that knows what they are doing. Time to bring in someone from the Metropolitan or one of the European symphonies to right the organization with a focus on the performance and not the pay + perks of the fundraising office.

There was also a gender-discrimination suit

Rowe contended that the orchestra discriminated against her on the basis of gender by paying her substantially less than principal oboist John Ferrillo. She argued that her pay was three-quarters of what Ferrillo earned for "comparable work."

How did that one turn out? As I recall she was trying to claim that she should be paid the same base salary as the principal oboist, who is a man. Different instrument (oboe is more difficult than flute), different skill level...seemed to me the only thing she could come up with was gender. My opinion was that if she's so astoundingly talented, she should be able to find a position at the price she wants somewhere else. IIRC salaries for the two positions were just shy of $200k.

I suggest you read the linked article

Anybody else notice a trend?

I'm seeing an unusual level of sidewalk and pavement damage this spring -- axle-bending or ankle-breaking craters seem to be more widespread than usual. Was this a particularly bad winter for ice damage?

I can think of some days like that. But was this worse than previous winters?

If this an emergency hatch from the world underground known as the T.

Because I assume 311 won't actually respond with this

Here is the form for filing a claim with the city when sidewalk defects injure you: