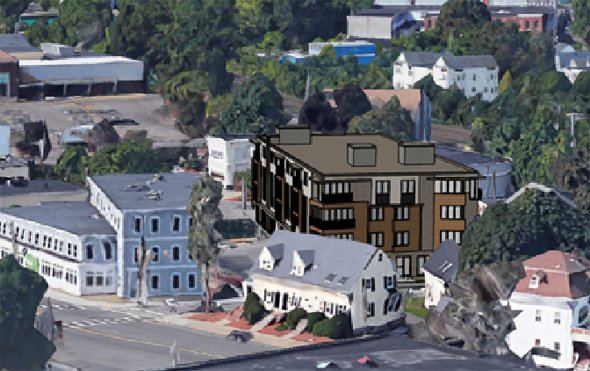 A developer has proposed turning a vacant lot on Dana Avenue, next to the still uncompleted building where the Eagles club used to be and less than 250 feet from a commuter-rail stop, into a 24-unit residential building called the Residences at Hyde Park Station.

Unusual these days for a building so close to a train stop, the proposal calls for one parking space for each unit, under the plans filed with the BPDA by developer Milan Patel of Salem (compare to this 56-unit building with just 5 spaces a block from the Ashmont T stop in Dorchester). The garage would store cars in a mechanical stacking system.

All of the units would have two bedrooms, between 976 and 1,108 square feet, according to Patel's fiing. The filing does not say whether the units would be apartments or condos.

In addition to the residential units, the building would have ground-floor space for a 300-square-foot store or office - as well as a roof deck.

The building has been designed with a contemporary aesthetic in a scale and massing that is appropriate to the larger neighborhood context. ...

The proposed development calls for the creation of a new, attractive and energy efficient building that will enliven and visually enhance the residential look and feel of a secondary intersection in Cleary Square.

The filing notes the presence within a short walk or bike ride of numerous attractions, including Ron's Gourmet Ice Cream and 20th Century Bowling, the Thomas M. Menino YMCA, the Martini Shell, the Bajko Skating Rink and the Blue Hills Reservation. Also nearby, although not listed in the filing, are the Menino Arts Center, the Hyde Park BPL branch (featuring the Menino Wing), one of the only two Papa Gino's in Boston and the District E-18 police station, as well as the Rite Aid and a Shaw's.

In addition to the Hyde Park commuter-rail stop, the application says the building is a short walk to the Fairmount Line and is served by the 32 and 50 buses (the filing also mentions the 39, which never gets anywhere near Hyde Park, and the 40, which only serves Cleary Square on weekends).

Such a scenic view - not. Keeping things world class.

... has never left the US for any reason whatsoever.

I can see the NIMBY cry now

But we don't want our neighborhood to look like an Italian slum, with a roof deck next to a cheap pharmacy

It's a little cartoonish for my tastes

That first aerial view is terrible and the second one is right from the Streetview, including the car and the bike!

Couldn't they drive over and take a better photo? Is that an indication of the kinds of corners they will cut when building this property?

The NIMBYs are already at

The NIMBYs are already at work on this one clearly.

The aerial view is also from

The aerial view is also from an online map.

Cool that you figured it out, but what's the problem? They found a way to realistically visualize the project without spending a lot.

Developers just cut it out

Developers just cut it out with roof decks. At best they're unused 90% of the time, and at worst they just add a ton of noise to existing neighborhoods (the acoustics travel much different than a outdoor space surrounded by buildings).

Then they really aren't adding all that much noise, now are they?

It would overlook more than

It would overlook more than just the Rite Aid. Why the negativity, Adam? This is the kind of housing appropriate for a main street district.

Attack Of The 40 Foot Tall Puddingstone

Unleashed by infernal forces it came from Roxbury to consume and destroy !

Hate to be that guy, but

Hate to be that guy, but there's 3 Papa Gino's in Boston, Hyde Park, Dorchester, and Charlestown.

The parcel is not a vacant lot. It’s currently housing, but a smaller number of units.

Also, I am hoping people are not really taking roadman’s comments as nimbyism. He doesn’t live anywhere near the area.

Where is he then? He better

Where is he then? He better not be in my backyard again. . .

One thing I find gross about the design is the accessible route from the accessible parking spot. The user is to go outside, up a ramp, and then into the elevator lobby. Don't cheap out: put a 1/2 stop at the parking level and then another stop at the street level. The upcharge for 2-door elevator vs single isn't that much out of the profit margin. Then that outer ramp will be emergency pedestrian egress out of the parking level.

Yeah that is really bad.

Who do we message about that?

I would start with the developer. They're probably having community meetings, so finding out the timing of those would be a good idea.

It probably can't hurt to contact the BPDA since it's under review by them. I'm not certain how much say they have in that sort of detail in a design of this nature.

Looking at the review package, the drawings are listed as schematic design, which is still early days in the final design. We can hope that the accessibility aspect will be looked at and modified without hue and cry from the general public.