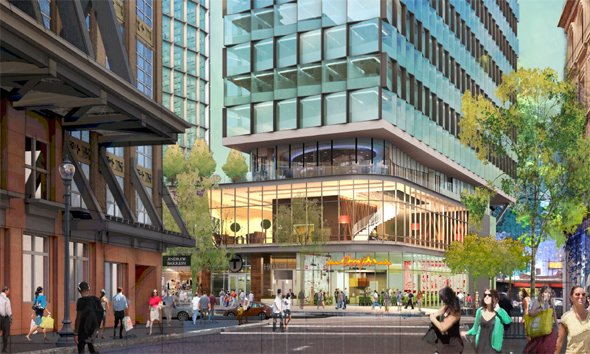 Instead of a view of sky and the turnpike, people on Newbury Street could see this.

A developer's proposal to bridge the turnpike along the more barren side of Mass. Ave. between Newbury and Boylston streets could mean several dramatic changes to the block beyond just towers covering what is now an open-air highway.

Samuels and Associates recently filed detailed plans for its Parcel 12 project, which would include a 40-foot-high "podium" across the turnpike, with 70,000 square feet of retail space opped by two towers, one 14 stories and filled with offices, the other 11 stories and housing either 150 residential units or a hotel. The podium roof not covered by the towers would be used as green space for the two towers.

If actually built, the development would be the culmination of discussions and planning that date to 1998.

Samuels says its project could include turning the current intersection of Mass. Ave., Newbury Street and the down ramp to the turnpike into a more friendly crossing for pedestrians, bicyclists and bus riders.

This would happen in large part by narrowing the intersection by moving the current ramp, which starts right at Mass. Ave. further west along the rump end of Newbury Street. Samuels, however, refers only to "the opportunity for the Massachusetts Department of Transportation to relocate the existing I-90 Westbound On-Ramp" and does not say who would pay for it.

In addition, Samuels says it would re-open a long-closed pedestrian tunnel under Mass. Ave. to the Mass. Ave. Green Line station so that people would no longer have to cross the busy street to get to a trolley.

Mass. Ave. in front of the project would get two dedicated bus lanes, a "cycle track" set off from the road and a wider sidewalk, Samuels says.

Samuels has proposed a two-level garage with space for 150 cars.

Parcel 12 offers an important opportunity to repair a barren section of Boylston Street and Massachusetts Avenue disrupted by the Turnpike, and to knit together distinct Boston neighborhoods: the Back Bay and the Fenway, and the South End and the City of Cambridge by creating a mix of dynamic mixed use development with ground-floor uses that will activate the street, repair the discontinuity in the urban street wall left behind by the Turnpike Extension, and improve the experience for pedestrians, bicyclists and motorists, as well as those using the wide array of nearby public transit options. Designed holistically to address nearby public infrastructure needs, the project has the capacity to improve a long overlooked swath of Boston's urban fabric.

The proposal is one of several that could remake the area around the turnpike where it crosses under Mass. Ave.

Samuels hopes to break ground on the project next year, with construction expected to take about two years.

The proposed view from Boylston Street:

Possible layout for a redesigned intersection and moved turnpike ramp:

This would be great for the area. You can tell Samuels & Associates took the design from their Vanness building in Fenway. Looks very similar.

Hopefully this would eliminate the fence with all those ridiculous locks on it.

It's across the street from the locks, but there's another proposal for that site.

I take it this project also

history indicates believe it when you see it

Would the tunnel actually be clean? Or would is suffer the same fate as many T elevators and just be a good place for the homeless to take a piss?

I think we all know the answer to that question

Under Mass Ave. was closed by the MBTA for security reasons. The MBTA could reopen the tunnel and install security cameras and it would be good to go.

Seriously, is there not enough public interest in this to make it worthwhile? Simply closing infrastructure rather than addressing issues is such a shitty way for government to be.

I gotta ask if you were being sarcastic or not, because I believe that the underpass becoming a "shitty way" was why it was closed.

As Jim Hacker once said

You can blame security for anything these days.

To recall the original 1998 proposal. Hope this one is more successful.

The Mass Pike is a huge scar

The Mass Pike is a huge scar through the city. The drivers on it create tons of air and noise pollution. The state should cover the whole section in this part of the city. Pay for it by raising the tolls on drivers and/or the gas tax. Then sell the land to developers and use the proceeds to improve public transportation. That helps solve multiple problems: noise pollution, funds for public transit and it helps increase the housing supply.

Since we are dreaming on here ...

... and set it up for better Back Bay access so we can get rid of Storrow Drive!

Oh, I recall when people were interested in me around 2010. I got all excited and here we are, barren, treeless, unloved. At least you won't block the views of the 1% from 360 Newbury and don't involve the same air-rights issues.

It will start to repair the damage the Pike Extension did to the street blocks at that end of Newbury.

It's not like the space is being used for anything else. I'd rather have a tower and better roadway/pedestrian access instead of the ugliness that's there now. It's one of the few places where they can put a building downtown without tearing something else down.

Public money isn't being spent so the cost isn't anyone's concern but the developer.

The plan presented has the towers sitting on solid ground (er, fill), with just two stories over the pike and B&A.

So are the Pru and Copley Place.

And the sky isn't falling over there. They will put actual structural engineers on the job. Bedrock isn't just the name of the town in the Flintstones.

...a tower over the Pike was where I used to buy these old-fangled things called "cassette tapes".

Yeah, that was the media in

Yeah, that was the media in that day for those of us with Walkmans and turntables instead of CD players. That store was great for browsing, I always was loyal to Newbury Comics and usually bought my music there as it was a local chain and as the ad went, no "towering prices".

Wasn't there a similar proposal...

...in the South End along Cortes Street, between Arlington and Clarendon, that made some headway? If memory serves, they got far enough along to fence things off and even begin some digging before everything got shut down. Shady developer maybe? Luckily, Samuels has a great reputation and a significant track record, so hopefully this project will fare better.

That was called Columbus Center

and fell victim to the recession.

Better hurry with this one, then.

'Cause the next recession will be here soon, and it won't be pretty.

Yup, this probably won't get started before the next downturn.

And we will be talking about this like we do the Columbus Center. As for that the developer got his approvals and then insisted he couldn't possibly do it without massive tax breaks from both the City and State. Something to keep an eye on.

Newbury Street is an iconic street that gives views of the garden at one end and Fenway at the other... this awful idea encapsulates Newbury Street and the back bay. The shadows and reflections will be horrible for Everyone on both sides and all the way down Comm Ave mall.
They are taking over 40 street parking spots to move the ramp and only giving 150 spaces back to the business in the towers.. the narrowed Mass Abe will increase traffic as is and add more with taxis and Uber’s..
why doesn’t the city/Mbta clean up the current bus stop and pedestrians walkway to help keep the backbaythr backbay and not change it to the Seaport.

Have you seen this block of

Have you seen this block of Newbury St?
And did you even bother reading anything Adam wrote about this?
Ah, yes, so iconic: https://goo.gl/maps/bSHDbc4QXQ32

Moving the ramp is just an idea. No one has gotten to the point of determining how many parking spaces would be taken. But I can tell you one thing - it certainly won't be "over 40". Even if they banned parking on the entire left side of Newbury St west of Mass Ave, that would be by my estimate about 30 spaces. And as you point out, they're ADDING 150 new spaces - a net increase of parking spaces in a neighborhood already choked with traffic.

As depicted, the concept in this proposal does not narrow Mass Ave at all. It actually widens it! The lane configuration stays exactly the same as it is today (1 thru and 1 turn lane in each direction, plus a northbound bus/bike lane), but with an added bike lane southbound.

Also, really? In the same post you manage to both complain about losing too many parking spaces AND about increased traffic because of taxis and Ubers. Hypocritical much?

Hey, that Apple ad is iconic!

At the least, for managing to be consistently some version of an Apple ad for what, 15 years? Longer?

Oh man! I can't wait until we finally get a Ben Siegal in Boston!

...to knit together distinct Boston neighborhoods: the Back Bay and the Fenway, and the South End and the City of Cambridge...

I like the proposal but what does Cambridge have to do with it?