100 years ago, death landed on a Boston pier 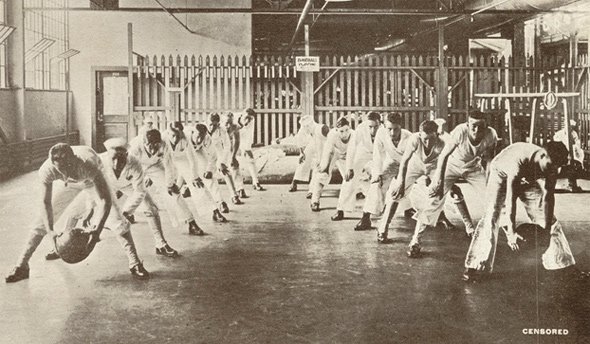 Sailors working out at Commonwealth Pier during the Great War. Source.

In August, 1918, Commonwealth Pier - today's World Trade Center - was a bustling place, with hundreds of sailors arriving there to await their permanent assignments for the "Great War" that the US had entered the year before.

Sometime on Aug. 27 or 28, two sailors reported, yes, flu-like symptoms. Within days, more and more sailors fell ill - 100 by the end of the week. Some wound up at the Chelsea Naval Hospital at death's door - their skin blue from lack of oxygen and covered in purple lesions - even as naval brass tried to downplay what was happening as just some routine grippe, not the far deadlier Spanish Influenza.

Within a couple of weeks, though, the disease had spread into Boston - aided, perhaps, by A Win the War for Freedom parade through the city that included 1,000 sailors from the pier.

By early September, city and state officials tried what turned out to be pretty ineffective steps to stop the spread. On Sept. 11, the Boston Post reported the city health commissioner ordered a roundup of people seen spitting on trolleys and sidewalks. His deputies urged local women to stop kissing their Navy sweethearts. Wellesley College banned its students from visiting Boston naval bases - and forbid its students from bringing any sailors onto campus.

Death notices began appearing in the local papers. The Globe reported on a Quincy teen who died just two days after falling ill:

QUINCY, Sept. 12 - The first death from "Spanish influenza" in this city was reported today. The victim was Daniel F. McDougall, 16-year-old son of Mrs. Bridget McDougall of 7 Bryant av., West Quincy. The boy was taken sick Tuesday and died this afternoon. The death was reported by Dr. T.J. Dion as due to "Spanish influenza." The McDougall boy had worked in a South Braintree shoe factory and was quite strong until taken ill.

With nearly 200 cases to handle, the City Hospital doctors yesterday resorted to masks to minimize the danger of falling victim themselves. Since early last week, a number of physicians are reported to have suffered more or less from the contagion and one of the best-known doctors in the city, Thomas F. Leen, died yesterday at Carney Hospital due to overwork in the treatment of grippe patients.

The Charles Street jail was shut to visitors as guards set up impromptu infirmaries for all the sick inmates.

On Sept. 27, as an epidemic raged to the west at Fort Devens, the Post reported:

By the end of September, some 1,000 Bostonians had died - many of them, like Daniel McDougall, young and seemingly healthy, exactly the sort of people who would normally fend off the flu.

The folks at the Boston National Historic Park report the emergence of a child's skipping poem:

I had a little bird
Its name was Enza.
I opened the window, And in-flu-enza.

Newspaper accounts via the BPL Historical Newspapers links (requires a BPL card or Massachusetts residency to use).

America's Forgotten Pandemic by Alfred W. Crosby is and excellent book on the flu epidemic
https://www.amazon.com/Americas-Forgotten-Pandemic-Influenza-1918/dp/052...

Maybe I've just been in public health long enough to go ... huh? This is still the prime example of a perfect storm of people moving, people massing in public places, and transportation lines in spreading something worldwide.

I've read several books on the subject. I used to work in an office in a building in the Navy Yard. I started having weird and creepy dreams where everyone was awkwardly walking around packed in cots to get to our computers and there were old lights and nurses dressed in Edwardian clothes.

One morning I realized what was going on: The Navy Yard had early and extreme impact of the epidemic. I then found out that the building I was in was the infirmary and laundry. It took me a couple days of searching to figure out that my brain was superimposing old pictures from those books - pictures of lots of cots in the space that I now worked in - dropping them on top of the present-day use of the space. The space had been divided into offices, but the locations of windows, capped off lighting spaces and a fireplace and removed stairwell were still evident.

The creepy dreams returned during the H1N1 mess.

I mean you're an epidemiologist who read up on the subject and you seemed to have forgotten it until it came to you in a fever dream.

What makes you think anyone else remembers it?

FWIW I remember it because I studied it as a history major but more importantly b/c my grandmother's brother was taken as a young man and she never let him be forgotten.

Not really forgotten. It is featured in lots of literature set in that period, like Dos Passos' USA trilogy. There are still a few people alive from then.

Swirly, by getting all rational with interpreting your dream, you're missing a chance to have it featured on one of the Discovery network's silly ghost shows.

Forgotten at the time the book was written

@SwirlyGirl - when this book first came out in 1989, the Spanish Flu was mostly forgotten by people outside the health field other than as something in literature about that era. This was early in the AIDS epidemic, before SARS, before genetic sequencing that allows us to differentiate versions of the flu virus with precision. I had just started working in health research when it came out, and it was eye-opening to me.

Yes, now the Spanish Flu is no longer forgotten. But there was a long time where no one thought much about it, since there hadn't been another world-wide pandemic in decades.

First in the U.S.

And if I remember correctly, Boston was the first city in the United States where the epidemic struck. It radiated out from here to the rest of the country.

Back in the 1980s, we had a neighbor who would have been 10 years old in 1918, and he was still living in the same house, on Concord Avenue in West Cambridge. Across the street from his house back then, was an barn -- later replaced with an early auto dealership, which was being torn down and replaced by condos at the time he related this story to us. He said that one of his earliest memories was the sound of constant hammering, from innumerable wooden coffins being made in that barn during the epidemic.

My grandparents lost two of

My grandparents lost two of their 12 children to the flu around that time (they are buried at Calvary up Blue Hill). My mother would mention their house in Dorchester with one of her brothers and father sick with the flu, yet they survived. All other children following orders, fetching supplies for my grandmother while she cared for her husband and son. The doctor coming and all the windows in the house kept open. It was thought that fresh air, no matter how cold, would keep the rest of the family healthy.

As a young child, even as an infant, mom would put the bassinet outside for our naps for she always believed the benefits of fresh air to ward off the germs.

I did the same and while medicine has greatly improved our survival chances, we all turned out to be "outdoor" kids as a benefit.

Ah, I’ve read about this

The Great Influenza by John Barry is how I learned about this pandemic. I’ve just taken the book off the shelf to re-read. Thanks for the very timely post!

This explains the "No Spitting" signs I remember on the Old El. For some reason I thought they were about chewing tobacco.

When kids just used to hang out in the street
Wu calls for end of BPDA, 10% cap on rent increases in larger buildings, BPS improvements
City council could vote next month on plan to move school committee from appointed to elected
Consultant recommends BPS consider return of Boston school police
Oh for the days when you could enjoy a good cigar after lunch while waiting for your pants to be hemmed, then take the streetcar back home
Councilor Mejia sues Worcester-area blogger for libel