State Police report 19 troopers from Troop E - who patrol the Massachusetts Turnpike - face hearings on whether they put in for overtime shifts they didn't work.

Depending on the outcome of these hearings, those members face a potential change in their duty status, up to and including suspension without pay, while further investigation into the discrepancies is conducted.

Theft of more than $250 is grand larceny.

How is billing the taxpayer for bogus overtime all that different from stealing cash from somebody's wallet?

If the troopers put in an OT slip for 4 hours and weren't actually even at work, this would probably amount to a larceny charge.

If the troopers put in an OT slip for 4 hours but were only there for 1.5 hours and did some work or could at least articulate they did some sort or work you might not have enough for a larceny charge.

My understanding with the state police is that they had 4 hour grants to do 4 hours work and most likely a requirement (or suggestion) to write 8 citations. I'm guessing the troopers put in OT slips for 4 hours, but didn't put in 8 citations or included citations that they wrote during their regular shift (or did something else like put the time/date on the citation for an offense that may not have occurred during that shift and since they were warnings couldn't be tracked unless you actually spoke with the people who were alleged to have been pulled over).

My issue with the troopers is that they don't always have a lot of accountability. My understanding (and someone can correct me if I'm wrong), is that if their shift goes from 7-3, they don't have to actually be at the barracks for any time of roll call at 7. They simply have to have their radio on (which means they could just roll over in bed and turn it on) and are then responsible for any calls in their sector. They have to "check in" to their barracks once a shift instead of having a roll call.

The other issue with accountability is that they do not have a group of citizens to actually keep them in check. This can be an issue in larger cities as well, but besides the governor, who can you complain to?

Anyway, I'm guessing what these troopers did was something in between, and that is going to hard to check. How are you going to prove in court that the trooper wasn't actually trying to enforce the grant during the hours in question? If you can prove that they were not at work, charge them and fire them. If you can't prove that, it gets tricky.

No mention of the trooper

No mention of the trooper sent home drunk on the job or the other one which negligently discharged a personal firearm inside a bar? Not a good month for the MSP acting professional.

Which month was a good month?

Look out, Catholic Archdiocese of Boston. With all these recent scandals, the State Police are coming for your title of Most Corrupt Group In Massachusetts.

I'm starting to think that

I'm starting to think that you were conceived out of wedlock in the back seat of a mobile; it certainly would explain a lot.

No marriage for hundreds of thousands of years of evolution

How would circumstances of conception explain anything?

Apparently my comment touched on something for you. Are you a pedophile priest or a corrupt cop? Or just a big fan of those who are?

I'm not that anon

Since we know that I have no trouble calling you on your nonsense. That said, you do seem a bit obsessed with the Archdiocese of Boston, who have done a good job dealing with problems in the past decade or so. I mean, you have other obsessions, and I suppose that as long as you are also concerned with pedophiles preying on children in schools associated with the Episcopal Church and in other places, it would not be a bad obsession, but still, Bernie the Pimp was the first thing you thought of when you heard about troopers putting in for overtime they didn't work.

If you can't see the parallels in the corruption of people in organizations that assert that they have absolute and unquestioned authority and a penchant for dressing up and marching around, we can't help you.

Let me put it this way

I saw the parallels when a host of private schools were having troubles with pedophile teachers, but this is about government employees essentially stealing money.

Give me troopers being reassigned rather than fired when they break the law, we have a closer parallel. Since the head of the State Police announced this, I’m thinking Kinopio is just obsessed with the Catholic Church.

The Great and General court

Has to be in the top 3 in sleaze and corruption.

I'm sure there is some perfectly good explanation

Probably something like you would get from a teenager who was out late/not where they were supposed to be.

Must Be Nice, to get Salary, Detail, Overtime & Phantom Pay for not working !!! I Wonder If the State Trooper who was caught with racist rants on social media was a Quadruple Dipper ? Must Be Nice to pull in over $200,000, Thats Gangsterism

Suspension for stealing? I believe a Quincy sergeant went to Federal prison for stealing overtime. Charlie Baker's head must be spinning with all the scandals breaking out involving the troopers.

That’s true. The Feds only

That’s true. The Feds only got involved because some of the overtime was Click It Or Ticket, which is federally funded

The voters won't hold him accountable so, much like the T, why should he care?

I'm shocked that there was

I'm shocked that there was funny business with the 6-figure overtime hauls.

It would be nice for the Governor to speak out on all this misbehavior. Still no comment yet on Officer Genduso's situation.

second verse, same as the first

odd how this keeps happening. as if they somehow know that burying the media coverage means the public won't be arsed to remember or care...

If I was a resident of the Seaport, I would be extremely vocal in saying that I do not want the staties patrolling my neighborhood. It’s become increasingly clear that Boston Police are far superior to them, and if I ever had an emergency, I would much rather BPD respond than these people, who I am losing complete trust in.

And then there is the state

And then there is the state police stealing a ramp away from taxpayers and silver line riders in the seaport. They are terrible.
https://commonwealthmagazine.org/transportation/free-the-ramp/

At least we can feel safe

knowing we won't be short any troopers due to anyone getting fired.

What's with all the "stuff"?

What's with all the accoutrements among the State Police? (Why did they need a motorcycle behind the podium?) 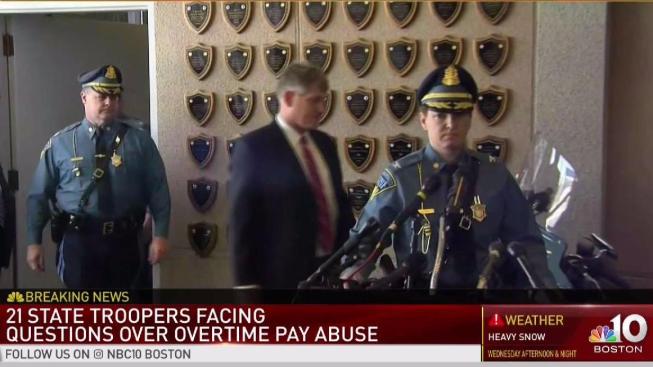 I wondered about the motorcycle, too. I hope someone has an answer!

But whyyyyy? A potted plant

But whyyyyy? A potted plant for decoration I can see. I can even understand the plaques. It's the motorcycle that's intriguing me.

They are modeled on military from their inception. But military like a military academy or military school, with lots of pieces of flair.