Curry College employee fired after investigation into series of anti-Semitic, racist and anti-LGBTQ scrawlings across campus

The Currier Times reports on the aftermath of an investigation into crap that kept showing up on campus earlier this year.

Somebody who parks in the Roslindale Village commuter-rail station reports coming home tonight to a flyer promoting hatred of Jews and "sodomites" for the most part, but also Communists, Muslims, feminists, the European Union and the Open Society Foundation (founded by George Soros, so Jews again). Read more. 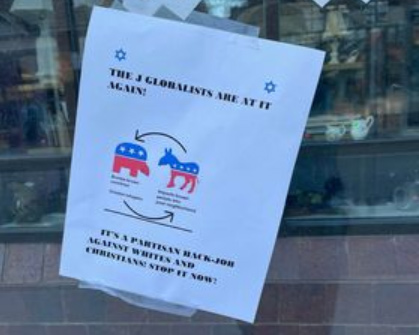 A Roslindale resident reports spending a minute this morning tearing down some anti-Semitic fliers posted at the Corinth Street bus stop in Roslindale Square.

They popped up a few days after a racist went around screaming about Asian-Americans, first at the city animal shelter on Mahler Road, then at the owner of a comedy club on Basile Street.

The city of Salem reported today that losers who think they know who's Jewish have been threatening city public-health officials and employees over Covid-19 efforts. Read more.

At Northeastern University, somebody vandalized a mezuzah at the entrance to the campus chapter of the Jewish organization Hillel, while at Tufts, two of the small cases, which contain parchment from the Torah and which are mounted at doorways, were stolen from dorms last month. Read more

Khaled Awad, 24, faces arraignment in Suffolk Superior Court tomorrow on a variety of charges including a formal hate-crime charge for a July 1 attack in which a rabbi was stabbed repeatedly outside his school on Chestnut Hill Avenue in Brighton, the Suffolk County District Attorney's office reports. Read more.

On his own live TV show this morning, an elected Lowell School Committee member felt the need to call a former administrator a "kike." The Jewish Journal has the story - and the video.

Feds: Antisemite tried burning down a Jewish nursing home but was foiled because he's a moron

MassLive.com reports the Jew-hating alleged idiot tried to burn down a nursing home in East Longmeadow earlier this month by using a Christian religious pamphlet as a wick to light a five-gallon canister filled with gasoline, only the pamphlet stopped burning before the canister could catch on fire, which let investigators use DNA from the blood he somehow dripped on the pamphlet to connect him to the canister.

Brookline Police report a judge yesterday issued a warrant for the man they say defaced the Chabad Center at 496 Harvard St. with antisemitic graffiti in Russian and a poor attempt at a swastika early Sunday - now they just have to find him. Read more.

And in the middle of all this, an anti-Semitic POS defaces a Jewish center in Brookline

Brookline Police report they are looking for a Russian-speaking choad who sprayed the Chabad Center, 496 Harvard St., with antisemitic graffiti - in Russian - and his failed attempted at a swastika around 1:40 a.m. on Sunday. Read more.

The Massachusetts Council of Churches and a number of individual ministers in Boston and Cambridge have issued a letter pledging to stand with Jews in the face of growing antisemitism, and calling on their parishioners to do the same. Read more.

The Globe reports. The owner of the proposed shop is converting to Judaism; the landlord is Jewish.

Marblehead Police report somebody posted the fliers on the entrance to Temple Emanu-El on Atlantic Avenue sometime over the weekend, and that they are looking for any tips from people who might have seen something. Read more.

Chanie Krinsky, who runs the Needham Chabad center with her husband, Rabbi Mendy Krinsky, reports somebody tried to set their house on fire - not long after a second suspicious fire at a Chabad rabbi's home in Arlington: Read more.

You can't choose your neighbors, but you can try

Anti-Semitism is apparently alive and well in parts of the Commonwealth.

The Brockton Enterprise News reports that a family in Lakeville was harassed repeatedly over a period of years after they purchased property on Long Pond in 2005 and began working on an island, nearby.

According to the newspaper, the dispute was over who had the right to a path leading to a small beach area; the local homeowners association earlier sued to gain access.

"A swastika was painted on a garage, association members secretly took photos of the families and their young children, and repeatedly filed unfounded complaints with police on the two families," according to India L. Minchoff, lawyer for Scott J Hyman.

Just what he needed: A couple of drunken Irishmen in a bar yelling at him about Jews in Israel

Samuel Scott reads about an upswing in anti-Semitism in Great Britain, which reminds him of a recent incident in a Boston pub.