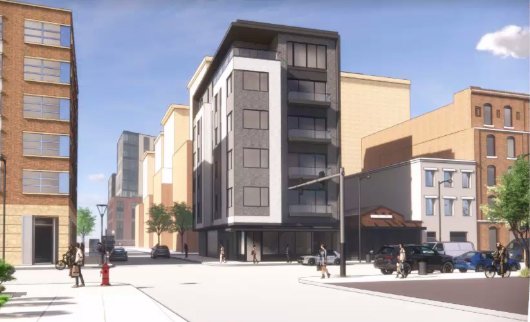 The Zoning Board of Appeal, getting a little fed up with nine-unit development proposals that skirt the city minimum for affordable housing, today told a developer who wants to put up a nine-unit building on Albany Street in the South End to try to shrink some of the units so that he can fit in at least one that could be rented or sold as affordable.

Andrew Brassard was before the board today seeking permission to replace the falling-apart former Baha'i center at 593 Albany St. at East Canton Street with a six-story, nine-unit residential building. Brassard needs board approval because the building would be taller than allowed by the lot's zoning, the proposed parking would be more difficult to maneuver in than allowed and would not have enough distance between it and the building to its rear. Also, while multi-family buildings are allowed, they are "conditional" - meaning the board has to formally approve them.

"These units seem very large and we're at 9 units," board member Joe Ruggiero said, wondering if Brassard had considered making any of the units smaller to accommodate at least one affordable unit.

Brassard's attorney, Marc Lacasse said that, all things considered, the units weren't really that large - because the one-bedroom units include space for a home office in the pandemic age.

Brassard added that because the site itself is so small, the lot is just 2,693 square feet, it would be difficult to fit in another another unit without cramping the shared space in the building, such as hallways and the elevator.

But board Chairwoman Christine Araujo told Brassard he needs to try, especially since the curb cut he wants would require removing at least one metered space on East Canton Street.

"In fact you're maximizing to the extent possible the use of the space the entire lot, end to end, and taking away X number of meters on East Canton and providing very little in return," she said.

She said she wanted Brassard to go back to the drawing board and see if he could shave some space off the one-bedroom units for a 10-unit design that would require him to set aside one unit as affordable - and then commit an additional amount to the BPDA affordable-housing fund.

In addition to the affordability issue, the Boston Transportation Department opposed Brassard's parking plans, urging the board to limit the number of cars in a proposed garage to five, saying the space was simply too small for seven cars.

The board agreed with Araujo to defer any action on the proposal until a meeting on March 8.

The rule that 9 units or less do not require an “affordable” unit results in lots of new development, that could have more units, capped at 9 to avoid building a below market rate unit. If the BPDA doesn’t like how their rules are being followed they should change them, instead of this process. This is like setting the speed limit on the highway and wondering why no one voluntarily goes slower that that.

But board Chairwoman Christine Araujo told Brassard he needs to try, especially since the curb cut he wants would require removing at least one metered space on East Canton Street.

"In fact you're maximizing to the extent possible the use of the space the entire lot, end to end, and taking away X number of meters on East Canton and providing very little in return," she said.

No matter the issue at hand, Chairwoman Araujo will bring it back to parking every single time without fail...

what a totally predictable outcome that absolutely everyone saw coming.

It won’t kill you, Brassard …

… to do the right thing.

I think it would be kinda cool to collect all the architectural renderings of proposed structures into a gallery called "Developer Fantasy Boston": a city where the skies are always clear, the streets are clean, there's never any traffic, and flocks of pedestrians and birds alike are happy to be out and about.

On the other hand it would be a pretty boring gallery.

One measly unit. All this

One measly unit. All this effort to produce one unit. We need a better approach.

If the minimum requirement is

If the minimum requirement is 10 and the board isn't ok with the developer putting in 9, then why don't they just make the minimum 9? This is the whole Chotchkie's flair thing all over again.

Oh, but developers have workaround for that

A building with 8 units.

The policies around "affordable" housing are foolish.

The board doesn't make the

The board doesn't make the policy; city councilor and mayor do often with a lot of constraints from the state legislature. This particular policy was enacted many years ago when housing affordability wasn't such a hot topic. It is now outdated and a change of rule is under serious consideration; I literally heard the mayor saying that yesterday and she's said it before. A number of councilors are also in favor and I would expect it to happen within a year.

In the meantime I think that the ZBA is making the right call by shaming those developers who -even though they may pretend otherwise- couldn't care less about the issue of equity. Their actions are speaking much louder than their words. Yes, these projects are expensive to develop but with real estate prices more than doubling over the past decade, they are still highly profitable. Even a small project like this one will likely generate well over $1 million in net profit. Mandating affordable units doesn't raise the price of the other units; they would sell to the highest bidder regardless. The main impact is that it may lower the price of the land slightly which is generally a good thing.

If in doubt, consider this recent case where a developer sold 14 units for over $10 millions while reporting a building cost of about $4 millions -soft cost typically adds about 30%. And even though he had committed to two affordable units, that dude still ended up selling all of his units at market rate.

A news item that doesn't bury the lede:

The Zoning Board of Appeal, getting a little fed up with nine-unit development proposals that skirt the city minimum for affordable housing

Holy crap, you mean government's attempts to arbitrarily pick numbers and make up rules led to someone responding perversely to an incentive?

Dumb governance: It's not just for wall-building advocates anymore.

We have a closet under the stairs.

How is it skirting?

That is goverment speak for following the rules. If they want every new building to have a low income reduced rate apartment, just say so.

Would hate to be the one

Would hate to be the one person in the affordable unit. I can imagine how that would go.

Cuz ya know, we can't have people who paid 1.2m for a 2 bedroom mingling with the people who applied for affordable housing and paid a fraction of that for the same layout & square footage. /snark

No seriously, thats the reason why.Not saying this will happen here or is that way in most of these buildings, but at a bare minimum these units are clustered near each other.

Developers are intentionally building these smaller buildings or large ones with ample space to separate out the units. If they can't, they skirt the requirement or pay their way out of it to 'build elsewhere" (and that's a seperate crock of sh*t in itself)

Thats why the whole thing needs to be scrapped and re written so developers can't do this and require more affordable units (or just towers of affordable units). We shouldn't victimize the poor or lower income by segregating them.

What stage of capitalism

Is it to build a segregated egress at any cost to block access to the sunk cost amenities?

It’s not capitalism of any kind

I’m decidedly not a fan of late stage capitalism but I feel compelled to point out that “capitalism” is not the correct term for an economic system in which the government tells a private property owner what units to build, who to sell them to, or what price to sell them at.

I support massive investment in affordable housing, but I don’t understand why, under the current system, the costs of this public good are expected to be borne by real estate developers as opposed to by all of us.

Separate entrances for the steerage class units in fancy new apartment buildings has been a thing in NYC for a long time. Personally I find it gross, but it’s not an entirely surprising response by luxury building developers to the affordable unit mandates.

The airport lounge is accessible from the terminal that we all use. They didn't build a secret entrance that got built into my plane tickets that aren't shelter and which I don't need to buy.

Also, "has been a thing for a long time" doesn't fly in debates with me. The developer has no chill and sucks on moral grounds for not letting the poors use the gym.

The parallel is there

Just as the developer spends money to build a separate entrance for the coach class apartments, the airline spends money on a staff member who does not serve drinks or food, or help with bags, or do anything at all for anybody other than to keep you and me out of the VIP lounge

Airplane travel is not a necessity, nor is living in a fancy neighborhood.

I agree with you that buildings with a separate poor entrance are disturbing; I wouldn’t want to live in one nor associate with the kind of neighbors who thought the idea was just fine. But that it exists as a response to perverse incentives shouldn’t surprise anybody

You would love the old Paris Metro, which has 1st class and 2nd class tickets (yes, for a subway ride!). And the 1st class cars were exactly like the 2nd class cars… in every detail, except that they had a “1” painted on the outside near each door.

They were usually less crowded though …

… so I sometimes snuck on one. All the while keeping an eye out for les contrôleurs.

Less crowded is the whole point

Paying a little extra to ride in a less crowded car is the entire point of buying the first class ticket. What makes the first class car more valuable is the fact that others are excluded from it.

Which is the same argument that developers make about limiting the pool and gym to the market rate apartments: to allow more people in (mic off, quiet aside, “especially those poor people, who probably smell bad and steal”) makes the amenities less valuable.

I’m really proud of my neighborhood for responding to a proposed large luxury building by firmly saying no to “build elsewhere” and insisting that the affordable units be built right here in our community. I think the developer and the public officials weren’t expecting that.