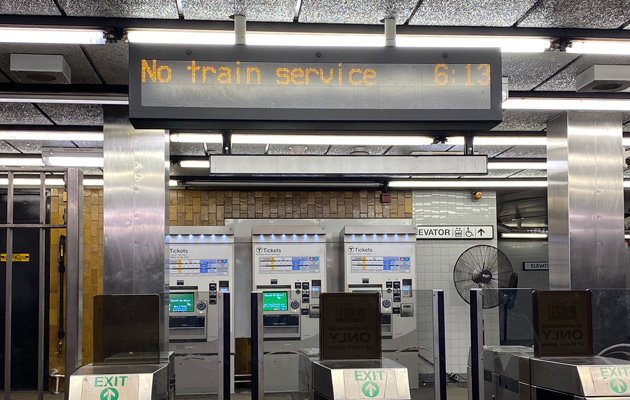 The T shut the Green and Orange Lines downtown again this evening after another "structural issue with the Government Center Garage."

Green Line service has been replaced by buses between Lechmere and Government Center. The Orange Line is shut between North Station and Back Bay, "until further notice," the T says.

Boston Police report portions of Congress Street, Surface Road, New Chardon Street and Sudbury Street will be shut to both motorists and pedestrians.

In a statement, the T said:

This afternoon, HYM Construction, the contractor demolishing the private Government Center Garage, advised the MBTA that the garage’s support columns that pass through MBTA tunnels near Haymarket station are severely deteriorated, creating an unsafe environment in the tunnel area for Green Line and Orange Line trains to operate through. The condition of these columns requires the suspension of Green Line and Orange Line rail service effective immediately in the tunnels beneath Haymarket station.

In March, the T had to do something similar after part of the garage collapsed, killing a construction worker, during work to take what's left of the garage down to make way for an office tower.

In their own statement, developers National Real Estate Advisors and The HYM Investment Group say the problem is unrelated to the garage demolition - and that just one column is involved:

A subsurface column in proximity to the Green and Orange Lines was identified as compromised from years of water damage. The condition of this column is unrelated to the demolition work at the Government Center Garage.

This service disruption as a result of HYM’s project is unacceptable and the MBTA will seek to hold HYM Construction accountable for all costs associated with this event. Riders’ safety is our top priority and unfortunately, as a result of this private party’s project, we must divert trains until the tunnels can be inspected and cleared by independent experts.

The latest garage woes are themselves the latest problems to beset the T this month. Other problems have included Green Line trolleys colliding and coupling, a runaway Red Line train, some scathing federal reports on T operations, cutbacks in Red, Orange and Blue Line service due to those reports and the need to pull all the new Orange Line trains after a battery in one of them exploded.

Silver Line to suspend service due to plague of locusts.

encouraged to avoid the E line.

It is summertime, so the iceberg broke up easily.

One can harken back to the first movie I ever rented for a VCR:

good that they closed it to

good that they closed it to prevent any further deaths.

Just in Time for Tourist Season

They'll all be raving to their friends back home about how easy it is getting around Boston.

showed up at back bay today

showed up at back bay today after work confused as hell why all the boards simply said “no train service.” As I was leaving to blue bike home instead, they started running oak grove trains, but not forest hills, which seems a bit odd given that they closed the tracks between back bay and north station.

Where did you hear they were running Oak Grove trains?

given the state of most

Old guy stomps even older guy in dispute over a bag at Park Street T stop, police say
Boston city councilor forced to play tour guide for befuddled Sox fans at Haymarket after T kicks them off the Green Line but doesn't tell them how to get to Fenway
The last of the storm moves out
Man stabbed in the neck near State and Congress downtown
New Hampshire man gets to fly his 'Christian' flag over City Hall Plaza tomorrow as City Council begins work to ensure he can never do so again
More trouble at old Government Center Garage site: Four-alarm fire