Three deckers back in vogue: Board approves two in Dorchester, rejects third that would sit behind an existing three decker 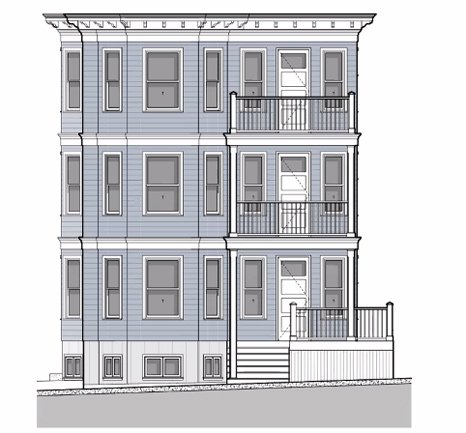 Rendering of proposed three decker at Church and Fifield streets.

The Zoning Board of Appeal today approved a new three deckers on what are now vacant lots on Church Street at Fifield Street and Fowler Street in Dorchester, but rejected one proposed to go behind an existing three decker on Homes Avenue.

The board unanimously approved a proposal by Sean George and Scott Kirkwood for a new three decker on a roughly 2,660-square-foot lot 16 Church St., where a three decker stood until the 1970s.

The new building, which their attorney, Ryan Spitz, called "a traditional-style three-family dwelling," would have two parking spaces off Fifield Street.

Board member Eric Robinson said the new structure, which required several variances, was consistent with other buildings in the area.

The board approved the proposal subject to review by BPDA designers; Robinson said he hoped that would include reducing the width of the curb cut for the parking spaces from 18 feet to something more pedestrian friendly. Typical driveway widths tend to be 10 or 12 feet.

Also winning board approval: A new three decker proposed by Neil Gulden at 15 Fowler St. on a roughly 4,200-square-foot lot.

Flaherty supported the proposal as well.

The board, however, rejected a proposal to build a three decker at 118R Homes Ave., behind 118 Homes Ave., saying its unusual location meant it did not deserve variances on a lot that was already too small for the two-family house it was zoned for.

Owner Anthony Monahan of Quincy said he wanted to do something with the roughly 4,500-square-foot landlocked lot, which, however, has an easement for the driveway that enters from Homes Avenue. At the request of the local neighborhood group, his plans showed six parking spaces.

Monahan said the neighborhood had some similar landlocked rear lots, but acknowledged that none had more than a two-family house on it.

A three-story, three-unit building for the relatively small lot zoned for a two-family house surrounded by other lots "seems excessive," board member Mark Erlich said.

The Boston Transportation Department proposed eliminating two of the parking spaces, saying otherwise there would not be enough room for maneuvering cars in and out of the spaces.

The board rejected the proposal without prejudice, which means Monahan could come back within the year with a proposal for a one- or two-family building.

why the hell do so many people care about the house next door?

Oh no! Their house is slightly bigger than the other houses and has less lawn space! You bought your house and nothing more.

Because no one wants to look

Because no one wants to look out their window into their neighbors window. you know...privacy! Zoning regulations exist for a reason. I'm sure you wouldn't like 20 new neighbors moving that close to you either.

I mean, they can already see into their neighbors windows

EDIT: And this is the exact style and density of housing I currently reside in living in Brighton. If I wanted privacy like you described, I'd be living in the burbs.

Some of us aren't trying to pull up the ladder behind us just because we found somewhere to live here.

I kinda agree with the ruling

I kinda agree with the ruling on this one. Its a tight spot... 1-2 floor building sure, like a small out building. But a triple decker, no. The lot is just too small.

Of course the six car argument doesnt work cuz the house next door has 7 in their driveway behind their house.

Looks like it would be built on the dilapidated garage.

Also 118 Homes Ave is a 3 story, not a 2 story. Still even more of a tight spot for another triple decker.

i do think it was a bad proposal

2 spots per unit half a mile from fields corner is ridiculous. Still not sure how a 4500 sqft lot is too tight for another triple decker, considering the same meeting approved triple deckers for a 2,660 and a 4,200 sqft lot.

With the caveat that I'm not a zoning-board member or any kind of zoning expert, just somebody who sat through all three of the hearings.

The Church Street proposal is in an area that's zoned for three-family homes, while Homes Avenue is zoned for two-family homes. So that's one strike against the Homes proposal right off the bat.

The Church Street site is surrounded by other three deckers. The current Homes Ave building is as well, but it's in a neighborhood with these unusual rear lots and none of those have three-family houses.

The Church Street site is on a corner, so no direct neighbors on two sides. In contrast, the Homes Avenue site is surrounded by four other properties, five if you include the existing three decker at 118 Homes.

Such a Boston statement

" the new structure, which required several variances, was consistent with other buildings in the area"

If it's consistent with other structures, why need a variance?

(The answer, of course, is every existing building violates its own existence - the city's way of forcing people to these boards for petty builds and changes. Gives the city ultimate control over everything...)

Legislature agrees to give Boston more liquor licenses, for the Bolling Building in Roxbury and the Strand Theatre in Dorchester
Stations on the Red Line's Ashmont branch falling apart again
Two shot near Lee School in Dorchester
Some soccer fans got up early for today's USA/Netherlands match
Visualizing some of the Boston area's Black neighborhoods - in textiles
The night the lights went out along Morrissey