On second try, with some parking added, plan to replace Roslindale repair garage with condos, stores is approved 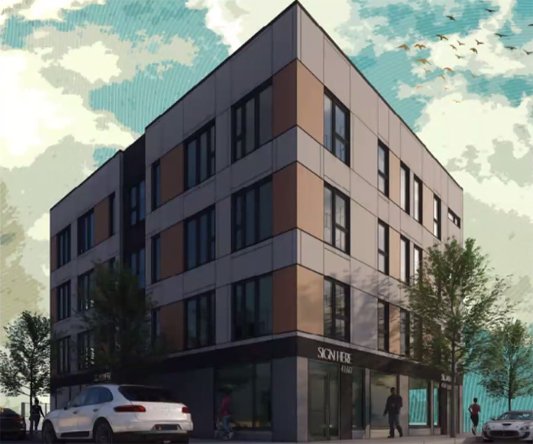 The Zoning Board of Appeal today approved Juan Chavez's latest plan to replace his Moreno collision shop with a four-story building with six condos and ground-floor commercial space - and four parking spaces.

Last July, the board rejected his first proposal for his 3,150-square-foot lot in part because it had no parking for residents.

The vote came despite a last-minute flurry of opposition letters from Roslindale Square merchants and customers, who said the proposal would exacerbate existing parking issues in the square, was too tall for the street and would cause traffic issues at the intersection of Washington Street and Bexley Road.

Chavez's attorney, Matt Fitzgerald, responded that the building is on the outskirts of the square and that it is about as transit-oriented as you can get - it's on multiple bus lines to and from Forest Hills and a quarter mile from the Roslindale Village commuter-rail stop, so he doubted all of the building's proposed residents would even have cars.

Two residents spoke against the proposal, calling it just too large for the neighborhood and a congestion generator for an already congested area.

Judith Kummer of Florence Street said the building is taller than the houses on Bexley Road and the businesses along that stretch of Washington Street. "At four stories, this proposed building would tower over the others in the area by at least two stories" and would become a precedent that could eventually make Washington Street "feel like a canyon," she said. She added that one of the reasons she moved to the area was specifically because it was low density.

The board voted 6-1 for the proposal.

Board Chairwoman Christine Araujo, who cast the lone no vote, said that the plan was "marginally better than the last proposal" because it included parking, but said it was still too big for the neighborhood.

As she has with other development proposals of late in both Roslindale Square and Nubian Square, Araujo said small business districts risk becoming choked in traffic as people hunt for a place to park - at least until "people just throw up their hands" and go someplace else.

She said the problem is compounded along the side of Washington Street the building will be on because of the morning bus lane that takes away all the parking between Roslindale Square and Forest Hills.

Fitzgerald, however, said that unlike in the heart of Roslindale Square, he has never had trouble finding a parking space near Chavez's current building, in the dozen or so times he's visited to go over the plans.

the ZBA, BTD, and MBTA could manage to work together.

Meanwhile, the ZBA is obsessed with parking (in part because of complaints from neighbors), which in turn fosters a reliance and focus on the "necessity" of private car transportation.. which could be relieved with more robust public transportation and pedestrian infrastructure, thereby making it more likely that appropriately-sized developments get approved.

development will never work for the residents of the city if the city doesn't approach it holistically.

Araujo really is a disaster

Why does she still have a position on this board? She does nothing but oppose progress and demand excessive parking.

The NIMBY arguments are as embarasing as they are desperate

Four stories will not "tower" over the 3 story buildings all over the neighborhood. And really, if the buildings on Bexley are 3 stories, then the buildings on Washington should be at least 4, or even 5 stories. I get the feeling a proposal for a one family ranch house on a parking lot would be opposed for not having enough parking and being too tall. Enough of this nonsense, we need housing!

What does Judith Kummer think…

Of the three-story Sumner, the four story Substation and the three story community center?

I’m just kidding, I don’t care what Judith Kummer thinks of those buildings or this one, and I’m glad that the ZBA doesn’t either. NIMBYs gonna NIMBY, and Judith Kummer is a NIMBY.

There's no sane reason why this project had to jump through so many hoops to be approved. It should be permitted by right and not subject to the ZBA.

Every single sensible project that increases housing in the city having to go through or around tinpot dictators like Araujo and co. is why housing is so scarce and so expensive.

Please. I for one want single

Please. I for one want single family zoning to go away.

on the bright side, that decision and others like it in Rozzie really helped push me into being pro-housing.

Disappointing that 1 year later we have lost one housing unit and 1 commercial space (maybe? I know the last proposal included two spaces), added 4 guaranteed cars to the neighborhood, and delayed Chavez’s retirement by a year.

Saw a nice tweet that said something along the lines of, if we never let the “neighborhood character” change, we’d still be living in mud huts. But, hey, at least those mud huts would leave plenty of room for off-street parking.

Watching the ZBA skunk its way around Roslindale has made me very pro-housing.

"...an already congested area..." Compared to what?

Shops and living area close to the commuter rail, bus lines, and a neighborhood center is EXACTLY the kind of development we should all encourage.

NOT having parking should almost be a requirement...

The personal animus and supporting thumbs up against a resident who had the courage to speak up at the ZBA meeting are deplorable. "Nimby" is a mindless accusation. To quote one pundit:


The term exists solely as political rhetoric to be wielded against those you see as less open-minded than yourself; its vagueness is inherent. By design, it’s an epithet to be hurled in the arena of politics. [Source:https://bastardurbanism.wordpress.com/2017/08/30/stop-saying-nimby/}

what do you call someone who

what do you call someone who votes against parking free projects all up and down Washington St in their own neighborhood, but approves parking-lite projects at 804 Hyde Park Ave in an arguably much less transit-rich and walkable location a bit further from home?

What do you suggest instead?

People who moved here first and claim dominion over the whole neighborhood at the expense of everyone else? (We’ll call them idk maybe “Colonists” for short.)

I can think of several words for her

But they are not suitable for polite conversation.

THey are really " I have my

THey are really " I have my house now, so no one else deserves a place to live."

Would you prefer "BANANA"?

"Build Absolutely Nothing Anywhere Near Anybody"? That might fit a little better with these loons, I guess.

If only Boston was surrounded my low density housing

There would be a place for these people to live, instead of taking up one of the precious few places in this country where we might build densely

She's honestly claiming that the bus lane, which is only in effect from 5-9am is a parking issue for the commercial district? The two busy commercial entities there in the morning are Dunks and Target which have.... off street parking!

I'm sure she is not dumb but she does model the behavior of an ignorant person sometimes...

I don't know about that

If they talk like an idiot, I'd put my money on being one. Either way - the track record is clear, Araujo has consistently has exhibited poor judgement in planning such that it's hard to consider her fit to continue serving. Has any one person done more to worsen the housing crisis in this city?

Want to live in a car-focused suburb? Great, go move to Westwood!

...prior to expiration of her term? (if so, it would seem to be a good idea).

My understanding is that she and most of the other ZBA members' terms have already expired.

Make Roslindale into a Super Block...

Eliminate parking... like the idea of "SuperBlocks" in Europe: https://citychangers.org/superblocks/

Board Chairwoman Christine Araujo, who cast the lone no vote, said that the plan was "marginally better than the last proposal" because it included parking, but said it was still too big for the neighborhood.

The worst problem with traffic in the square is that the busses have to mingle with car traffic on Corinth. The city could solve a lotttttt of traffic woes by taking a lane of parking and turning it into a bus lane. Jus saying. That would speed up a lot of traffic.

Of course the long term solution is the Orange Line Expansion but there's no appetite for that from the old school neighbors. Maybe some of the younger residents could get organized and start that, so that the stations will be built right as they retire.

She has been a real problem for development in Roslindale - pushing for parking in places that didn’t have it before - asserting her “aesthetic preferences” on buildings when ZBA has absolutely no jurisdiction on this particular issue. She’s overstayed her appointment and Wu needs to replace her ASAP.

Boston cop gets reduced probation sentence for scratchie tax fraud in exchange for cooperating with investigation into larger lottery scheme
Four Covid screamers detained outside mayor's house this morning
Roslindale man charged with threatening to murder police detective trying to clear up a dispute between the man and a former business partner
Some blockbuster clouds over Roslindale
Car riddled with bullets in gunfire in Roslindale; state troopers working US Open detail on West Roxbury Parkway stop driver
Police ran active-shooter drills outside schools, but not everybody was told they were only practice