Roslindale land that has long been on ice for sale; you'll need some cold hard cash, though 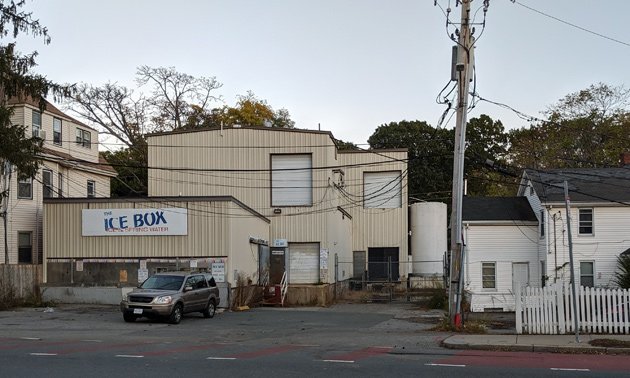 The Ice Box in its heyday, when you could buy both ice and bottled water.

An auction in November could mean a new owner for the shuttered Ice Box, 3890 Washington St., where generations of Bostonians went when they needed a lot of ice.

Falcucci Properties bought the roughly half-acre property, which also includes a single-family house, for $2.4 million in 2018. It promptly shut the ice and bottled-water business, then tried to sell the buildings and land for $6 million in 2019. A seller signed a purchase-and-sale agreement, but the deal fell through. Now Falcucci has hired JJ Manning Auctioneers to auction off the land on Nov. 16.

The former Ice Box building is on land zoned for light industrial uses.

ISD records show the Boston Ice Co. built a "retail ice sales station" at the location in 1928, back when refrigerators and freezers were just coming into vogue and people and companies still needed large amounts of ice.

Boston Ice, founded in 1866, originally harvested ice from Massachusetts ponds in the winter (it eventually bought the Jamaica Pond Ice Co.), and used a large fleet of horse-drawn carriages to deliver it as it grew through acquisition.

In 1877, in what became a precedent-setting contract case, the Supreme Judicial Court ruled that a Boston man who had grown dissatisfied with the company's ice delivery and switched to another company did not have to pay Boston Ice for the ice it delivered after it then bought that company and began delivering his ice again. The court ruled the man had no contract with Boston Ice for the new deliveries and so owed it nothing.

In 1901, the Supreme Judicial Court absolved the company of blame for injuries suffered by two young South End boys - 6 and 5 - when one of the company's ice-delivery men beat them with an ice-axe handle after one of them picked up the axe, which he had left unsecured on the sidewalk as he went to deliver some ice, and dropped it, causing it to break. The man testified he wanted to teach the young urchins a lesson; the court ruled that beating young children was not part of his normal job, so the company was not financially responsible.

In 1905, Boston Ice stopped serving Roslindale and West Roxbury "owing to the long distance it had to haul ice."

But by the 1920s, Boston Ice, then headquartered on State Street downtown, had begun to make its own ice, in several large plants around Boston, using electricity and ammonia to chill water enough to freeze it.

On May 31, 1928, the company got a building permit for its one-story ice store on Washington Street, near Forest Hills.

Over the decades, the store chugged along. Boston Ice eventually sold the facility. City records show the owner in 1958 as Kenney Ice and Fuel Co. and in 1966 as Northeast Petroleum Corp.

By 1986, Richard Lillis of Westwood had become its owner; in 1988, he got a building permit to add a two-story extension in the rear so he could make his own ice, rather than buying it from a supplier. In 1989, he added bottled water sales.

what’s the parcel zoned for?

Methinks that whoever is the developer will play nice with the abutting property owners, so be prepared to be disappointed.

Another perfectly good little house will be demolished. Sometimes I hate ‘progress’.

The house to the right of the property (looking from the street) is in rough shape. I walked by it tonight.

Sad to see industry going, but they ceased operations a while ago, so anything could be better than nothing.

It's half a mile from Forest

It's half a mile from Forest Hills. That's pushing the limits of walkability for many people. Closer frequent and reliable transit service, and everyday retail, are necessary if you want to consider it a pedestrian-oriented development.

Washington St from the square to forest hills should be treated as BRT. There are 8 buses scheduled to stop 300 ft away in the next hour. the lowest frequency gets is 4 per hour after midnight. There are 12! buses per hour during rush hour. There are dedicated bus lanes (which should certainly be better enforced). I see no reason why we shouldn’t be treating it like the rapid transit corridor that it is. Instead we have a ZBA that is aghast at the possibility a building could be taller than 3 stories and not require parking along it.

In 1901, the Supreme Judicial Court absolved the company of blame... The man testified he wanted to teach the young urchins a lesson; the court ruled that beating young children was not part of his normal job, so the company was not financially responsible.

Today it would be highly surprising if a company wasn't held partially responsible for similar actions of one of their employees while on company time.

Was the City of Boston or BPS held accountable for Rev Harrison?

Was the city sued?

If so, what was the outcome?

Yes, and not good, at least not for the victim

BPS owes nothing to English High student who was shot in the back of the head by his drug-dealing Latin Kings school counselor, judge rules.

Suing the city or BPS is

Suing the city or BPS is quite different from suing a private corporation. There is a higher bar to prove liability of a municipality in respondeat superior case like this.

Two sites right are across Wash. are being developed too.

Methinks apartments are coming to this part of town.

I hate paying for ice

I have a device in my freezer that makes an unlimited amount of "free" ice. And yet, somehow, certain members of the family find the need, on hot sunny days, when a lot of people are coming over, to actually pay good money for frozen water. I wonder if the legal historians know of a divorce case where "buying damn ice" was cited as the cause of the breakup.

Getting upset over something trivial causes breakups.

Anyone with an icemaker knows that "not buying ice" when there is a heavy demand will cause you to run out of ice and/or your icemaker to prematurely fail.

I mean my freezer has an

I mean my freezer has an icemaker too but once you're talking a few pounds of ice it's going to take a while. Or I have to start making it a week ahead of time in the limited trays, dump those into a bucket or something in the freezer, and refill.

Sometimes a dollar for a bag of ice is worth it for time/effort saved when you're talking party levels of ice needed.

The Lillis family began selling ice back in the 50's with a coin operated box in west Roxbury next to Charles River Sports. Dick Lillis expanded the operation into a million dollar enterprise.

The Lillis’ always a hard

Maybe The Skating Club of Boston

Could move back to... Boston?

Have you seen their new rink.

This site and the lumber yard

Are both more valuable as mixed use with housing. The lumber yard should be on Hyde park ave since that street would be more conducive to deliveries.

If this owner was smart they would have gotten something permitted and then sold the land. It seems like they didn’t do anything, so whoever buys it next is going to have to spend a couple years going through permitting. That makes the land worth not as much.

Back in the 1960s we had an icebox on the top floor of 1 Dayton Avenue. I think the iceman cameth twice a week. I'm not sure which location supplied the ice but it was from Boston Ice.

The Roslindale location was the go to place to fill up the cooler for picnics at Houghton's Pond. The 1960s were a simpler time although just as turbulent as today.