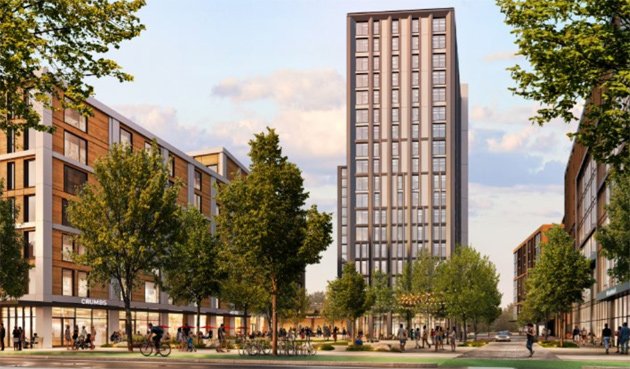 The Davis Companies have filed plans with the BPDA to replace the old Boston Skating Club and a low-rise hotel on Soldiers Field Road in Allston with a four-building complex that would include 435 apartments in an 18-story tower, 93 condos, a 195-bed hotel, a 200-person entertainment hall and retail space.

The developer first began talking publicly about the 3-acre project in 2020, with plans that initially called for more resident units and hotel rooms. It paid the Skating Club of Boston a total of $40.5 million in 2017 and 2018 for the two parcels that make up the site, which let the club build a new skating facility in Norwood.

In addition to the 18-story apartment building, the developer has proposed an 11-story hotel, a 10-story condo building and an 8-story building that would house a mix of apartments and condos.

The taller of the two apartment buildings would be topped with an "amenity deck."

Some 36 of the residential units would have three bedrooms, with the rest a mix of studios and one- and two-bedroom units.

In total, that's about 15% of the project's residential units, compared to the 13% required by the city. The developer says it is working with two non-profit groups - the Allston Brighton Community Development Corp. and The Community Builders to actually build and maintain the eight-story building that would house all of the affordable units.

The proposal calls for about 385 parking spaces.

The filing says much of the site would be open to the public, in part through a new road between Western Avenue and Soldiers Field Road:

Around half of the Project Site will be used to provide approximately 69,000 sf of open space and public realm improvements. The space will be comprised of planted and pedestrian areas, new or improved sidewalks and protected bicycle lanes, and a new site drive between Western Avenue and Soldiers Field Road (Site Drive). The Project Site design includes a prominent, south-facing courtyard (Western Avenue courtyard) that will provide options for leisure and recreational uses, complementing Allston’s existing open spaces such as Smith Field, Artesani Park, and Christian Herter Park. Much of the open space at the Project Site will be designed to host programming for a variety of events and uses and the courtyard area will contain supporting electrical infrastructure for such programs and events. The major new open space will front on Western Avenue and will be adjacent to ground floor retail spaces that will be marketed to operators who could provide complementary goods and services.

View from another side:

Good, now can we get a proper

Good, now can we get a proper bike/ped crossing of SFPR maybe...

Decided to stop at IHOP while biking with kids back from an event in Waltham. Holy god is that interchange ridiculous.

A swimming pool added to that design.