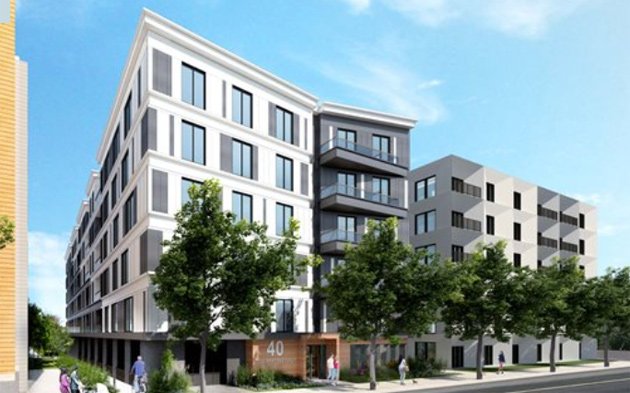 The Zoning Board of Appeal yesterday approved developer Jeffrey Feuerman's plans for a 61-unit apartment building on Soldiers Field Place, a dead end off Soldiers Field Road that is transforming from a warren of small nondescript office buildings into a residential area.

Feuerman's six-story Sigmund will fit between two other apartment buildings approved in recent years by the board. The developer of one of them sued after the board granted the developer of the other the same variances it had gotten, but it agreed to drop the suit this past spring.

However, the court-going developer filed an objection with the board over Feuerman's proposal, citing parking issues on the tiny street, where Feuerman's tenants would enter a garage with 49 spaces.

At a hearing yesterday, Feuerman's attorney, Joe Hanley, said ten of the apartments would be rented as affordable, rather than the eight required by the city. The building, which will have only one- and two-bedroom apartments - some of the latter "extremely large," Hanley said - will also have a room set aside as a child's play area.

Hanley added that the building would be "all electric" - no natural gas will be used for heating or cooking.

At the request of the Boston Transportation Department, the board's approval includes a requirement that 25% of the building's parking spaces be equipped for electric-vehicle charging - and that the remaining spaces be equipped with wiring that would let them have chargers added should the need arise.

The BPDA board approved the proposal in June.

City Councilor Liz Breadon (Allston/Brighton) supported the proposal. A man from Hyde Park Avenue in Jamaica Plain tried to speak on the project, but board Chairwoman Christine Araujo muted him in the Zoomed meeting, saying the board only wants to hear from people living near proposed projects. This came after the board had already held more than 20 hearings that started around 9:30, in a meeting that ended around 1 p.m.

I know right? Wait till you hear about Triple Deckers

Pretty boring design, but then again...

Odd for a public hearing

A man from Hyde Park Avenue in Jamaica Plain tried to speak on the project, but board Chairwoman Christine Araujo muted him in the Zoomed meeting, saying the board only wants to hear from people living near proposed projects.

Isn't it a bit odd, that in a public hearing, the Board decides who it wants to hear from and who it doesn't? It seems like all other public processes have a public comment period. Also seems arbitrary: what if he had been living in Allston - is that too far?

I looked at the ZBA's website and, if you want to speak, it looks like you put in your address and check off whether you 'support' or 'oppose' and the Board will invite you to speak. I would venture to say this tilts heavily in favor of people who live there already, over people who would want to shop at a proposed business or who would benefit from more housing generally.

You can just join the meeting with only your name and email. You raise your hand to speak and you are called on. For the record you do have to list your address once you are speaking but not before.

Hanley added that the

Hanley added that the building would be "all electric" - no natural gas will be used for heating or cooking.

Good first step but are there any requirements for solar power?? Like that is the whole reasoning behind the push for all electric - you electrify everything and then clean the grid. But if you don't incorporate clean energy in, then you're just moving the natural gas usage down the pipeline.

Solar on every house has some benefits but it'd be far more efficient to have regional solar hubs powering the grid with their own maintenance and cleaning. It's also a lot easier to replace all the power plants eventually than to have to rewire the house to handle electric appliances and possibly uproot all the gas lines later.

Not efficient for retrofits

Not efficient for retrofits but this is a brand new building. Just like making an old building airtight and energy efficient is really hard but if the city wanted they could hold these developers to standards for efficiency.

BC tells students they can't ride motorized scooters indoors
Six-story apartment building proposed for Western Avenue in Brighton, just around corner from all the other new apartments
Sign assigned to a sign
Brighton restaurant owner brings Venezuelan food down to the Cape for those Venezuelans who were trafficked here
Brighton's not big enough for two pizza daddies, suit charges
They're here!