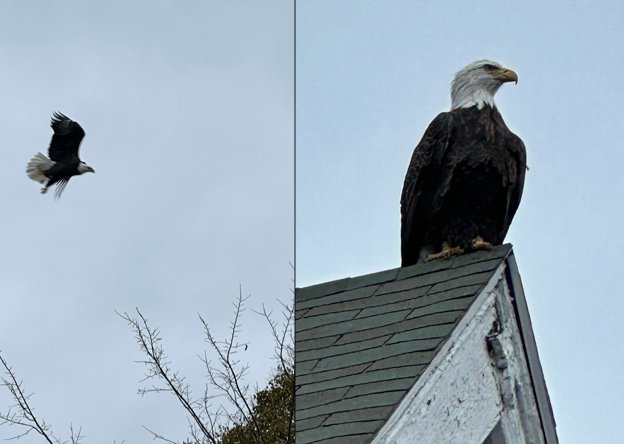 Patrick Knight forwarded a couple of photos his neighbor, Erin H., took of the bald eagle that landed in his backyard on Woodbridge Street in North Cambridge, near Davis Square, today.

"An anti-American eagle. It's diabolical."

Just in time to meet the

Just in time to meet the Prince and Princess of Wales

I saw one this weekend by Alewife

and I wonder if it's the same one!

There are several in the area

This may be the same one or may be one of the ones living on the Mystic Lakes and upper Mystic River.

One small step for eagle, one

One small step for eagle, one giant leap for Eaglekind!

Imperial Standard English irks us much.

DBNE what our moms HAD to understand to trade at Fields' Corner's only übermarket. No trade today: none dine at table this night.

only One of us was actually born Hier.

"Sloppy Nationalism" {Her term} is the oldest social disease yet present and abounding within bounds of The United Station o' America.

The 4th Variation auf Die O_Bus No. 19 ne'er ne'er e'er stop'd for Her at the Geneva Avenue stopz. White kids von Adams Village cannot be mixed with colored and Poor's! Her Mom started a school for her and friends coldly rebuff'd BLS MBTAque bij. The oldest secondary school in America had insidiously fail'd them and so many more. It rejects abl'd students deem'd statistically insignificant PREemptively and later colludes with MBTA to deny them further! Hooray! There's no butter AND no bus service when unsere vitality DEMANDS it.

One raucous + merry night in a speakeasy declar'd She: "You are the most Massachusetts person I know."

Our G-mas had to fight both KKK & NSDAP as Kinder undt teens.

K'aia + I sat with C.O.M.B.A.T. to fight Trumpism. True O.F.D. folk + volk ne'er ne'er e'er sit down, back and bij wenn The Avenue is fitna get burns and broke. Todas Aviendas at risk were. Many still are. That was 2016.

This is 2022. Thank you, Adam, for this post! this site! and your journalism! Stuff like this helps keep America together!

Aren't BIRD enough to take on the wild turkeys, are you Mr. Eagle?

But you'll go for cats, I'd bet, and steal fish from others along the Mystic and Charles.

Let's see you predate on pigeons at Sullivan Square, why don't you.
Red-tails can handle that, surely YOU can.

Saw one fly over Brighton

Saw one fly over Brighton yesterday. Crazy to see them make their home in the city.

Of course it isn't fair: Switch problems at Lechmere
Alewife station to remain shut through the week
Instant freeze - just add water
Alewife station shut after driver slams into garage wall, dislodging slab that sent large window panes hurtling into the passenger area
Police responded to a burning bush in Cambridge, but the bush did not speak to them and there was a guy standing next to it with a lighter
Protests, few answers at meeting on police shooting of Bangladeshi immigrant in Cambridge