Mayor, federal prosecutor vow to bring charges against Nazis for attack on man in Copley Square - once they can ID them 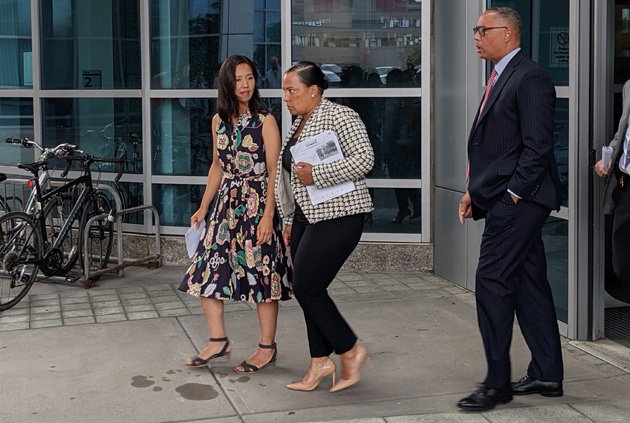 Mayor Wu and US Attorney Rachael Rollins vowed today to prosecute white supremacists they say attacked a gay, Black man who had the misfortune of walking onto Dartmouth Street just as they were marching to the Back Bay Orange Line stop for a ride out of town on Saturday.

Those responsible will be prosecuted to "the fullest extent of the law," Wu said at a press conference at Boston Police headquarters after a meeting with law-enforcement officials and members of the local Black and LGBTQ communities about Saturday's walking drum circle along the Freedom Trail and Copley Square by Patriot Front.

"We are working hard to make sure that if there are any federal charges we can bring or if there are any state charges that can be brought -- we will be looking at this," Rollins said. "We don't want to wait until there's violence. If there are threats we will charge those as well."

First, though, officials will have to identify the Patriot Front members who attacked Charles Murrell, since most wore balaclavas and sunglasses.

Acting Police Chief Gregory Long said that "a lot of video has been recorded" and that several BPD detectives and FBI agents are now reviewing that and other evidence. Rollins added that Transit and State Police are also working on the investigation. He said that no BPD officers witnessed the specific interaction between the khaki-clad Nazis and Murrell.

Activists have identified at least two Patriot Front members who were in Boston that day - its leader and another guy, both of whom were arrested in Idaho a couple weeks earlier.

Rollins said Boston has had three "separate and disturbing" instances of white supremacists trying to throw some weight around Boston this year - on Jan. 22, when they chanted outside Brigham and Women's about the hospital allegedly killing white babies, on March 20, when a local Nazi group showed up at the St. Patrick's parade in South Boston and Saturday's SA Lite march.

Wu and other officials said what made the Boston march different from what happened in Idaho was that law enforcement had no advance knowledge that the preening Nazis would be trying to cause any trouble. In Idaho, law enforcement was aware that the 31 Nazis with riot shields who popped out of a U-Haul truck were planning to disrupt Pride activities. In Boston, however, while the Nazis marched with similar shields - which they loaded into a U-Haul truck before entering the Back Bay T stop for the ride to their cars outside Oak Grove - law enforcement didn't have any such advance notice of potential trouble.

And that means that even if law enforcement knew they were coming - Wu said local officials didn't; Rollins didn't go quite that far, saying law enforcement does not always say everything it knows - without any threats, the group is covered by the First Amendment.

"In many cases, even ignorant, vile or repugnant hate speech can be at times covered by the First Amendment," Joseph Bonavolonta, special agent in charge of the Boston FBI office, said. That talk has to be paired with actual actions - or threats - for the feds to get involved, he said.

Still, "we know these threats are continuing to escalate across the country, and that Boston must be the leading light" in combating them, Wu said.

How about the shootings?

Is our mayor not concerned about the countless shootings over the weekend? Must not fit the narrative…

Perhaps it's you that sees only what they want to see?

On Monday, Mayor Michelle Wu decried the violence and said investigations are underway into each incident.

“My heart goes out to all the family members who were impacted by unnecessary and unacceptable violence in our city,” Wu said. “We are working every day to make sure that Boston is a city where everyone is supported, connected to opportunity and can ensure accountability for what happens.”

Whataboutism is for children.

Between the schools situation and violence uptick...

I'm still glad Michelle is in office vs Annissa, but she really needs to step up on both and more...

You miss a lot when you only use one news source

Must not fit your narrative, anon...

1. Here's an article that includes her response:
https://www.boston.com/news/crime/2022/07/04/10-people-shot-boston-july-...
2. Boston police statistics say shootings and victims are down for the year.
https://static1.squarespace.com/static/5086f19ce4b0ad16ff15598d/t/62c357...
3. The Mayor and the police can work on more than one thing at a time.
4. The brown-pantsed Nazis are a terrorist group working to suppress the rights of others by intimidation.
5. Threats to democracy can have deadly results for those who are disenfranchised. None of this weekend's shootings were fatal and only one resulted in serious injury.
6. If you can't count all the shootings this weekend, try taking your mittens and socks off first.

“5. Threats to democracy can have deadly results for those who are disenfranchised. None of this weekend's shootings were fatal and only one resulted in serious injury.“

What are you even talking about? The shootings are fine because we have better medical treatment to prevent death? So it only matters when people die?

Nazis suck, obviously, but so do people going around shooting up neighborhoods. Why are you giving them a pass?

People like you do nothing to help the disenfranchised, especially those in areas with higher crime. You’re actually making many people less safe with your rhetoric.

What did the BRIC know and when did they know it?

Time to check on the federal information that is being received (or not) and processed by the Boston Regional Intelligence Center (BRIC.) This march was well-organized.

This group of neo-Nazi’s has long been identified as a domestic terrorist organization by the Southern Poverty Law Center and the the Anti-Defamation League (ADL.)

Time for Department of Homeland Security to step up the tracking of these terrorists and or improve the sharing of information with local authorities.

For Those FTP Out There

There are a lot of people out there who think the cops are bad. Just see the comments earlier today. A lot of well off raised people mad at the po-po in a pathetic version of The Wild One set in a Clover. Aw shucks.

Knowing the Acting Police Chief from his younger days, expect action on some Nazi heads getting schooled by the BPD in the not to distant future.

I’ll believe it when I see it.

Considering I once pointed out directly to the old commissioner that nazis were openly carrying on the common and they were not arrested but escorted out of town by the police, I’ll believe it when I see it. Until then my consistent experience is that cops and klan go hand in hand.

Boston begins setting up bus-only lanes for Orange Line shuttles
Charles Street turns into a lake and Public Garden Lagoon overflows its banks after water main pops at Charles and Boylston
Newbury Street to get a whole bunch of car-free Sundays
Yes, four of those weird helicopters just flew over Boston
Some Orange Line machinery that's been obsolete for years but is still plugged in and still kind of works
Moving-truck driver chooses backup of shame over truck haircut