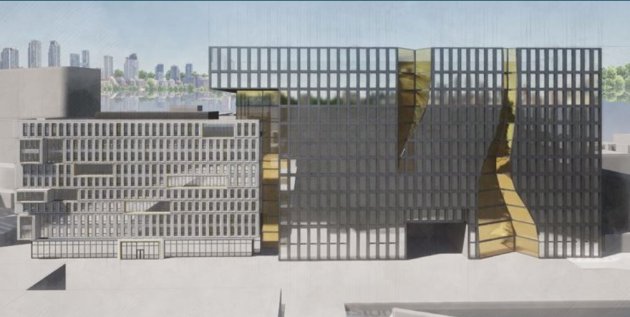 Rendering by The Architectural Team. See it larger.

A Miami developer has proposed a new complex over the Massachusetts Turnpike and a rarely used Hynes Green Line exit that would include a 12-story life-sciences wing, a 10-story wing with 125 affordable apartments, two new ADA-compliant T-stop entrances and a public bicycle "hub" with bike racks and lockers.

In a filing with the BPDA, the Peebles Corp. says the project, to be built under a 99-year lease from MassDOT, would go a long way towards boosting affordable housing in the Back Bay, which at 6% currently has one of the lowest percentages of affordable housing units in the city.

It would stretch from what is now the love locks fence on Massachusetts Avenue to where Boylston Street crosses over the turnpike.

"To limit traffic impacts, the project will not have any on-site parking," Peebles said, adding, however, that its project would include a "micro-mobility hub, consisting of over 100 public bicycle spaces with lockers open to the public."

The proposal calls for work to modernize the Hynes Green Line station:

The Hynes Convention Center T Station is the last Boston T Station that needs to be renovated to be fully accessible and ADA compliant. This project will include two MBTA T Station headhouses on the first floor. The first one, replacing the very old and outdated Hynes Convention Center T Station headhouse on Boylston Street and the second one on Mass Ave replacing the headhouse that is currently inside the footprint of the building on 360 Newbury Street. These two headhouses will not only be a focal point for local commuters that live in the surrounding neighborhoods, but they will also provide easy access to the subway green line for the residents of the new building above the two station headhouses.

Adam, would this fill in the dove entirely

All the way up to Mass Ave? Would be great connect the two sides of Boylsto

I thought it was already supposed to happen as a result of the project now under construction at this location?

yeah, i thought it was going

yeah, i thought it was going to be a hotel / affordable apartments aimed at college students. the building was going to be shaped like a music note as a nod to Berklee next door

if I recall right

If I recall right.. that project is currently underway. And its across the street (mass ave) from where this would be. That project (the one you describe) will be built over the old OB bus stop on the opposite side of Mass Ave from the entrance to Hynes.

That project included re-opening the pedestrian tunnel under Mass Ave to Hynes and adding an elevator to that side of the street (for the ped tunnel).

Not sure if it includes an additional elevator inside the faregates area, which wouldnt make a lot of sense if you're going to have an elevator to the fare lobby and not to the platform.

P12, which is on the west side of Mass Ave here, and is currently under construction, is rehabbing an existing walkway under Mass Ave that will create an accessible entrance from street level to the fare level of the station. This project, P13, which has been proposed and put off at least twice already (so I’ll believe it when I see it), is on the east side of Mass Ave and over the station. That project would create the accessible connection from the fare level to the track level (and at least one more accessible accessible connection from street level to fare level).

Symphony and Boylston too

Symphony and Boylston stations also need to be renovated to be fully accessible and ADA compliant.

Boylston is close enough to other stations

that it may not be necessary. Hynes is a major bus transfer point and much busier than Boylston.

Right, because people who need ADA compliance can all easily handle walking an extra few blocks on top of all the rest of their travel.

for either engineering or financial reasons, Hynes should be way above the other two in priority. It's an accessibility desert, a long way from Copley, Kenmore, or Mass Ave (Orange Line) stations.

I think why its been so slow on Hynes being done is because there's been so many starts and stops on the air rights over part of the station AND renovation projects that building that has TJMaxx in it.

I think the T may be waiting to see if private enterprise will pay for it. I mean I can't really blame them, they are at the wits end of the whoever owns the building and the air rights. If 70% of the work will reside in a building the T does not own or manage, let the developer pay for it. (most will anyways, as we see here)

And due to the fact to add the three elevators that will be needed (1 for each track and one from the fare collection lobby to the street), would require major reconfiguration of the building above (elevators require at least 1 floor ABOVE the top floor that the elevator services for machinery).

Remember the T would pay if they *request* they want to build elevator shafts from the building owner. The T would have to pay for everything, moving the above tenant, construction for the tenant above, etc etc. Vs if the developer pays.. they take care all of that. The T just has to provide access and coordination.

And considering how the T has little funds for this kind of work, I can see why they are dragging their feet.

Boylston's issue is that it is historic and sits very close.. almost under it... to a historic burial ground.

That station, unlike Park Street and Arlington, Boylston has never been renovated since it opened in 1897... with the exception of some new lighting in the 60s, CCTV, and safety/service related upgrades (think tracks/switches/barriers/alarms).

And that reason why is that it's historic.. it has to go thru much process to get it approved by the Park Service. It might even be in design right now as the T lost a lawsuit a while back concerning ADA compliance and that station... forcing them to do something.

But consider this FCB and the current state of the T, who knows when/if it will be done.

pretty soon theres gonna' be a k.f.c./taco-bell/life sciences lab proposed for the back bay.

I had to climb several flights of stairs I wasn't expecting a few days ago, because I'd forgotten that station isn;t accessible, not even close.

It doesn't help that the MBTA website doesn't distinguish between "inaccessible, several flights of stairs between platform and street" at Hynes and "inaccessible, there's no ramp from the platform to the train" at Dean Street.

Those not-quite-accessible street-running stations are usable for a lot of people who can't handle multiple flights of stairs.

No escalators at Hynes either

if I recall correctly. Escalators alone won't make a station ADA compliant, but they can make it more usable for people whose disability is not serious enough to require a wheelchair. Also, speaking from personal experience with a leg injury, sometimes a DOWN escalator is more necessary than an up escalator.

People think something is "accessible" (person using wheelchair can enter it independently without transferring from their chair) or isn't (they can't).

Good accessibility assessment and communication means having signage and documentation letting people know if there's an escalator, stairs, how many, how wide, what type and height of railings, etc. Oh, and for places with a restroom, what accessibility features the restroom has. And that's just for mobility -- other disabled folks also need to know what type of signage is available, what type of staff assistance is available, noise levels, all sorts of things.

They should call it

Absolutely hideous and therefore I’m sure
it will be approved.

If Boston City Hall and Cambridge's EF building had a baby.

I really hope the street wall isn't just empty windows... how about some retail.

That said, it'll be nice to have anything other than the highway chasm.

The left side of this building reminds me of that god awful ugly MIT Dorm on Vassar that you can see for miles.

Can we please NOT do this crap? We end up with buildings in 30 years that look like Pru because they are so dated looking. This will be dated looking in a few decades.

Not a huge fan of the Hancock tower design, but the sleek, window paned look is somewhat timeless. Built in 76, looks to be from 86, but could be from 96. Can't say that about the Pru.

Just because you can build something doesn't mean you should build it. A design like this is interesting for maybe a minute, and then it becomes permanent visual clutter.

The gash in the side of the

The gash in the side of the lab building reminds me of the EF building in Cambridge. That could become a bit of a local vernacular: Boston, where our buildings look like they've survived a hatchet attack! Could be worse.

Now couple that with...

at a landmark corner of the city

should not be allowed until the design is improved

shame on them for even putting it forward

Yeah, that land mark corner that is currently the Mass Pike. That said I don't good l see this moving forward in a million years (like Peddles previous hotel and other projects).

Looks cool, tons of new affordable housing, more accessibility. All huge plusses. Hopefully this is what we get

Let's see what happens with the public bike lockers though. Can they keep them open or will they become storage lockers?

Isn't that one of those "certain point of view" things - where it might actually have been less used than other entrances or other stations, but really became "rarely used" because it was rarely unlocked?

I've lived in Boston all my

I've lived in Boston all my life and I have never seen that entrance/exit used. Heck. I never even knew there was an exit on that side.

We are talking about the side which had the really long bus stop canopy right; Across from the old Tower Records store?

Someone did mention that one

Someone did mention that one - the existence of which I had completely forgotten. I don't know when it was last active - sounds like one that was most useful for a bus connection I hardly ever used.

I was talking about the the long side exit that comes out on Boylston, next to the restaurant and fire house. Maybe I had that wrong, and it was the one you were thinking of.

This is the one I was

This is the one I was thinking of (2019 Street view).
Interestingly, the 2013 Street view shows an "Entrance Closed" sign on that gate (and nothing on it since). I say "interestingly" because I was thinking about it earlier and had convinced myself it was an EXIT only - no token booth on that side, only exit turnstyles.
Though, again... I could easily be wrong.

Man charged with sexual attacks at Copley T stop
Man charged with calling in bomb threat that cleared Back Bay station
Back Bay 'supper club' gets OK for table bottle service after promising it's not turning into a nightclub
Back Bay getting almost late-night cookies
Sometimes the fog is calming and sometimes ...
Bike lanes on Mass. Ave. Bridge to become permanent