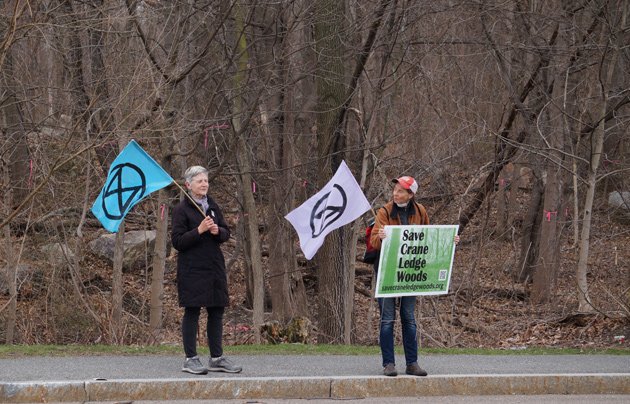 Two of the protesters in front of the woods along American Legion Highway.

About 75 residents gathered along American Legion Highway near the Walgreens to oppose a Texas developer's plans to carve away a big chunk of the hillside and ledge there for a complex with 270 apartments in nine low-slung buildings with 415 parking spaces.

The Lincoln Property Co. of Dallas filed its plans last June; the BPDA has yet to act on them.

What Lincoln wants to replace the woods and ledge with:

Residents say the 14-acre Crane Ledge site, currently owned by the Jubilee Christian Church, International, of Mattapan, is the largest remaining unspoiled piece of privately owned forested land in Boston and that Lincoln's plans to replace most of the trees with buildings, asphalt and "landscaping" is not just an affront to the environment, but would lead to increased flooding in the streets below the hillside.

The hill rises some 120 feet above the road and includes a long ledge near the top. After the sale, the church would still own a large piece of the hillside. Eversource owns a roughly 18-acre parcel at the top, the site of a former quarry and a driving range that the city never allowed to open.

Residents also argue all the new coverage of what is now a forest would exacerbate heat issues in the surrounding, heavily minority neighborhoods as climate change worsens.

Residents have suggested the city buy the land to preserve it; the church, however, has said it is selling to Lincoln no matter what.

More protesters stand in front of a formerly paved road up into the site, on which the church once planned to build its own subdivision:

Too much pavement for parking, fair enough - but build housing!

Sure, the amount of square footage devoted to paved parking seems excessive -- but it's not some suburban plaza monstrosity like next door (See Pg 18 here of the proposal).

I think there's a strong case to reduce the parking -- sure, if you build lots of parking, you'll get lots of cars, but there's no reason in the lifespan of this building we can't achieve workable transit that makes it easy to get the 2 mile straight shot to Forest Hills, or the even shorter trip to Mattapan Square (god hope we make the Mattapan line something viable) or the Fairmount line (~1.5 mi). It's not a locked-in fact that the ALH/HPA corridor is destined to be the car focused corridor it is today.

Sure, some units without parking won't be attractive to everyone, but that's ok! I guarantee there's a market rate at which they'll rent. Similarly, it does mean the developer won't be able to achieve maximum value - and that's also OK!

I don't see any argument they're presenting (too much pavement, losing trees) that we can't find a workaround for that's not "don't build housing" -- and not aggressively building more housing stock is the greater disservice in a city with one of the least affordable housing markets in the country.

Some people think every stand of woods is wilderness, and every tree is more important than new neighbors. And that any and all of their blatherings mean that they are addressing climate change because NATURE.

I've actually heard people try to argue that we have to have sprawl because houses close together heat up the planet. (ugh) So many unforced errors there.

As proposed, the development is gawdawful, but nothing less pavement and parking wouldn't fix.

It used to be all about the children - now it is all about "speaking for the trees", many of which are invasive species (visible!), and giving a vacant scrub lot some lyrical name that they think Thoreau might have liked (despite his fame for negligently burning down much of the timber in Concord).

Build it. The 8 people opposed to it are insane. The minority church that owns the land doesn’t seem concerned about heat islands. This is Hyde park not imNybuqn Square.

Don’t reduce parking or units either .

As resident of the neighborhood I for one oppose this monstrosity these people will tell you that they love God when in fact what they really love is money. I grew up going to church and with 100 or so of them that occupy space in the predominantly Black neighborhood, and that is a conservative estimate, what they do mostly is bury us after they’ve milked us dry. The majority of their membership no longer live in the neighborhood because they can afford to move out. I would much rather see an accredited vocational facility built there to teach both youth and adults alike how to earn a living wage as artisans and or entrepreneurs or some institution of higher learning, As a longtime resident of this community I would like to see these lovers of God follow Matthew 19: 21 because that would be both a true manifestation and demonstration of the word of God, and with the creation of this type of work you would instead leave behind a legacy that would both honor God and earn you a return on your investment instead of just selling your soul to the highest bidder.

I'm from Texas. I lived in complexes like that for 20 years. They're the LAST thing we need! Those huge parking lots waste a lot of space that could be used for more housing.

the last thing we need

Is excuses not to build more housing.

There's a missing "plans" between "protest" and "to turn" in the headline.

What Is That Symbol On The Flags?

Is there a Bobo Fascist group out protesting this?

PS - The Globe story on this development has a guy from Dot saying he played in "Minot Park". There is no such thing as Minot Park. There was a pile of rocks behind an electrician's building off Minot Street about 10 houses east of Carruth Street that was about the size of two house lots that now has a small apartment building on it. I guess people will lie through their teeth to get their point across.

If anything is leading to extinction, it is demands for sprawl.

Too many! Too much! That’s what I’m struck by looking at this space on the Satellite view: this 14 acre forest is dwarfed by the cemeteries to the north. (Then another several dozen acres over on the west side of westie.)

You do realize that these burial places were there a long time before the houses came in, right? They were rural farms, as was the Arboretum, Franklin Park, Mount Hope Cem., New Calvary Cem, etc. which were purchased for non-agricultural use or to house what was then considered to be insane people.

Housing was built here, roughly after 1910, mostly after 1920, in most of the area by "greedy developers" that everyone appears to rail against, well after the other tracts were purchased for the dead.

I mean, if you are so concerned, knock your house and turn the lot into an urban wild. That's show 'em.

According to a 1978 archaeological survey (PDF link), at least part of the Crane's Ledge site was used as a quarry by the Massachuset or their predecessors.

One natural talus slope with prehistoric materials was located and surface collected. We found considerable debitage and signs of prehistoric quarrying at the white felsite outcroppings. Among our recoveries here was a full-grooved axe, made of hornfelized
Braintree slate and presumably used in quarrying.

It appears to be a sister site to the recently protected quarry site in Mattapan.

We also found a small number of exotic flakes of Blue Hills aporhyolite and a red banded aporhyolite from another quarry about a mile from Sally Rock.

I hope the portions of the site with significant cultural importance are protected... although it looks to be mostly at the base of the cliffs, and the buildings will be built at the top, so maybe it's a non issue.

Closed Cleary Square bridge could be re-opened this fall
Young teen shot on Wood Avenue in Hyde Park; second teen shooting there in seven months
They rule the roost
Two charged for October murder near Ross Playground in Hyde Park; one was once charged for gang murder for which his brother pleaded guilty
New York firm buys Hyde Park mall with room for expansion
Citizen complaint of the day: Basketball hoops don't spray water