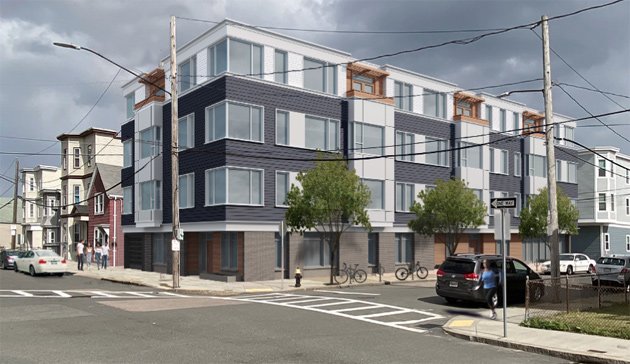 Rendering of the larger building by J. Garland Enterprises.

The Zoning Board of Appeal today approved plans by developers for two new residential buildings, with a total of 29 units, to replace what is now a flooring concern, along Curtis and Saratoga streets in East Boston.

The larger of the two buildings, at Curtis and Chaucer streets, right off Rte. 1A, would have 23 residential units and 17 parking spaces. A smaller, six-unit building, looking more like a triple decker, would be behind that lot on Saratoga Street. In total, the buildings would have four affordable units.

Acting board Chairman Mark Erlich said the larger building "seems like it;s pretty much bigger than anything around" in the surrounding area. Jonathan Garland, architect for developers Seth Williams and Jim Grossman, said the intent was to "bookend" the corner and that the change in architectural styling at the third floor of the building would help the building fit in with its three-story neighbors. Their attorney, Matt Eckel, noted that the building fronts on a highway on roughly one and a half sides, so there are no neighbors there at all that might be affected.

Board members Joe Ruggiero and Eric Robinson expressed some concern about the relative paucity of landscaping or greenspacing, especially along the front of the building. Before construction plans are filed, the BPDA will conduct a "design review" of the buildings.

The board then voted 5-0 to approve the proposal.

last I looked, zoning covered amount of space in a lot that wasn't built on, NOT shit like landscaping, how much of that unbuilt space is actual grass, etc. this board is a goddamn joke of overreach and nitpicking. boohoo there's no planters with small bushes that are going to be dead within two months of the last unit going. how about requiring solar or a green roof instead, since that makes a measurable impact on the world?

Adam, are these condos or apartments or unspecified?

Note the board approved the project

But also note the board often asks about a project's context - how it fits in with the surrounding block or neighborhood. You're right - that might not have any bearing on an actual vote, but new buildings they approve generally then go to the BPDA for "design review," so they're basically making suggestions to the designers there.

Based on the developers' initial filing, the larger building will be apartments, the smaller one condos.

Areas where there is little green land cover are areas that store heat. They heat up faster during the day and they retain that heat at night.

Areas that store heat are known as "heat islands", and this stored heat is linked to some nasty health outcomes for the people who live there, high energy bills for cooling, stress on electric infrastructure, etc.

is spelled out in the filing documents linked in the article.