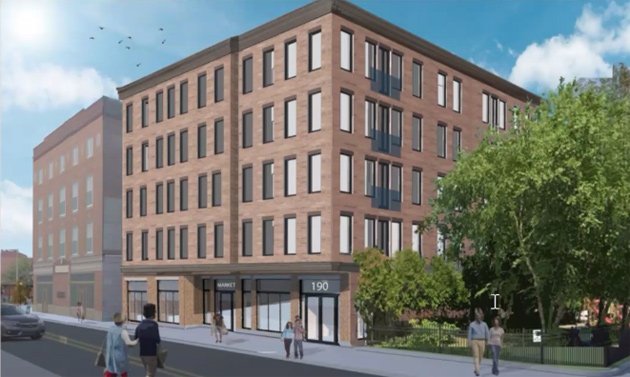 The Zoning Board of Appeal today approved a proposed 24-unit apartment building next to Hibernian Hall on Dudley Street that now features three three-bedroom units, several months after it rejected the proposal for lack of any family apartments.

Mohammad Masud and Rina Akter plan to raze the one-floor building that now sit there and replace them with a five-story building with room for a ground-floor convenience store.

In August, the board actually voted to approve their proposed 28-unit building by 4-1, but state law requires at least 5 votes for a project to proceed. The board normally has seven members, but only five were present that day. Board Chairwoman Christine Araujo cast the dissenting vote because the proposal did not include any three-bedroom units in a neighborhood she said was in desperate need of family housing.

Masud and Atker's attorney, Patrick Mahoney, said they added the requested units by reducing the overall number of apartments from 28 to 24 - which means the building's exterior dimensions remain the same. He added they agreed to stick to their original proposal of renting four units as affordable, including one of the three-bedroom units.

Despite the addition of family units, however, Araujo again voted against the proposal, this time because the building has no on-site parking, in a neighborhood she said will soon face a "crunch" because so many projects are being proposed there with no parking.

Mahoney said the developers have an agreement with the owner of a lot on the other side of Zeigler Street to provide up to 20 spaces for residents, but after he said the agreement is for just three years, Araujo said that means residents could be forced into on-street competition with residents and customers of all the other developments in the area that would be coming online by then - a concern she has raised before.

Unlike in August, however, her no vote did not block the project because six members were present for the hearing, and the other five voted in favor. The board had seven members on its Zoom call today, but member Joe Ruggiero recused himself.

Despite the addition of family units, however, Araujo again voted against the proposal, this time because the building has no on-site parking, in a neighborhood she said will soon face a "crunch" because so many projects are being proposed there with no parking.

At some point, Mayor Wu is going to replace the chairwoman of the ZBA that actively works against her agenda and that of the overwhelming majority of voters that elected her, right?

THIS. Except for the

THIS. Except for the affordable one which actually is pretty hard to scam if you don't actually have kids, the problem in this city isn't lack of big units - entire neighborhoods are filled with triple decker after triple decker, with three family sized units in each. The problem is there's no SMALLER, CHEAPER units to outcompete the appeal of splitting your rent 3-4 ways with your frat bros and girlfriend. All the 1-beds and studios that have come online in the past few years are high priced and aren't actually going to pull anyone out of those precious family units, and families who don't have the benefit of all household members bringing an income cannot compete.

Night of burst pipes across Boston: Hospitals, theater, mall all hit
Boston to get a 24-hour Panera
Part of Blue Hill Avenue in Roxbury shut due to gas leak
Franklin Institute changes name to also honor a more recent donor
Police say guy had a gun loaded with 33 bullets when they came looking for him in Roxbury
Orange Line passengers need to wear raincoats these days