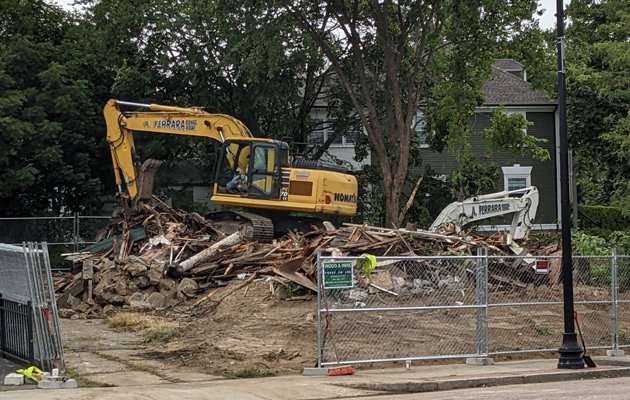 The remains of the house.

A contractor for local developer Gary Martell's CAD Builders this morning tore down the Greek-revival Keith House on Centre Street to make way for a 21-unit condo building - assuming the project is approved by the BPDA - just two days after ISD issue a demolition permit.

The house, which in its later years was a realty office and then just a mouldering hulk open to the elements, animals and curious people, was built in 1839 as a home for William Keith, who also used the house as a post office. Keith served more than 50 years as the postmaster for what started out as the more rural end of the town of Roxbury. Keith, who also sold groceries in addition to stamps, was also a stationmaster for the Boston & Providence Railroad.

Residents, led in part by Jim Hennigan, whose insurance office is next door, had fought Martell's proposal, saying the house in particular should be preserved, possibly as a community center, but that even the round little concrete pillbox that had been home to the former People's Federal Savings Bank, which Martell also plans to demolish, had some value as an example of early brutalist architecture.

Martell said fine - as long as the city gave him the municipal parking lot at Corey and Railroad streets in exchange so he could still put up his condos. The city did not.

On March 22, the Boston Landmarks Commission issued a 90-day stay on any demolition pending a review of the Keith House's historic merits. That ran out June 22.

ISD issued Martell's contractor a demolition permit around 2 p.m. on Tuesday and a crew showed up this morning with a backhoe and other equipment to take the house down.

Martell initially filed plans with the BPDA for condos on Feb. 8, 2021. The agency, which sat on plans for a proposed charter school on Belgrade Avenue at West Roxbury Parkway for more than two years in the face of major opposition from neighbors, has yet to make a determination on the Martell proposal.

Then (April photo by Boston Landmarks Commission, showing both house and bank building):

the extant residents were able to vacate prior.

You’re supposed to put an /s after a comment that’s this dry.

I love to see it

It's not beautiful. I'm glad

It's not beautiful. I'm glad housing is being built but once again it's a bland building that looks exactly like everything else being built. Though I guess bland and WR have always gone together so there's that...

Why would anyone want that

Why would anyone want that ugly, neglected, decomposing squatter, rat, and fire magnet in Their Back Yard????? Glad to see it go!!!

That building was its own

That building was its own gruesome gash on the area. That area needs more housing, not faux-historic decrepit buildings full of NIMBYs.

Because its not as progressive and bike friendly as they think it should be. Also, it still has a lot of families which are actually from Boston.

If the Landmarks Commission

If the Landmarks Commission recommended saving it, why didn't they stop the demolition long enough to make their final decision?

Honestly, I don't see how this is a landmark, but if the Landmarks Commission can rule that there is potential for it being a Historic Landmark yet it was allowed to be torn down, what's the sense of them doing anything?

TLDR: the postman who 150 years ago delivered many important letters to many esteemed people (so esteemed that they’re not named, except for his daddy) once lived there, so we’d rather have this decrepit piece of shit than actual housing for actual people.

From about 1857 to 1888, the property at 1911 Centre St. served as the site of U.S. Postal Service operations in West Roxbury. This was the home of William S. Keith, whose tenure as postmaster began with his appointment in 1836 by President Andrew Jackson and ended 52 years later upon his death. As postmaster, Keith was responsible for handling all mail sent and received by West Roxbury’s inhabitants, including residents and business proprietors. Among those who relied upon Keith’s efforts are a number of historically noteworthy personages who include religious figures, educators, active and retired Boston merchants (including the postmaster’s wealthy father, William Keith, Esq.), writers, intellectuals, social reformers, and abolitionists. Keith would have handled all their correspondence.

I can’t wait to see what the historical society says about Clay Chevy.

Let's not forget that circa

Let's not forget that circa 2018 a semi-important author* may have glanced at that Centre St house while on an epic shopping journey to Costco in Dedham. I think that I still have the store receipt to prove it.

* My influential writings occasionally get published in the Universal Hub comment section.

Funny thing about these Westie NIMBYs

Curious how they see things regarding Centre Street, you know in terms of preserving the historical layout of the road.

Way better transit in that

Way better transit in that area 118 years ago!

I know there are busses, but the commuter rail goes right through West Roxbury straight to South Station and only runs once per hour.

How many car ride or bus trips could be avoided if the Needham line ran trains every 20 minutes or so? Even if some of those trains only went between Needham Heights and Forest Hills, it would still be faster than busses along that route during rush hour (assuming the Orange line recovers).

It doesn’t look like a big loss - the old building doesn’t look all that remarkable for its time and it appears to be run down enough where it might not actually be salvageable. However, I think they should at least make a law that buildings that are torn down need to be replaced with something at least as architecturally significant and appropriately sized for the plot of land.

Judging but the architectural rendering, it is just a generic clone of the type of ugly and buildings going up and crowding neighborhoods in places like south Boston, Jp, etc.. Plus, it should be set back from the street more, at least. Objectively speaking, that new building is enough of an eyesore when new, but imagine what it will look like in 50 years!

"architecturally significant" Who defines that? Ian?

Sorry thats all in the eye of the beholder. And I think would be used as bad faith argument against projects, much like your "objective" claims that'll be an eyesore for the next 50 years.

I mean, there has to some people out there that think Triple Deckers are an ugly building typology, yeah?

EDIT: Also equally funny that these clowns tried to get the bank building protected as historically significant due to being in the brutalist style and yet our own City Hall can be derided by some for being ugly. So which is it?

No way anyone looks at that building and says otherwise.

Unless you are a fan of Brutalist architecture,

which I am. Pretty much every professional architect I know likes it, too. (The surrounding plaza is the real botch job.)

Did you not know?

That was originally inspired by Piazza del Campo in Siena. It was just shittily designed with no pedestrian scale architecture along the edges. No cafes or restaurants or other interesting gathering-type spaces. Just wide roads. Heck, we don't even get a church-based horse race where even if riderless a horse can win.

City hall has awful, poorly defined edges. It is an interesting building when viewed from afar, but it completely fails where it meets the street and the plaza. They were designed together, you have to evaluate them as one unit.

Professional architects might like it, but urban designers, landscape architects, and everyone else concerned about the public realm do not.

I'm having a hard time imagining how that building

fits on that lot. Do the walls go up to the property line on all sides?

Further pages show the rest of the floor plans

Not just the house lot

The building will also be on the Rockland Trust bank lot on the corner. (per the PDF ElizaLeila linked).

This building was in decent shape until Martell's guys made it look as ratty as possible in order to facilitate permission for the tear down. The name Boston Landmarks sounds like they would aid in preventing the loss of historic buildings, but actually their board is appointed by developers with a preference for bulldozing buildings with character.

That Building was Falling Apart Years Ago!

I was in that realty office over a decade ago conducting some business, and it should have been condemned then. There was no heat, holes in the floor, and it was a hazard just walking around. Karen Gilmore was still running her business in that death trap back them (and for many years thereafter). When I asked our realtor what was going on, he said that she had gotten divorced, and she fell on hard times, and she just let everything go. Jim Hennigan is a fool, and opposing the tear down of that blight on Centre Street was only so that he would not have to deal with the noise and construction next to his office, he does not give a flying you-know-what about the architectural significance of that property. Good for Gary! I have lived in West Roxbury for over 20 years, and I am fed up with all the NIBY bleep holes in this town!

Boohoohoo for an insurance salesman who doesn't want people living near his office or having to compete for the parking spot right in front of his door. If he was so passionate about turning a tiny decrepit house into a community center he could have raised the funds from the neighborhood and done it himself. Dude just didn't want it built. Who the hell has a physical insurance office in this day and age anyway, talk about poor use of land.

Sky prism over the Grove in West Roxbury
Former head of homeless-shelter concern gets year in jail for embezzling nearly $1.5 million
Heron in the mist
West Roxbury's one brutalist building being torn down
DA moves to seize money found after man who was already facing trial as a drug dealer was arrested on new drug charges in West Roxbury
Didn't claim your new buildable lot off Millennium Park? Too late