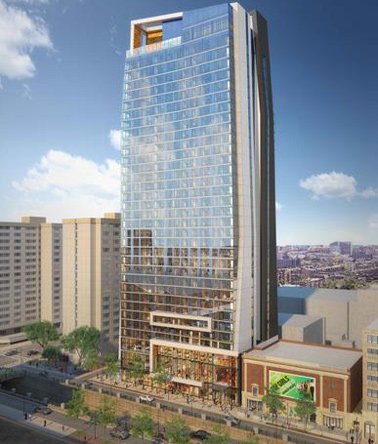 Rendering imagines the view as seen by a bird, or maybe a drone, hovering over Symphony Hall.

A developer that specializes in luxury subdivisions says it has secured a $226-million loan to build its first luxury apartment building in Boston - at 252-264 Huntington Ave., at Mass. Ave.

Toll Brothers of Fort Washington, PA, working with Prudential Financial's real-estate wing, is proposing a 34-story, 432-unit apartment building, with 56 apartments to be rented as affordable. The building, an "amenity-rich retreat from the hustle and bustle of downtown," would have a 66-space garage, along with a 24-hour concierge, a health club and a pet spa.

In a statement, Prudential Financial said the Boston rental market has strongly emerged from the pandemic.

The BPDA approved the proposal - which included keeping the BU Theatre and signing it over to the Huntington Theatre Co. for $1 - in 2017, then agreed to some changes in 2019.

Toll Brothers bought the rights to the project from the original developers in 2018, according to corporate records on file at the Secretary of State's office.

looks like a tower by someone who specializes in luxury subdivisions...

I'm half surprised that it doesn't have shiplap siding.

I get inundated by "active adult community" ads from these guys. The upsell never stops.

This "retreat" is in an area

This "retreat" is in an area every bit as hustling and bustling as downtown, and in fact by some definitions this is downtown, but I support it anyway. Would be nice to get some new, cheaper housing around here too though, if that's possible.

Calls this "downtown," but I couldn't do that, because it's on the other side of Back Bay from downtown and while it's true I will never fully grasp Boston neighborhood lines, even I have my limits.

The area was once called Uptown

or at least, there was an Uptown Theatre next to Horticultural Hall (torn down for the Christian Science Plaza), and also an Uptown Garage (which I think still exists with a different name).

I totally misread the press

I totally misread the press release. I thought they were saying this location is an alternative to downtown, but I see now they meant this is downtown and that's a bit silly since the site is outbound from the Midtown Hotel.

We already have a giant roll-on and a giant razor.

Giant stick deodorant now? Or is this one of those 3-in-1 body/hair washes for men?

It kinda reminds me of a lighter....

Reminds me of a mag

Of bullets to a gloc.

wow what a shower its so big.

wow what a shower its so big. wonder how itll look when its erected

1) The rendering has done away with the building at 250 Huntington, which currently houses the Ginger Exchange restaurant at ground level and a few apartments above.

This still occurs on very windy days, I've never heard about any response to the city, building owners, etc.

English High building has massive roof based fans that are part of the HVAC system. The fans, "upgraded" sometime after 1998, create a noise that is audible at the old English High building. The city staff responsible for this - at least under Marty Walsh, paid lip in dealing with complaints.

And for folks who knee jerk with "If you want quiet live in the country." My response always is, "If you like noise, join the circus."

Walking down Washington Street between Roxbury and JP reminded me that a major form of pollution that assaults Roxbury especially, are boom-boom cars. There was a car blasting Latin music so loudly that residents (I assume accept most of the boom-boom noise with fatalists) objected.

The high-pitched scraping noise at Symphony/Fenway started 4-5 years ago, around the time that a couple of different construction projects (student housing) finished.

If you walk through the Northeastern campus sometime you will encounter pockets of deafening HVAC noise, ironically in some of the most beautifully landscaped areas.

All that glass gonna make for a hot time in the hoods. The Xian Science apartment building is gonna be cookin!

Transformer wends way down the Fenway
Feel the dread: Green Line's dead
James Harold, owner of the Rat, dies, 79
Thank goodness for the 39 bus
Somebody at Fenway was a real asshole today
We imagine it sounded something like: SKEEERONNNCH