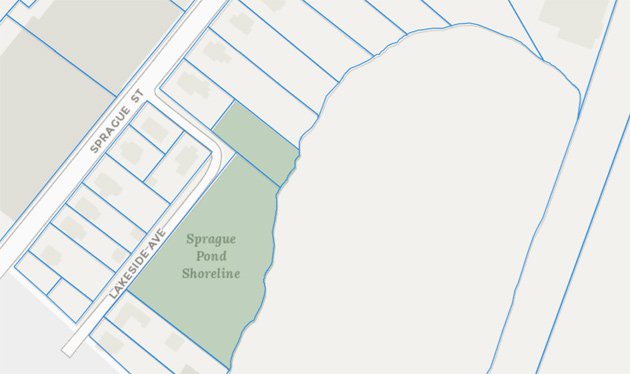 Mayor Wu is proposing to use the city's eminent-domain powers to buy an acre of land along the shore of Sprague Pond, a little known pond on the Hyde Park/Dedham line off Sprague Street that the state last fall designated as a "great pond" open to the public.

The only problem with the designation: Currently the only public access to the pond is a tiny strip of land currently used to store trucks. The pond has great views of the Great Blue Hill, is part of the land that once made up Camp Meigs, where the 54th Massachusetts trained, and is the final resting place of a locomotive that plunged into it in 1834.

A City Council committee will study the proposal to use eminent domain to take two parcels that wrap around a bend on Lakeside Avenue, between Sprague Street and McDonald Street in Dedham that two developers had once hoped to put three condos on.

A former owner of the two parcels had once maintained the land as a private park for Lakeside Avenue residents.

The mayor's proposal would authorize the Boston Parks and Recreation Commission to take the land and then pay "damages" for doing so, using funds from the city Community Preservation Act fund, the money for which comes from a surcharge on property taxes in Boston.

The proposal does not specify a possible takings price. The city currently assesses the land at $271,649. On March 1, the two developers paid $325,000 for the land on March 1, according to Suffolk County Registry of Deeds records. They have recently been advertising the land for sale.

The mayor's request details the reason for taking the land to create the Sprague Pond Shoreline Reserve:

These parcels on the western shore of Sprague Pond are undeveloped, contribute to the scenic beauty of and provide access to this Great Pond, provide natural resource protection to the state-designated Fowl Meadow and Ponkapoag Bog Area of Critical Environmental Concern, are within the boundaries of the Camp Miegs Civil War-era training camp and hospital, where the Massachusetts 54th and 55th Volunteer Regiments trained, and are within an area considered "archaeologically sensitive for ancient and historic period preservation, and archaeological sensitivity make this a particularly worthy acquisition to Boston's parkland, and provide a public good of profound significance to this City and the Commonwealth that justified the serious responsibility involved in the taking of private property with just compensation.

With official state recognition last fall, Sprague Pond become only Boston's second "great pond," after Jamaica Pond. A key consideration: Whether the pond is or once was at least 10 acres in sizes, the minimum required for "great pond" designation under state laws that date to the Colonial Ordinance of 1641-1647.

Complete request to authorize taking of the land.

to take the land and then pay

to take the land and then pay "damages" for doing so

Doesn't fit my definition of buy.

It's a pretty common practice...

...for a municipality to negotiate a sale price for a parcel on the market and then file an eminent domain taking in lieu of a quitclaim deed. This is done for the purpose of clearing the title, as eminent domain takings clear property titles of all encumbrances. In the 1970s, my father was on the conservation commission in my hometown when the Town was purchasing hundreds of acres of woods for conservation purposes and to build a reservoir. The Town negotiated the sale prices of dozens of parcels, paid the owners the agreed amount, and then took them by eminent domain so that it would own the properties free and clear of all title defects.

On Streetview this looks like very under-utilized land. Given that it abuts the pond, now is the time to lock it down so we all can, one day, enjoy it.

I'm all for more green space

I'm all for more green space for head space.

Can we have a college

Can we have a college roommate pay half of this, for nothing in return?

Not another beautification project

The city doesn’t need another park with a great pond.

We have real problems that need solutions. Problems like failing schools and an exiting superintendent, violent crime and no police commissioner, astronomically high rents and displaced individuals, mental health, drug addiction and homelessness on Mass and Cass.

Solve the real problems. This park is wasted effort.

Do you really think the landscape designers and arborists at Parks and Recreation are who we want tackling the opioid crisis?

Expanding parks and tackling a public health crisis are not mutually exclusive.

The Community Preservation Act is funded by property taxes, not property transaction fees. So all landowners contribute to it every year.

One minor correction to your correction, though: There are exemptions for people in general and seniors in particular making less than a certain amount depending on household size, so not all landowners pay it.

Man sought for attempted rape on Hyde Park Avenue in Hyde Park
State shuts Turtle Pond due to bacterial bloom that could kill dogs
Hyde Park man gets 32 months in federal prison for swindling senior ladies looking for love
The four-way race to replace Sonia Chang-Diaz in the state senate
Parakeets are not native to Readville, so this is probably somebody's pet
Will it blend? No, it won't, Hyde Park woman charges in blender suit