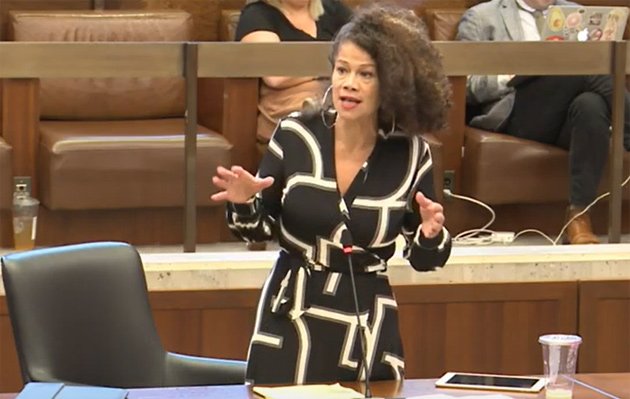 The City Council voted overwhelmingly today to fight to keep local control of BPS in the face of possible state receivership, saying a new mayor and a new superintendent deserve a chance to finally bring the sort of change BPS needs and that the last thing Boston - where voters strongly supported an elected school committee in the fall election - needs is an outside commissar screwing things up even more.

The state Department of Elementary and Secondary Education (DESE), which is considering making Boston its fourth school system in receivership, has a "miserable track record" in turning schools around, Councilor Julia Mejia, who sponsored the resolution, said. The three communities with schools run by the state - Lawrence, Holyoke and Southbridge - all remain among the state's worst performing districts and have shown little signs of permanent improvement, she said. She said fixing BPS will take work by parents, teachers and administrators, something she said they would be locked out of by a state appointed receiver.

Councilor Ruthzee Louijeune (at large), said the one Boston school already in state receivership - the Dever - "has almost nothing to show for that."

Councilor Ricardo Arroyo (Hyde Park, Mattapan, Roslindale) said Boston doesn't need somebody from away making decisions by fiat that affect Boston families. He said all the receivership talk is now hanging over the city even as it looks for a new superintendent to replace

Flaherty said he remains a strong supporter of BPS but that he could not vote for the resolution because it might be seen as a vote of confidence in BPS central administration, which he said is entirely to blame for everything that is wrong - and possibly even illegal - about the school system today. He said central administration has screwed up student transportation, has failed to ensure that English-learning and special-education students get the resources they need, is overseeing schools that aren't safe and has failed to even develop a tracking system to monitor how it responds to parent requests.

He said that perhaps BPS needs "targeted partnership" with state or even federal officials to help with specific programs and warned that if nothing is done, Boston could be facing action by the Justice Department.

Baker was even harsher in his criticism of BPS, and fellow councilors, whom he accused of running one-sided hearings at which DESE wasn't even given a chance to explain the issues it's concerned about, in a district that is unsafe, with kids who can't read and with graduation rates that suck.

"Let's not have the echo chamber that we're used to," he said. "Let's get some opposing views." He said he was not calling for a state takeover but that he doesn't understand how certain councilors can call for defunding police and yet continue to throw more money at a shrinking system.

Hogwash, Councilor Kendra Lara (Jamaica Plain, West Roxbury), said, referring to what she called "political theater from my colleagues." DESE was invited to a council committee hearing on receivership last month, but that it refused to send anybody, which she said was too bad because she was looking forward to hearing DESE explain why it has apparently failed to fulfill its side of a 2020 "memorandum of understanding" with BPS on how to deal with certain problem areas, and why DESE decided to conduct a detailed review that could lead to receivership earlier than it had earlier agreed to.

She said she opposes the idea of putting schools into state receivership, which she called "a failed model," based on the lack of success in the three communities where it's been done and "a roll of the dice" for school families and "an affront to the city of Boston" and "a slap in the face" of parents.

Councilor Erin Murphy (at large), herself a BPS student, parent and until recently, teacher, voted for the resolution, but said the whole BPS situation is "devastating," that BPS remains mired in severe problems "year after year, decade after decade," despite some amazing things going on in schools.

"I am standing on the side of the children," she said. "We have failed them. and it breaks my heart."

Councilor Kenzie Bok (Beacon Hill, Back Bay, Fenway, Mission Hill), acknowledged the problems BPS faces. "It is true we are facing deep challenges in BPS." But fixing its problems will take "deep, collaborative partnership work," not edicts from a state-appointed school czar.

Mejia, herself a BPS graduate and parent, rose again before the vote to say that fixing Boston schools will take hard work across city government. Referring to Flaherty's comment about how he's never seen BPS in such sad shape, she said she includes the City Council in that and asked where Flaherty was for all those years the schools were not performing as well as they could. "In many ways, the council has failed the Boston Public Schools as well," she said.

And their work ethic shows. They don’t want a school committee or state that takes away their control.

"In many ways, the council has failed the Boston Public Schools as well," she said.

DESE needs to step in.

DESE needs to step in.

The councilors can blather all that they want but the fact is that the city has failed these students day after day, year after year for decades.

Now suddenly they care about them and the new superintendent and administration deserve a chance.

This needs to get done for the students.

Mejia's got a point there

What were Flaherty and Baker proposing over the last few years that they think would have fixed this? Or is this just a "we've tried nothing, and we're all out of ideas" thing?

Bring back an elected school committee so the administration of the schools would be answerable to the people.

Be it the Mayor’s Office or DESE, BPS is being run by bureaucrats.

So based upon my personal experience over the last few years with two kids in the BPS at the Roosevelt the parents CAN make or break a school. Parents if a large number are active in supporting their kids can hold the administration accountable, help to raise money for specific initiatives and create a sense of community that busing kids to schools in different parts of the city than they live has added challenges to the system.

The administration needs to be reviewed and every person evaluated for their engagement and contributions to specific schools they are working at or with. Also their job descriptions need to be revamped to reflect current school needs and they need to consider teacher feedback more seriously.

My kids teachers have all been amazing and deserve more credit and pay than they currently get.

And last but not least BPS needs programs to address students with behavioral issues , language challenges and housing issues. So expand the schools to include some social services some kids desperately need to have a chance at improving academically.

into renovating schools and not teachers will improve BPS?

Can focus on teaching if the buildings are renovated instead of having to deal with cold or outdated classrooms. And hopefully some of the schools that don't have libraries, music and theatre spaces or up to date computer technology would be able to get them to bring BPS schools closer to a modern standard.

Why not just do both?

I remember when Madison Park was one of the nicer facilities in the state. All sorts of tech programs with a nice pool, gym, tv/music studio, etc. Then those tech programs are cut.

I've never understood why a good "trade" apprentice program could never get established. Have the students actually work for the city and learn/work that way. Think of all the buildings the city owns and all the work that could be done/learned there.

It still is a great facility

And it has empty seats every year.

What I've heard from BPS administrators that the issue is mostly to do with the culture in BPS of bias toward voc-tech education. In other communities, going to Minuteman, Blackstone, South Shore, etc. is considered an achievement and something to strive for, and these schools are pretty selective most years. In BPS, Madison is where you go if you didn't get in to an exam school or one of the humanities-focused schools that has a somewhat selective admissions process.

That needs to change then…

I haven’t heard that exactly but I believe you. And it’s backwards.

This is the most honest and truthful comment I have heard regarding BPS or any school or school system for that matter. Schools should be localized around neighborhoods and their families. You will always see more support and care when people can physically get to the school in an easier manner.

I have no faith in the mayor or city council fixing this problem. Why should we based on the city government’s track record since the beginning?

is the best way to get schools that are localized around neighborhoods and their families, as you put it.

I am not sold on the state doing it right either. I just know schools need to be attended by kids in the neighborhood where it is located and not sent across town, especially K-5. It hurts the school if it is not centered around the neighborhood.

Give them a chance to fix things...

I've heard this since I attended BPS, and we are still hearing it.
Our School System is a national Embarrassment and needs to be fixed.

There is zero accountability year after year and decade after decade. Massachusetts likes to talk about how great our schools are while being okay with kids in city schools being left behind. It does seem to be never ending.

By them I don't mean the administrators

To clarify I think the parents, politicians and teachers need to work together to oust the current administrators that are contributing to the problem. So give Mayor Wu a chance, Bps has had their chance, but receivership will likely drive the remaining good teachers and students / parents away from bps making things worse.

How's that been going for the past 20 years?

The Superintendent is the sacrificial lamb as usual and things remain the way they are.
We need someone from the outside to shake things up.

BPS is becoming a criminal enterprise

They are covering up crimes of physical and sexual assault on a regular basis and are building a proven track record.

They are actively not calling the police to report crimes that would be reported in any other situation or location.

When kids just used to hang out in the street
Wu calls for end of BPDA, 10% cap on rent increases in larger buildings, BPS improvements
City council could vote next month on plan to move school committee from appointed to elected
Consultant recommends BPS consider return of Boston school police
Oh for the days when you could enjoy a good cigar after lunch while waiting for your pants to be hemmed, then take the streetcar back home
Councilor Mejia sues Worcester-area blogger for libel