Citizen complaint of the day: The Leather District's panty tree 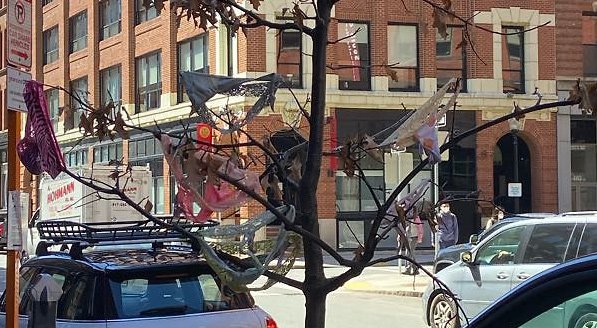 On April 9 of last year, a puzzled citizen filed a 311 report about a tree outside 112 South St. in the Leather District that had been laced with panties.

"Sorry for the weird report," the good citizen said (to which we can only say: "No, never apologize for a weird report!")

The city marked the case "closed" at 11:27 a.m. today, noting that, in the intervening nine months, the panties had disappeared.

I saw those frat boys

from Apha Grabba Thi, wearing what looked like strange hats in that neighborhood.

the falling panty leaves drift by the window....

Hmmm. Must've fallen off in the late Fall foliage.

Next to ski lifts

Over my lifetime riding chairlifts at ski areas I have seen these decorations over the years. First it was in the late '70's, and I was too young to understand why women would throw a bra on a tree from the lift in the cold. But it was a thing. Then, they were gone from the 80's until they began reappearing in the 2000's. Again, bra's at first. Then panties. Now I'm too old to understand. How and why would your panties end up on a tree next to the chairlift? Clearly there is planning in place--this is no crime of passion!

I never saw Tom Jones on a ski mountain.

Not from first hand knowledge

Not from first hand knowledge, but my understanding is at ski areas, the undergarments are not placed there by the young ladies in question. As for how someone other than the wearer would obtain such garments, if you don't know I'm not telling you.

If there's one thing the wearer knows

I have to imagine though that such chair lift actions would certainly change the experience going down. The mountain, I mean.

As a long-time rider of chairlifts and employee at ski areas, I'll let you in on the secret. When someone who frequents said ski area gets lucky, they may (if they're that kind of person) attempt to abscond with their partner's undergarment(s), and later throw them into the underwear tree. Since all of this is anonymous, it's a mark that some people who ride this chairlift are having fun, and that's pretty much it. However...

I used to work as a ski instructor teaching young kids. When you teach real young kids, one of your jobs is to get them hot chocolate on breaks, and you learn real fast that young kids have unlimited capacity to spill drinks on themselves. So, you give them not-full cups and warnings. My standard warning was, "Don't spill your hot chocolate, because if you spill your hot chocolate on yourself, I'm going to take you out to the woods and hang you up in a tree for the bears to eat." The kids loved it. "No you aren't!" "Yup. I do it all the time." "There aren't any bears!" "There are lots of bears, and there's nothing they love to eat more than kids dipped in hot chocolate." Et cetera. Silly fun.

Anyway, one day I was riding the quad with a couple of my kids and an adult resort guest. It was these kids' first time on the BIG chairlift, and we were coming up on the underwear tree, and I saw a chance to have some more fun. "You remember I told you about the tree where I hang the kids for the bears? That's it. There's the tree. That's all that's left." Kids: "Whooooaaah..."

Now, you have to remember that some of that underwear has been there for months if not years, and no longer resembles underwear as such -- it's just vague colorless rags. But there was some that still looked like underwear, so one little boy pipes up, "I see grown-up-lady underwear in that tree!"

Except when it isn't.

Except when it isn't.

Were they leather panties?

Were they leather panties?

Diners on Hudson Street in Chinatown could soon have three new options for getting a drink with their food
Lawrence man identified as Chinatown rape suspect
Man stabbed near the Chinatown Gate; suspect arrested
Panic at the nightclub on report of shots fired
Police hunt man as Chinatown rapist
Women sought for closing-time double stabbing in the Theater District