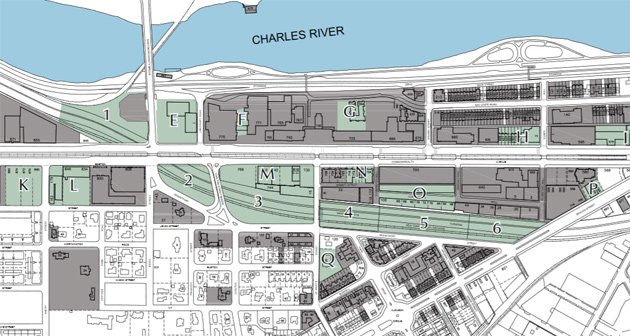 Possible BU expansion sites in green, including decks over the turnpike.

Boston University recently filed a 10-year, $1-billion "institutional master plan" that calls for a new research building, possibly up to 16 stories, and a new premium student dorm, along with an expansion of solar panels across the campus and a major rehab of the Warren Towers dorms on Commonwealth Avenue.

The University has a strong interest in the future development of air rights over the Turnpike.

The overall plan requires BPDA approval. Plans for specific new buildings would require additional approval by the BPDA and other city agencies.

The largest of the three proposed buildings, at up to 16 stories, would replace the College of Communications building on Commonwealth Avenue and a series of low-slung BU buildings along the turnpike on Cummington Mall between St. Mary's and Beacon Streets, with a larger science and engineering research building.

Another planned building: Student Village Residence III, up to 11 stories with beds for 523 students between 33 Harry Agganis Way and 10 Buick St. Student Village dorm rooms are designed for students with enough disposable income to afford the finer things in life, like air conditioning.

BU has also proposed replacing a parking lot at 250 Bay State Rd. with a new home for the Pardee School of Global Studies that could rise 11 stories.

BU says that it's already begun work on installing 1 MW worth of solar panels on buildings across its 113-acre, 1.5-mile linear campus along Commonwealth Avenue and that it's identified another 1.4 MW worth of electricity that could be generated from additional panels.

Also proposed: A major overhaul, in phases, of the three-tower Warren Towers dorms, including all new bathrooms and a new heating and ventilation system that could require a new 25-foot-tall "penthouse" on the roof to house machinery for the new system. The Mugar Library would also get a major upgrade under the plans.

BU also proposed turning what is now an alley running between Granby Street and Silber Way into a new pedestrian path:

The goal of the pedestrian way is to improve campus connectivity and provide a quiet, landscaped route connecting the Central Campus to the Questrom School of Business. The pedestrian way centers on the service alley running parallel to Commonwealth Avenue and Bay State Road. The way will need to remain accessible for service vehicles, but a substantial width is available by including rear yard areas adjacent to the alley. This portion of the pedestrian way will also provide an alternate route from Granby Street to the new pocket park being developed in mid-block along Commonwealth Avenue.

They need to build more dorms

They need to build more dorms for the students they have now and the ones the development will bring in.

If they're going to renovate

If they're going to renovate Warren Towers, I hope they bring back the Taco Bell. Things really haven't been the same since it got replaced by a Starbucks.

What they need to bring back..

Is Church's Fried Chicken.. there is a notable absence of fried okra in this city...

What parts of the city are you spending your time in?

Where’s the best places for fried Okra in Boston?

Since this cash soaked university stumbled into free naming rights for the Cottage Farm Bridge - maybe they maintain it?

Housing crisis.
2nd Most Expensive City in the U.S.

I need to examine the full IMP, but why would the state consider the use of public parcels, earthbound or otherwise, for use that excludes affordable housing in Boston?

Granted tax-exempt institutional and commercial use has always been the priority for the Boston Planning and Development Agency, but the Governor and the General Court need to put their food down.

We want institutions like BU to build more dorms since, as long as dorm beds increase more quickly than enrollment, this reduces demand for off-campus housing. By removing student demand for housing in the community, housing should be more affordable than it would be otherwise with fewer people competing for the same supply.

BU should definitely pay at least fair market rate to lease any air rights over the Turnpike. Then it's up to the Commonwealth to decide how that money ought to be spent.

Agree with this. This is the opportunity to create more student housing "on campus" and given that they've metastasized all over Kenmore and turned it into a mall, it would be great to stop them from spreading further out. Building on top of a highway (and then maintaining it all) ain't cheap so let their endowment pay for that. In return they should give up some of their properties around the edges (and in other parts of town) specifically for affordable housing (thinking of the apartments over on South Campus).

What is a premium student?

Foreign student, Boston is filled with them and colleges/universities are catering to them.

No, it's more likely

the offspring of Chinese Communist Party members, or Middle Eastern "royalty". Either way, they pay full freight, which greases the BU machinery.

I admire Boston University for being the great institution which it is. BU is a major part of what makes the City of Boston the world class city that it is, despite the maddening issues which we face. BU admits a substantial number of students who are Boston residents, and supports them with generous financial aid, including multiple full scholarships. They also foster my second favorite college hockey team, although they never should have dropped football, because now BC can only beat them in hockey, baseball, basketball, lacrosse, soccer, track, field hockey, gymnastics and moot court.

Let's not shine that Terrier Totem too much.

BU gives full rides to many Boston schoolkids who qualify owing that BU takes up a lot of valuable space in this city and does not pay real estate taxes. It is a way of currying favor with the city.

BU tries to spread the scholarships around to each of the Boston high schools but some schools don't get them because the top kid in the school can't qualify to enter academically.

I was thinking of what we used to call "Eurotrash".

That can't be accurate

There are more than two genders of people. An accurate count would at least include a nonbinary umbrella, as the MA Dept of Ed and the RMV use to collect data.

There's clearly bad data there, either as submitted to them or as reported by them.

I think you mean sex. "Gender" doesn't mean what it used to.

We know you're a transphobe and all, but at least try and be a little bit scientifically and historically accurate.

Biological sex has more than binary options. It isn't clearly defined either, as it depends whether we're looking at chromosomes, hormones, or genitalia, and these don't line up neatly as some people want them to.

Gender has typically had a wide array of expressions and identities throughout history, not necessarily assigned based on sex, in most times and places. The white colonizer/Christian supremacy ideas of rigid gender roles and cishet relationships being the only valid relationships is a relatively new phenomenon.

(And the bigger question of course is how anyone else's identity or expression hurts you.)

"White colonizers" did not invent sex, evolution did. Trying to pry sex-based rights away from women, and trying to suppress the right of same-sex attracted people to associate freely and express their sexuality safely, is just the same misogyny and homophobia that we fought to overcome in previous decades, behind a new mask. The new fundamentalists are the same as the old fundamentalists, if you're one of their targets.

Have a theory party with your pals, but stop trying to pretend that what you're doing isn't just hating women and gays. Nobody needs to follow your rules, no matter how much violence you bring to the table. Just go away.

What are you doing about the transphobia problem on your website?

I thought at first I was

I thought at first I was looking at a plan to build this all underground and I was really excited then I realized this is a map not a vertical blueprint.

Building over the Pike can be

Building over the Pike can be nice for the neighborhood, if it’s done right.

Buildings looming over Cummington Mall? Not so much.

Now we have to protect the scenic view of...a back alley on a college campus that's already surrounded by 4 or 5 story buildings? Ok, then.