Art has a message 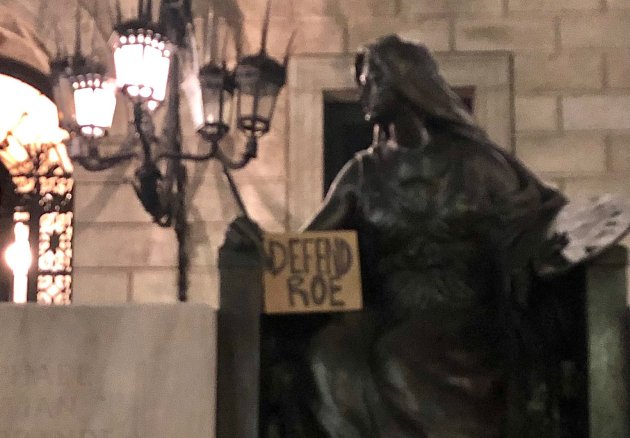 Emulsion Mike was walking through Copley Square last night when he noticed that the statue of Art outside the main library had a new sign (with several similar signs at her base).

I don't think Massachusetts is going to outlaw Abortions

Saying Abortion is not a constitutional right is not the same as saying it's illegal.
Roe made a law for all the states from the bench. Federal laws need to be passed first then challenged in court, Congress can pass a nationwide abortion law whenever they like.
They won't because they like passing tough decisions to the courts.

I don't Massachusetts will have a say in ~3 years

The GOP has made it absolutely clear the upcoming Roe decision is just the start. Several GOP members have come out to say intend to draft laws prohibiting it nationwide should they gain control of Congress and the White House. (Likely by 2025 given the Dems ineptitude.)

Police powers are reserved to the states through the 10th Amendment.

I've never been so eager to be proved wrong

The Dems messaging is horrible. Strictly from a policy standpoint, the Democrats are almost always represent a large majority of the American's views. But they let the GOP control the political narrative and constantly loose as a result.

Some believe in fighting for the rights of others

Some people believe in fighting for the rights of others even if it doesn't directly affect them (yet). Half of women in the US will most likely lose the right to abortion in their state if Roe is overturned.

In states like Missouri, lawmakers are already criminalizing women crossing state lines to get an abortion, and they will try to outlaw abortion federally ASAP by any means necessary.

We don't live in a democracy, friend. We live in a tyranny of the white Christian minority and it's time people stopped trivializing how bad it has gotten and how much worse it can get if we don't put a stop to it.

Yeah Pete. I know what you mean. I mean, the Christian minority has been busy with their tyranny lately. Years ago we had legalized gay marriage, cannabis, gambling halls, sports gambling, local breweries, alcohol delivery, tattoo parlors, blogs where we could post our thoughts, minority female mayors and the Wake up the Earth Festival in May.

Now those bastards have wiped that all away and our women have to wear head to toe coverings and be in the company of an adult male family member just to be seen in public. They can't go to school past the 5th grade and...wait...wha? That's not here? That is the Afghanistan Dear Leader Biden left behind. We still have all those things, and more?

FYI--Even Ruth the RBG argued that the Roe decision was badly chosen for review, badly written, and that it should be replaced by a different opinion. No, I'm not saying she would have approved of this. But she thought there were better ways to ensure a woman's availability to abortion than what those 9 men came up with. But she had wisdom and they were capricious.

You can look it up.

Yes, at least republicans are not as bad as the Taliban…

…yet. Such a strong argument, turtle.

The Democratic President did that to millions of women. You only offer concern about the ones you share geographic and cultural proximity with.

Your Democratic leader was just bragging about how he used to have lunch with "real segregationists."

His words, not mine.

That is the same as saying that the current Republicans that he has been calling Jim Crow 2.0 aren't really all that. It is just an applause line. They're not really "real".

The Republicans and the "Christian Theocracy" are not your problem. The remnant of the racist Jacksonian Democrats which still incorporate the core of your party is your problem.

Everyone here knows this turtle hates both parties, so don't try to move my shell.

The conspiracy theories get better and better

even as the supreme court moves to outlaw abortion and GOP leaders go on record saying they don’t plan to stop there, you argue… what, exactly?

between the attempted snark and the absurdism, it’s difficult to extract a coherent thought from what you’ve written.

I think Terrapin is saying

I think Terrapin is saying that people shouldn't be upset an extremely fundamental right is about to be destroyed in a way that threatens to bring other rights down with it, because we still have alcohol delivery and blogs.

not gonna lie, i love me some drizly

Now comes the part where we all throw our heads and laugh.

Unfortunately, in this case, it's very, very wrong. You've been lied to, same as everybody. Overturning Roe will just be the first step; the next steps will come quickly, and the forces currently pushing against Roe are very clear and open about what they will be. Roe has always just been the beginning. These are not reasonable people just trying to get out from under the boot of a coercive Supreme Court precedent and move on with their lives. They are aggressive, power-seeking "traditionalists" who seek to overthrow the way the United States has governed itself and interpreted its laws for at least the last hundred years, and replace it with a "traditionalist" system with their own self-proclaimed traditions at the top of the heap.

Political movements like this always take advantage of regular people's tendency to downplay threats and assume reasonableness and good faith on the part of others. We all tell ourselves "oh it won't be that bad" or "I'm sure we all just want to live our lives in peace", and that makes us very vulnerable to what's happening now. It will be that bad, and those who want to make it happen are telling us so to our faces. We need to listen, and defend ourselves.

I don't like it when people appropriate public property for their personal causes.

Normally sure but a piece of

Normally sure but a piece of public art that's literally called, Art, seems like a bit of an exception - art is always political.

I don't like it when people appropriate other people's bodies for their personal causes.

99% of abortions take place in the first 13 weeks.
The majority of abortions are by white women who state as the reason " not ready to have a baby".

Don't believe the Democrats hysterical theatrics. It's all propaganda.

...and 99% of covid deaths are old people who were gonna die soon anyway.

Orange Line seat-hog rage at Back Bay sends one to the hospital, shuts service
Lego bricks and mortar: Company to move US headquarters to Boston
Back Bay medical assistant charged with second patient sexual attack
Medical assistant at Back Bay health center charged with raping patient in exam room
Boston consulting firm hired by Twitter's old management sues because the new owner won't pay it for the work it did
City looks to permanently ban cars from Dartmouth Street in front of the BPL