Are morning rainbows rare or are we just too sleepy to see them? 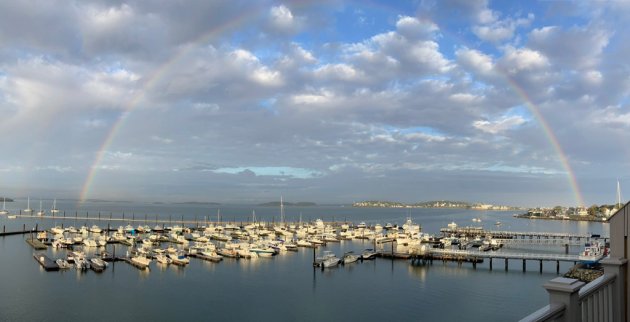 Early riser Joe Kidston captured the rainbow over the water in Hull this morning.

Or at least, rarer than afternoon rainbows, for a couple of reasons.

Think about the mechanism needed for a rainbow. You need falling rain from clouds, and then you need sun in enough of a proximity that it can shine in under the cloud and illuminate the rain which is still falling from said cloud at the end of the storm.

For an afternoon rainbow, this means that you need a clearing rainstorm, and generally a mesoscale storm (so, a thunderstorm or a front but not a nor'easter or something with a ton of clouds lingering) and you need it to be moving from west to east (which is the usual direction) so that the clouds clear away as the sun sets and can illuminate the rain.

When do thunderstorms tend to happen? In the afternoon, as the sun heats up the ground and causes air to rise, cool and form clouds, convection and rain. Given that we have westerly winds, this means that late afternoon and evening are in the sweet spot for rainbows, as the sun shines under the departing clouds. It's also why midday rainbows are rarer, they'd be not only closer to the ground, but the higher sun would likely shine on the clouds, not under them.

For a morning rainbow, there is a different set of circumstances. Diurnal showers or thunderstorms (caused by the heat of the day) won't work, and the axis of the storm has to be more north-to-south (east-to-west would be very unlikely). Today, we had the right sort of setup, a slow-moving low far to our northwest marching a cold front through, moisture ahead of the front streaming almost due north, but the storm far away enough it doesn't create a full cloud deck. This created a light shower over Hull around 8 a.m. and there was just enough clear sky in the right location for the sun to poke through the clouds, hit the shower, and create the rainbow.

I could see both ends!

I saw a morning rainbow today (Jan 17, 2023). I attached a picture. I live in the Southern Tier of NY. The sky was a little misty with some mix of rain and snow but not where I was. I can send you a picture when you email me.

In other South Shore news