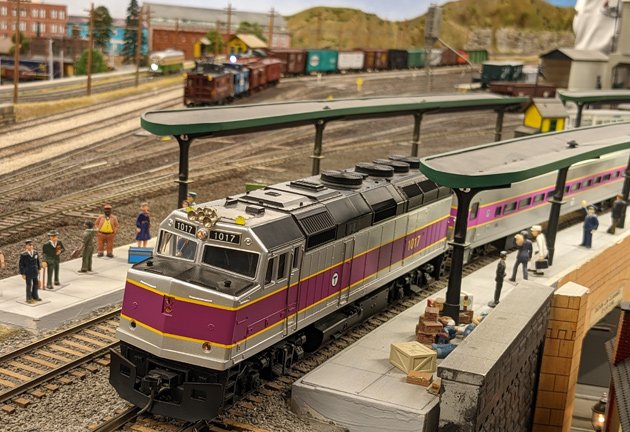 A commuter-rail train waits for passengers.

People lined up on South Street in Roslindale today for the open house at the Bay State Model Railroad Museum, what will once again be a twice-yearly event where museum members get to show off their O, HO and N-gauge trains and layouts to the public.

The open house did take respiratory viruses into account: It was held before Thanksgiving, and occupancy was limited to 50 at a time, both steps that the museum hopes would reduce the odds of Covid-19 or RSV spreading - especially among all the little kids who came to watch the trains go round.

As a Boston club, of course some of the displays had a Boston feel - such as this scene in front of the old Back Bay station (those green trucks are not Globe delivery trucks, though, but Railway Express Agency vehicles):

One display also pays homage to Roslindale Square, where an old BERy/MTA trolley made a turn:

School bus about to cross the tracks:

There was plenty of old-school loco action:

Museum members took position across the displays, dispatching the trains, including one way up on a mountain top:

Along the displays were controls to determine how trains would move through switches, such as this "wye."

Some gnomes waited patiently for an MTA trolley:

Does that model commuter rail

Does that model commuter rail engine break down every 3000 scale miles?

Do you have to wait 3 hours for it to show up on weekends?

Thank you for all the pictures. As a high-risk person who has to avoid large groups of people, I really appreciate being able to vicariously share some of the fun.

Here is a YouTube video of the March 2017 event.

a visit to the Wenham Museum, which is open all year long. (And yes, it is a short walk from an MBTA commuter train station.)

Storrowed trucks under the railroad bridges?

That old BERy/MTA trolley looks just like the ones that run between Mattapan and Ashmont stations today.

Does this mean South Station won't be getting a model railroad display this year? I used to love checking out those things when I worked in that area.

BPDA tells developer this isn't Dallas and it's not going to approve a plan to blast the hell out of a hillside on the Roslindale/Hyde Park line for a 'garden apartment' complex
Whadaya know? That trick with the boiling water on a frigid day really works
Condos and a new daycare approved as replacement for closed plumbing-supply store and daycare on Washington Street in Roslindale
With change in zoning-board members, developer tries again to win approval for Roslindale Square apartment building with no parking; says most of the units now will be affordable
Winter bloom at the Arboretum
Developer proposes to cut amount of parking at proposed Roslindale apartment building, but not because it's suddenly transit oriented