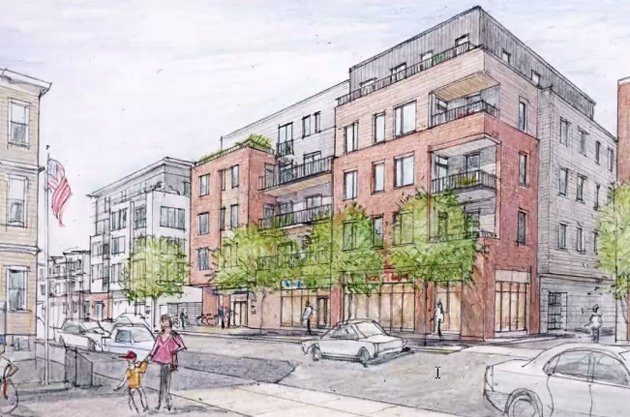 The Zoning Board of Appeal today approved a developer's plans to replace a parking lot at 279 Maverick St. in East Boston with a five-story, 32-unit apartment building.

MG2 Group's plans, approved by the BPDA in May, include five units to be rented to people making no more than 70% of the Boston area median income. Apartments will range from studios to 3-bedroom units.

The building will have a garage with room for 18 cars, using a "stacker" system, as well as four street-level spaces.

The city Office of Neighborhood Services said the project had received a number of letters of support, but also letters of opposition from people in New Hampshire.

"I'm curious as to why anyone from New Hampshire would weigh in on an East Boston project but who knows?" board Chairman Mark Erlich said. Erlich did not ask an office liaison in the meeting why people north of the border were opposed to the project and the liaison did not volunteer the information.

The building will replace a parking lot, next to a new building at 287 Maverick St. that won final city approval in 2018.

Tim Loranger, the Embarc architect on the project, said his design references that building but that he used a different colored facade so the two buildings didn't wind up looking like one large project.

That's a big back yard

The city Office of Neighborhood Service said the project had received a number of letters of support, but also letters of opposition from people in New Hampshire.

Those NH NIMBYs must have a pretty expansive definition of what's in their neighborhood.

Perhaps they think the project is in New Boston, which is a place in NH.

Maybe they heard Jaffrey, NH and really thought a large apartment building was out of character for the area.

Many suburban brats act like they own Boston. They complain about everything when they have no say over anything. They should be aggressively reminded their opinion doesn’t matter.
It’s funny how the reverse never happens. Can you imagine a Bostonian trying to get a construction project in New Hampshire stopped?

MG2 have bought 30% of East Boston, but have stopped buying in that area in the past year or two according to public records, but they have a property , a multi unit new building for sale for $30M , one of the most expensive properties for sale in Boston.

Adam, can you FOIA the public

Adam, can you FOIA the public comments in your copious free time? (Yes, onlookers, I'm fully aware that I can as well.) I think they would make an excellent read or marginal TP.