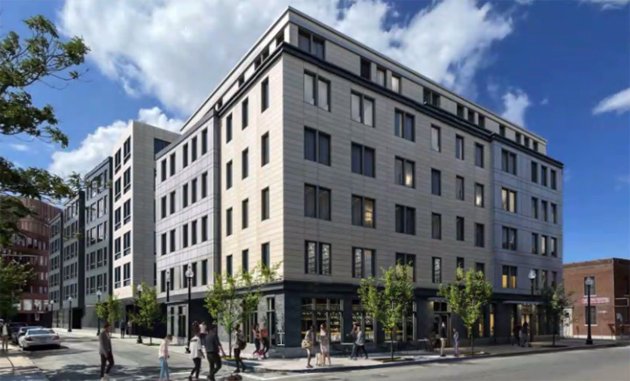 The Zoning Board of Appeal today approved a developer's proposal to replace a laundromat at 16 Taber St. at Harrison Avenue with a six-story condo building.

Klaus Kimel's $11.3-million proposal for 16 Taber St. also calls for ground-floor retail space and a garage with space for five cars in the proposed building, located about a block from the Nubian Square bus station.

Kimel's attorney, Patrick Mahoney, said people are willing to live in a building without a car when it's within an easy walk of a major transit hub. He said that of the roughly 40 condos sold so far at the neighboring 10 Taber St., which Kimel also built, only four have been bought by people with cars. He added that there is plenty of on-street and lot parking nearby.

Board Chairwoman Christine Araujo voted for the project, but said she is concerned that Nubian Square is seeing a lot of development, with projects all saying they don't need anywhere near the parking required by zoning and that at some point, the area might be overwhelmed with cars and no place to put them - which she said would be an issue not just for residents, but for businesses that rely on parking turnover for their customers. A BPDA representative said he did not come to the meeting expecting to be asked somebody like that, but promised to get an answer on whether the BPDA, which is in charge of overall planning in the city, is looking at the issue for a future meeting.

Well, Christine, maybe if the

Well, Christine, maybe if the city supported more transit friendly road design, those businesses could be served by people on busses. Insane that towns like Everett get bus lanes when the mayor just gets fed up and goes out to slap down some cones and here it's a multiyear million dollar process every time a block is added to our pretend attempts at BRT.

Buses. Get it right.

Transit friendly design? Washington Street north of Melena Cass, or about 800 feet north of here, has a dedicated bus lane all the way to Chinatown.

Well you didn't have to jump down her throat!

The plural of bus is buses. A variant plural, busses, is also given in the dictionary, but has become so rare that it seems like an error to many people.

I’m really grateful this was approved. I’m excited to see it built, and in my opinion more parking equals more problems. If people build more parking then more cars will come; a concept that all transportation experts agree with.

When I was in high school in 1995, a thing I was in did well at our thing and got a chance to go to LA, including going to Disneyland. I was from a community where not many people had been out of the area, been on a plane, etc., so this was super exciting.

My English teacher told me about how his family growing up would take a several-day car trip to Disneyland, and he would always tell them at the parking gate that "busses" was spelled wrong, and they shouldn't be offering such a thing, especially not for $18. He asked me to make sure to pass along this message.

I ended up doing one better. We didn't get to talk to the people at the parking gate, being on bus(s)es ourselves, but I took a picture of the sign. Shortly after I got back, I went to an office supply store and bought a vinyl S of the correct size and color, rubbed it around in some dirt a bit. I developed the photo and removed the S on the negative, then made an enlargement. I presented the photo and the S to my teacher.

I periodically hear from friends who teach at that school or have kids attending there that "the picture and the S eeka stole from Disneyland" is still up on his bulletin board.

parking isn't an issue then! Someone should tell Christine.

Board Chairwoman Christine Araujo [...] said she is concerned that [...] at some point, the area might be overwhelmed with cars and no place to put them

If/when we start to notice that happening, couldn't someone just like... build a parking garage? If demand for parking ever gets to that point I can't imagine it would be hard to find a developer willing to cash in. Concerns about maybe-someday parking demand should be a distant afterthought compared to the urgent-right-now-today housing demand.

One of the things that's happening in Nubian Square is the city is handing over all these long vacant lots and parking lots to developers in exchange for much greater than normal numbers of affordable units. Once that's all done, there wont be any room to build a parking garage.

There are still quite a lot

There are still quite a lot of vacant or underutilized lots around Nubian square, and not all of them are owned by the city. Presumably a private developer could build a garage on any one of them if there were actually sufficient demand to justify the cost.

there is plenty of on-street

there is plenty of on-street and lot parking nearby.

I hope everyone remembers that claim when this chicken comes home to roost.

New Councilor Tania Fernandes Anderson learns quickly how to play the game. According to ocpf.us, the developer contributed $1,000 to her on 7/29/21 while she was a candidate. Gentrification and displacement is well underway in Roxbury, and this building has the absolute minimum 13% "affordable" units (4 total) at 80 and 100% AMI, truly unaffordable to most members of the neighborhood.

It costs like twice as much to build one of these apartments as someone making 70% of AMI can afford to pay. That difference gets made up by the profits on the market rate units in the building. In JP or Cambridge where condos regularly sell for $600/sf and up, there’s enough of a margin to pay for 18 or even 20% of the units to be subsidized. In Nubian square that just isn’t possible yet, because the market price isn’t high enough. That said, I’m sure that after a few more years of adding tons of jobs and not that much housing, we’ll get there!

Night of burst pipes across Boston: Hospitals, theater, mall all hit
Boston to get a 24-hour Panera
Part of Blue Hill Avenue in Roxbury shut due to gas leak
Franklin Institute changes name to also honor a more recent donor
Police say guy had a gun loaded with 33 bullets when they came looking for him in Roxbury
Orange Line passengers need to wear raincoats these days