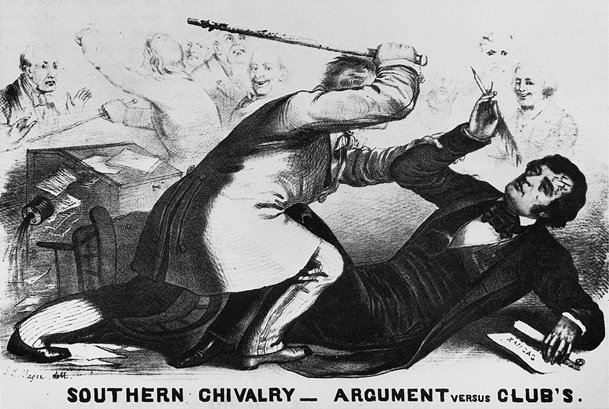 No, not Jan. 6, but May 22, 1856, when US Rep. Preston Brooks of South Carolina beat US Sen. Charles Sumner of Massachusetts with a gutta-percha stick on the floor of the Senate, after Sumner had insulted the family honor by declaring that Brooks' uncle, a South Carolina senator, had a mistress, "the harlot, Slavery."

Topics:
History
Ad:
Like the job UHub is doing? Consider a contribution. Thanks!

This is the "great America" the scam artists formerly known as the GOP want "again", including the slaving.

Let us know which party, historically, has embraced systemic racism and oppression of Black Americans.

Get back to us.

You need to come up with a better faux argument

I'm sorry you went to such a poorly run school that the history books all stopped in 1939. That must have been truly awful for you, and I hope that school has since gotten better funding and bought newer textbooks.

Yes, 150 years ago, the parties had differing views than they do now. But all those people are long dead. It's today's Republican party that backs white supremacy and voter suppression and, generally denies that the loser of the November elections was anything but a loser or that his supporters engaged in an attempt at violent insurrection on Jan. 6. Those weren't Democrats trying to kill cops on the steps of the Capitol.

I'm no fan of GOP, but the Dems are the ones who keep blacks down and in poverty. As for the lunatics at the Capitol, they amounted to about 150 people and nobody killed any cops. Your implication that progressives are the "pro-police" movement makes me laugh out loud. Pathetic.

Dems are the ones who keep blacks down and in poverty

The Color of Law?

Try to raise your eyebrow a hair next time someone whom you presume to be a registered Democrat, or even a D voter, uses the word "character" when talking about something that isn't printed letters or Muppets.

I have not read it

And obviously I cannot provide a cogent argument
for/against it for obvious reasons.

But, if the statement is “[X party] are the ones who keep blacks* down and in poverty”, who does the book posit is worse for Black Americans in 2021? Perhaps FDR was a dirt bag on race (he def was given the internment camps), but I have only been voting since the late 90s and, holy crap, I voted for GWB in 2000. I don’t look to FDR as an example of white leadership on race.

I can’t defend horrible actions by Democrats before I was born and before I started voting D, but who, out of the 2 major parties, are better for Black Americans in 2021?

I, personally, can’t answer that question, but the Black community can and I infer from the percentage of Black Americans who vote D and who voted for Joe Biden that it is not the Republican Party.

As for the lunatics at the

As for the lunatics at the Capitol, they amounted to about 150 people

...yet somehow over 400 people have been arrested for their actions that day... curious!

If you're not a fan of the GOP, you may want to check them out since they seem right up your alley. You both seem to be big fans of simply making up "alternative facts" regarding things about the world you don't like, which continually evolve and get more outlandish until they allow the thing in question to be dismissed entirely as never having existed in the first place. I assume a month from now only a couple dozen people will have rioted at the Capitol, and in six months it will have been just one lone guy wearing a t-shirt that said "Me = Antifa".

You must be pretty stupid

the Dems are the ones who keep blacks down and in poverty.

You must be pretty stupid if you think Black people can't tell which party has their interests in mind, and which party wants them to get fucked. Because make no mistake, they can tell.

You let my comment through. You usually cancel non-compliant comments. But it gives you a feeble attempt to reply.

Original post related to Sumner and “Black Republican” abolitionists. So sorry, actual understanding of history is on the table. Which excludes you. But explains why I went down gutta percha lane

So let’s fast forward to 2021, which means you don’t have to know more than today’s MSBC talking points.

Lori Lightfoid (D, Illinois) is choosing journalists to talk to based on race. Brown/black only. 2021. Check your calendar and party.

There's a difference between Democrats today and the GOP

Well, many, actually, but the key one here is that Democrats are willing to criticize their own, while Republicans, well, ask Liz Cheney about that.

What are you even talking about?

And then you allude to how the Democratic Chicago mayor is chosing to only grant interviews to black and brown journalists for the second anniversary of her inauguration.

How is Lori Lightfoot oppressing Black Americans here? Your disjointed s***posting is so incoherent it makes MagooSez look like Norman Mailer.

is that some weird red pill joke or is he just completely lost?

She was the chick from Full House who tried to get her hot daughter into college for no good reason.

And if you want to throw rocks...

I came up here. I lived here. I learned here. So stick your goober MAGA assumptions where the sun don’t shine.

Nice to see the Kilmer represents. A shame you stopped learning about history past the 1930s, though. I thought it was a better school than that.

Get back to us.

Who, you and the mouse in your pocket? Those of us who weren't napping for the past 50 years remember Barry Goldwater, Lee Atwater, the Southern Strategy, welfare queens, "states' rights", Philadelphia Mississippi, Willie Horton, "law and order", voter suppression, "makers and takers", Obama the "food stamp president", manufactured grievance, "they're not sending their best", right up to kung flu.

The Republican Party's goal for the past 65 years has been to destroy the New Deal, but that was difficult to do because, guess what, New Deal policies benefited the average person. To get white voters to vote against their own interest, the Republican Party deliberately adopted a strategy of using coded racism to get white voters to believe that government programs benefited Black people. And it worked like a charm. White voters voted Republican, voted for the destruction of government, because Republican candidates used coded language to stoke their grievance and direct it at non-white people, and got them to shoot themselves in the foot by destroying government programs that benefited white people just so that Black people couldn't get any benefit either.

Maybe they're referring to the 34 people they brought here to upvote that silliness. Imagine trying to argue the virtues of the gop underneath this particular cartoon... cripes.

Here's a little homework. What became of the dixiecrats and why?

And the Republican Party used to be pro-environment

but we're all aware that political alignments shift over the course of centuries, yes?

You used to be able to take the trolley down to Ebbets Field and see the Dodgers play for a buck, and if something used to be true, it must still be true today, so see you there!

I’ll think of Charles Sumner the next time I walk up Sumner Street.

To each his own Sumner, but if you’re talking the street in East Boston that’s named after the other Sumner, same one as the tunnel.