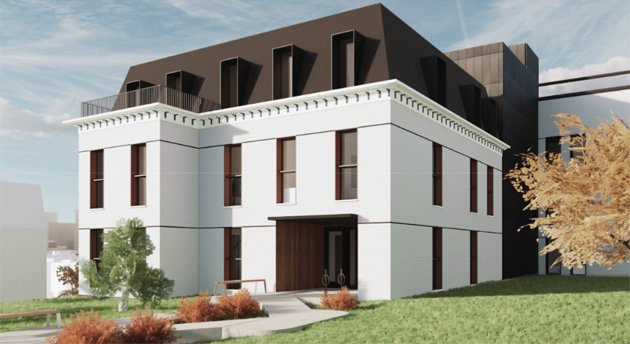 Plans by developer Ricky Beliveau of South Boston's Volnay Capital call for 15 parking spaces in a garage under the three-story building on what he says is now an "underutilized parcel."

The Proposed Project will fit the character of the neighborhood and provide needed housing units for the community.

The building would also have several private decks as well as a common roof deck for residents, who will get to enjoy "an unobstructed view of the Boston skyline."

His filing describes the building's design:

The proposed design blends the traditional New England vernacular with a contemporary gable roofline and exterior detailing. The massing along High Street seeks to reduce the perceived overall size of the structure, further softened by the meandering path and landscaped entry to the building. The faceted façade along North and South elevations provides rhythm and scale to the building, reminiscent of the row houses and triple decker homes further up the hill.

Beliveau hopes to begin a year of construction this spring. In addition to the BPDA, he will also need variances from the zoning board.

holy shit, that design is

holy shit, that design is awesome. THIS is the standard people should be holding developers to. No more of this pre-fab multicolor panel bullshit. SOME attempt at respecting the architectural heritage of one of the US's only actual historical cities.

if a little stark. Way better than the standard apartment building design we've been seeing.

But I kind of have the feeling they colored the first two stories white and the third dark so that it looks more like a two-story building at a glance. :-P

Goes with architectural style of many buildings in Dorchester/Roxbury.
("Goes with" as in "similar/complementary", not "identical")

Seems like a decent modern take on a mansard roof which are pretty common.

Thank you - I was drawing a

Thank you - I was drawing a blank trying to remember the term "mansard".

Among other visual tricks

Trying to make it look like a small building at a glance was one of their goals. And goal met.

It is really nice to see some architects actually trying. Good on Zephyr.

I don't particularly appreciate architects, but I appreciate what they've done here. This is a good look, and I hope it catches on.

I'm curious about what other techniques they used.

What else do you see?

That extension actually fits into a bump out in the weird-shaped lot. The tree you can see is in the neighboring lot.

That main door leads to a lobby that runs most of the length of the building, on the ground floor. The part that looks like a single house is one unit deep, and contains three floors of units above a parking level (plus an extra roof-level bedroom for a third floor unit). But then there are three more units behind it, all strung along that lobby, plus the one the bumps out on the right. I don't think it looks like that's what's going on at first glance - it doesn't look like the 'main house' part of it is hiding five times its bulk behind it.

Look at page 40 and 41 of the presentation for side and 3/4 top views showing all that's hidden behind that front house-looking part. It's like there's four more of them back there. Except they are all wider. And taller - even the roof steps up.

Sure, the building looks big, but they have well disguised how truly massive it is from the street.

When I saw Meetinghouse Hill my immediate worry was that some historic structure was being slated for demo but this is one that definitely deserves to go! It blends into the neighborhood way better than what's there and replacing a single-family with 15 condos is a fantastic step in the right direction in terms of adding housing.

My friend from St Peters

My friend from St Peters Grammar School lived there, good times, good times. Her dad amason, they moved to Hull when Social enginering, bigottry, drugs and crime destroyed our communitty. It was a wealthy community before we got there too, What goes around comes around.

Dorchester stabbing victim was resident of group home; death might have stemmed from fight with another resident
28 studio apartments proposed for Magnolia Street in Dorchester
Wanted man was tooling around Codman Square with a loaded gun, two knives, 86 extra rounds of live ammo and a spent shell, police say
Southern parts of Boston not being invaded; it just sounds like it
Man stabbed to death on Virginia Street in Dorchester
More Red Line stair problems: Part of Savin Hill staircase detaches and crashes to the ground, just missing rider