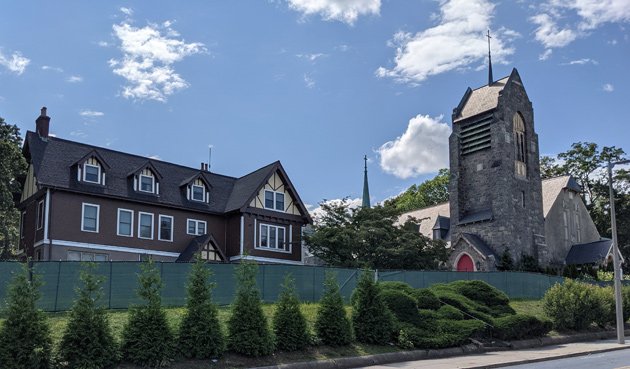 Our Lady of the Presentation rectory and church.

A West Roxbury developer has paid St. John's Seminary $4 million for the former Presentation Church and its rectory and parking lot on Washington Street in Brighton's Oak Square.

Peter Davos, who grew up in Brighton, has yet to say publicly what he plans for the 2.9 acres of land - roughly 1.8 acres for the former church and rectory grounds and 1.1 acres down a half block towards Newton for the parking lot, on a side of the street lined with large single-family homes.

Over the weekend, his West Brighton Acquisitions wrapped the two parcels with green fencing and put a sign in front of the church: "Please pardon our appearance while we work on our concept design and architectural plans."

However, one thing he can't put on the land is an abortion clinic. As a condition of the sale, the seminary attached a covenant to the deeds for the two parcels saying that for the next 99 years, the company.

[S]hall not use or permit the use of the Premises for (a) a church, chapel or other house of religious worship; (b) a facility at which abortions are performed;(c) the operations of professional counseling services which advocate abortion, euthanasia or suicide; (d) the operations of any embryonic stem cell research facility or services implementing embryonic stem cell research or (e) a school or educational facility serving children in grades K-12.

The archdiocese also prohibited a school when it sold the church's shuttered elementary school to a community group in 2007.

Davos is currently building a residential complex in West Roxbury that will include a 70-unit apartment building and 18 townhouses.

Construction of Our Lady of the Presentation parish began in 1913, designed by church architects Maginnis and Walsh and was completed in 1921. The archdiocese shut it in 2004 in the wake of the priest sex-abuse scandal.

In 2011, the archdiocese sold it for $1 to St. John's Seminary, which began work to turn it into a lecture hall and a library, in part with a $200,000 grant from Carolyn and Peter Lynch.

In 2013, the seminary formally dedicated the new St. John's Seminary Our Lady of the Presentation Lecture Hall and Library. At the time, the Boston Pilot reported, St. John's Seminary rector Msgr. James P. Moroney said it was good to be back in Oak Square and that the new building would help the seminary continue to "form" priests "for decades to come."

But the seminary only continued using the buildings for a few more years.

The church tower could use some work:

I wonder if and how they'll recuperate and reuse that nice stone when they tear the whole thing down to build rows of ticky-tack condos.

Or, put differently, this currently vacant unused large property in a desirable part of the city can be repurposed to house hundreds of people in dozens of families. City regulation will ensure a significant amount of these homes will be set apart for affordable housing.

But, of course your snarky sentiment is correct. Masshole NIMBY asshats would rather have the decaying church standing as a testament to the horror inflicted on children which caused the church to close it in the first place.

One could question if your sense of style is just that important.

When the catholics sold the

When the catholics sold the Blessed Sacrament Church campus in JP they also forbade using the building as a church. Why on earth would the catholics be opposed to a church building being used as a church? The result is that this building has sat derelict and unused for over 15 years, and has started to deteriorate to the extent that it’s now fenced off so no one is killed by falling stones.

If there's only one true church, then repurposing it as one of the others is profanation.

Not bitter, are you?

Not bitter, are you?

Shut down an orphanage because civilized people told them that they had to let homosexuals adopt kids. Also, the decades of documented actual child abuse.

My mind is not for rent to any God or government. I'll take a swipe at that hateful, dominionist pedo ring every damn chance I get. I'm eternally thankful that my mother and father never once sent or otherwise dragged me to an organized religious service.

My mind is not for rent to

My mind is not for rent to any God or government. I'll take a swipe at that hateful, dominionist pedo ring every damn chance I get.

Ironically, you just let them live rent-free in your head.
...and yes, it is hateful of you to call them a pedo ring. Criticize justly all they did wrong and/or didn't do right regarding sex abuse, but lay off the tiresome slurs, willya?

Yeah, they're squatting, and there's an eviction moratorium.

You’re delusional if you actually think the homophobic filth that continues to be uttered by the catholics, from the pope on down to the lowest of lows has made me bitter, any more than the hypocrisy of a tax exempt business that sits on trillions of dollars while people die of starvation and sickness has made me bitter. Like I said, I just think you’re shitty people.

It's not a universal prohibition

Over the other side of Jamaica Plain, St. Andrews is now the Bethel AME.

It does seem like an odd thing to prohibit.

My parish, St. Sava's Serbian Orthodox, is in a former Catholic Church. So glad they sold to us. We love our church!

I know of at least two near me: Reservoir Church on Rindge Avenue in North Cambridge (formerly Our Lady of Pity, a French-language parish) and Missionary Church of the Haitian Community on Winter Hill in Somerville (formerly St. Polycarp's parish)

Over the years, Archdiocese

Over the years, Archdiocese of Boston has been more relaxed about end use of buildings by other religions than some other conservative dioceses would. Some places would restrict to closely-aligned denominations. Boston has gone further over the years - Saint Andrew and Saint Polycarp (as a couple of the others mentioned), also Saint Leo's (now Pentecostal) and Saint William's (SDA) come to mind.
Other buildings have been converted to or replaced with shelters or housing (or bulldozed by urban renewal).
...and they got embarrassed on end-use a couple of times (didn't somebody flip a conversion in E Boston?).
...
On the flip side, there's a couple of Catholic church buildings in Boston that were conversions from other religions, so it actually does work both ways.

I don't remember what use

I don't remember what use restrictions the Archdiocese put on use of the Blessed Sacrament church building. It's certainly possible that there were some.
I do remember that there were contending ideas for use of the property. Somebody in the Archdiocese administration was in favor of working with the individual parcels (church, rectory, school, convent - whatever different things were part of it) to separate redevelopment (housing, community services...). I forget if any form of that included keeping the church building open as a Catholic church. Unfortunately, one of the other voices in the official mix (supposedly with real estate background) pushed for making it one big parcel, which contributes to the continued unused state. Said person was reputed to have had clumsy results in a couple of other redevelopment/reuse cases and I think has been eased out of the picture since then.

Does this only prohibit strawman providers who are like "yeah! get an abortion! they're cool!" or would this prohibit professionals who follow mainstream ethical guidelines and let people know that abortions are a safe and legal option?

Looking at the size of the lost, and the $1m+ houses on relatively small lots, seems like the developer got himself a bargain. Whether or not the existing buildings can/will be repurposed into condos-- with 1beds over its back fence selling for north of $600K-- the parking lot is a blank slate. Maybe it'll be turned into big single families? Or affordable housing? Ha, just kidding. We know that won't happen.

Getting divorced, fornicating, adultery -all fine because the church is just a political organization without any real beliefs I guess.

What isn't allowed in a deed

What isn't allowed in a deed restriction?

I know there can't be any racial restrictions. What about religious restrictions? Shouldn't that be protected by the first amendment?

Lake Street at BC lives up to name after water main bursts
Police hunt woman they say sliced open a Brighton cab driver's forehead with a butcher knife
A snow strawman in Brighton Center
Boston College pulls out of bowl game because it no longer has enough players to field a team
The early Boston bird catches the rapid Covid-19 test kit
The interpretation of development: Builder proposes Brighton apartment building to be called the Sigmund